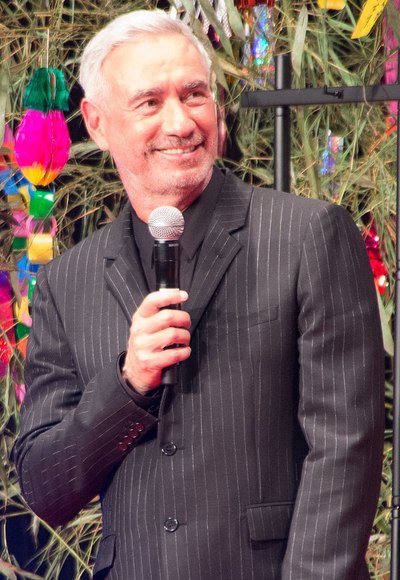 Roland Emmerich (German: [ˈʁoːlant ˈɛməʁɪç]; born November 10, 1955) is a German film director, screenwriter, and producer, widely known for his disaster films. His films, most of which are English-language Hollywood productions, have made more than $3 billion worldwide, including just over $1 billion in the United States, making him the country's 11th-highest-grossing director of all time. He began his work in the film industry by directing the film The Noah's Ark Principle (1984) as part of his university thesis and also co-founded Centropolis Entertainment in 1985 with his sister. He is a collector of art and an active campaigner for the LGBT community, and is openly gay.

Emmerich was born in Stuttgart, West Germany, and grew up in the nearby town of Sindelfingen. As a youth, he traveled extensively throughout Europe and North America on vacations financed by his father, Hans, the wealthy founder of a garden machinery production company. In 1977, he began attending University of Television and Film Munich with the intention of studying to become a production designer. After watching Star Wars, he instead decided to enroll in the school's film director program. Required to create a short film as his final thesis in 1981, he wrote and directed the full-length feature The Noah's Ark Principle, which was screened as the opening film of the 34th Berlin International Film Festival in 1984.

In 1985, he founded Centropolis Film Productions (now Centropolis Entertainment) in partnership with his sister, producer Ute Emmerich, and directed his major film debut, a fantasy feature named Joey. He subsequently directed the 1987 comedy Hollywood-Monster and the 1990 science-fiction film Moon 44. Theatrically, these were only released in and nearby his native country, although Emmerich filmed them in English and went against conventional German styles in an attempt to appeal to a larger market. This subsequently resulted in Moon 44 being released direct-to-video in the U.S. in early 1991. Joey and Hollywood-Monster eventually also saw home video releases in the U.S. (as Making Contact and Ghost Chase, respectively) once Emmerich achieved more prominence in America.

Producer Mario Kassar invited Emmerich to come to the United States to direct a futuristic action film entitled Isobar. Dean Devlin, who appeared in Moon 44, soon joined Emmerich as his writing and producing partner, and served in this capacity until 2000. Emmerich subsequently refused the offer to direct after producers rejected Devlin's re-write of the script, and the Isobar project was eventually scrapped. Instead, Emmerich was hired to replace director Andrew Davis for the action movie Universal Soldier. The film was released in 1992, and has since been followed by two direct-to-video sequels, a theatrical sequel, and another sequel released in 2010.

Emmerich next helmed the 1994 science-fiction film Stargate. At the time, it set a record for the highest-grossing opening weekend for a film released in the month of October. It became more commercially successful than most film industry insiders had anticipated, and spawned a highly popular media franchise.

Emmerich then directed Independence Day, an alien invasion feature, released in 1996, that became the first film to gross $100 million in less than a week and went on to become one of the most financially successful films of all time, at one point having been the second-highest-grossing film in terms of worldwide box office. Emmerich and Devlin then created the television series The Visitor, which aired on the Fox Network during 1997–1998 before being cancelled after one season.

His next film, Godzilla, opened in 1998. An extensive advertising and marketing campaign generated significant hype during the months leading up to the film's release. The film was a box office success but was met with negative reviews from critics and fans. It garnered a Saturn Award for Best Special Effects, a BMI Film Music Award, and the Audience Award for Best Director at the European Film Awards while also receiving a Razzie Award for Worst Remake or Sequel. It has only a 16% rating on Rotten Tomatoes.

Taking a short break from science-fiction, Emmerich next directed the American Revolutionary War epic The Patriot (2000). One of only four films (Universal Soldier, Anonymous and White House Down being the others) Emmerich has directed in which he did not contribute to the screenplay, the film received a generally favorable critical and commercial response, and is Emmerich's best-reviewed film to date. After teaming up with new screenwriting partner Harald Kloser, Emmerich returned once again to directing a visual effects-laden adventure with 2004's blockbuster The Day After Tomorrow, another disaster film about a rapidly oncoming ice age brought upon by the effects of global warming. Soon afterward, he founded Reelmachine, another film production company based in Germany.

In 2008, Emmerich directed 10,000 BC, a film about the journeys of a prehistoric tribe of mammoth hunters. It was a box office hit, but consistently regarded by professional critics as his worst film, as well as one of the worst films of the year. He was slated to direct a remake of the 1966 science-fiction film Fantastic Voyage, but the project slipped back into development hell. In 2009, Emmerich directed 2012 an apocalyptic disaster film based on the conspiracy theory that the ancient Mayans prophesied the world's ending on December 21, 2012. Despite mixed reviews, the film went on to be his second-highest-grossing film to date (after Independence Day) and received praise from audiences. Emmerich usually finishes production of a large-scale movie both in a time frame shorter and on a budget lower than what is typically requested by other directors.

Emmerich's next film, Anonymous, released on 28 October 2011, is based on the premise that Edward de Vere, 17th Earl of Oxford is the real author of the plays and sonnets of William Shakespeare. According to Emmerich, "It's an historical thriller because it's about who will succeed Queen Elizabeth and the struggle of the people who want to have a hand in it. It's the Tudors on one side and the Cecils on the other, and in between [the two] is the Queen. Through that story we tell how the plays written by the Earl of Oxford ended up labelled 'William Shakespeare.'" The release date for Anonymous coincided with the completion of the 13th Baktun, the date which marks the empirical base for Emmerich's film 2012, as this is celebrated by the surviving indigenous Maya, specifically the Quiché people.

Emmerich directed the action-thriller film White House Down, which involved an assault on the White House by a paramilitary group. The spec script was written by James Vanderbilt and was purchased by Sony Pictures for $3 million in March 2012. The Hollywood Reporter called it "one of the biggest spec sales in quite a while". The journal said the script was similar "tonally and thematically" to the films Die Hard, Air Force One and Olympus Has Fallen (2013). Emmerich began filming in July 2012 at the La Cité Du Cinéma in Montreal, Quebec, Canada. The film was released on June 28, 2013 in the United States. Emmerich's most recent film, Independence Day: Resurgence, the sequel to Independence Day, was released on June 24, 2016.

Emmerich owns homes in Los Angeles, New York City, London and Stuttgart. He likes to decorate his homes in a self-described "outlandish" manner, adorning them with rare Hollywood memorabilia, murals and portraits of dictators and Communist figures, and World War II militaria.

Emmerich's extensive collection of artwork includes a painting of Jesus Christ wearing a Katharine Hamnett-styled T-shirt during his crucifixion, prints of Alison Jackson's works of a Princess Diana lookalike making obscene gestures and engaging in sex acts, a wax sculpture of Pope John Paul II laughing as he reads his own obituary, and a Photoshopped image of Iranian president Mahmoud Ahmadinejad in a homoerotic pose. Emmerich, who is openly gay, and a financial supporter of U.S. progressive politics, states that the decorations and pieces are not declarations of any beliefs, but rather reflections of his "predilection for art with a political edge".

Emmerich has claimed that he witnessed overt racism when producers and studio executives were opposed to allowing him to cast Will Smith for the lead in Independence Day, and reluctant to allow him to portray an interracial couple in The Day After Tomorrow. He has also claimed that he has encountered homophobia from the same groups, and is vocal in his opposition of such behavior. He has stated that sometimes he does "[not like working in] the movie business", describing it as a sometimes "very cold, brutal business", but his motivation to keep directing is that he genuinely "like[s] making movies".

In 2006, he pledged $150,000 to the Legacy Project, a campaign dedicated to gay and lesbian film preservation. Emmerich made the donation on behalf of Outfest, making it the largest gift in the festival's history. In 2007, on behalf of the LGBT community, he held a fundraiser at his Los Angeles home for Democratic Party presidential candidate Hillary Clinton.

Emmerich is in favor of the campaign for stunt performers to receive recognition at the Academy Awards, and has worked to raise awareness over the issue of global warming. He once was a chain-smoker who was known to smoke as many as four packs of cigarettes a day, Emmerich has often included in his films characters who are trying to quit smoking or warn against the dangers of tobacco use. Along with several other celebrities, he is a producer of The 1 Second Film, a non-profit project intended to raise money for women's rights in the developing world.