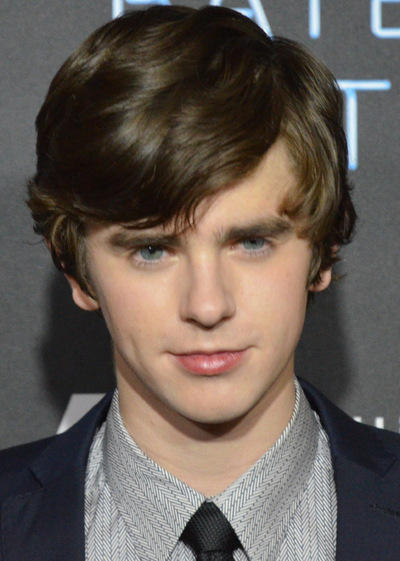 Highmore was born on 14 February 1992 into a show business family. His mother, Sue Latimer, is a talent agent whose clients include actors Daniel Radcliffe and Imelda Staunton, and his father, Edward Highmore, is an actor. He has a younger brother named Albert ("Bertie"), born in 1995. Highmore's home is in Highgate, an area of North London.

Highmore was educated at a primary school in Hampstead Garden Suburb in Hampstead in North London, and at Highgate School, an independent school for boys in Highgate (also in North London), followed by Emmanuel College at the University of Cambridge, where he studies Spanish and Arabic.

Highmore began with small parts on TV at the age of 7. He made his acting debut in Women Talking Dirty in 1999, playing the son of a woman, played by actress Helena Bonham Carter, who was recently estranged from her commitment-phobic French lover. In 2001, Highmore played a young King Arthur in the made-for-TV miniseries, The Mists of Avalon, a revisionist take on the Arthurian legends that depicted the women of Camelot as the real power behind the throne.

In 2004, he had a breakthrough with his critically acclaimed performance as troubled Peter Llewelyn Davies in Finding Neverland. Highmore received several nominations and awards for the role, including a Broadcast Film Critics' Award and a Screen Actors Guild Award nomination. In 2005, he played the part of the hard-working Charlie Bucket in Charlie and the Chocolate Factory (adapted from the book by Roald Dahl). He was reportedly recommended for the role by the film's star Johnny Depp, who starred in Finding Neverland and was impressed by the young actor's performance.