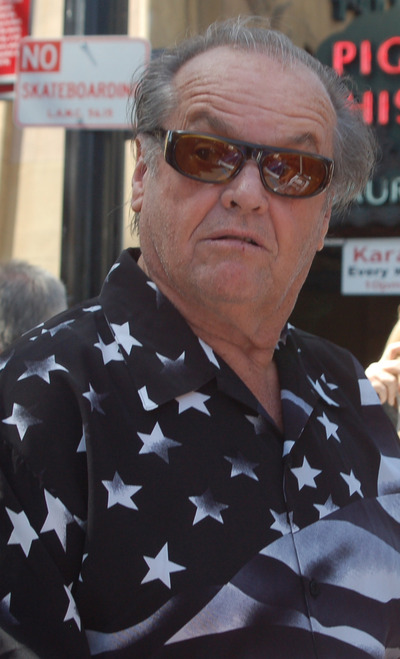 John Joseph "Jack" Nicholson (born April 22, 1937) is an American actor, film director, producer, and writer. Throughout his career, Jack Nicholson has portrayed unique and challenging roles; many of which include dark portrayals of neurotic and/or psychopathic characters. Nicholson's twelve Oscar nominations make him the most nominated male actor.

Nicholson has twice won the Academy Award for Best Actor, for One Flew Over the Cuckoo's Nest and for As Good as It Gets. He also won the Academy Award for Best Supporting Actor for the 1983 film Terms of Endearment. He is tied with Walter Brennan and Daniel Day-Lewis for most acting wins by a male actor (three). Nicholson is well known for playing villainous roles, such as Frank Costello in The Departed, Jack Torrance in The Shining and the Joker in 1989's Batman.

Nicholson was one of only two actors to be nominated for an Academy Award for acting in every decade from the 1960s to 2000s; the other being Michael Caine. He has won six Golden Globe Awards, and received the Kennedy Center Honor in 2001. In 1994, he became one of the youngest actors to be awarded the American Film Institute's Life Achievement Award. Notable films in which he has starred include Easy Rider, Five Easy Pieces, The Last Detail,Chinatown, The Passenger, The Shining, Reds, Wolf, A Few Good Men, The Pledge, About Schmidt and The Departed.

Nicholson was born in New Jersey, the son of a showgirl, June Frances Nicholson (stage name June Nilson). June had married Italian American showman Donald Furcillo (stage name Donald Rose) six months earlier in Elkton, Maryland, on October 16, 1936. Furcillo was already married. Although he reportedly offered to take care of the child, June's mother Ethel insisted that she bring up the baby, partly so that June could pursue her dancing career. Although Furcillo claimed to be Nicholson's father and to have committed bigamy by marrying June, biographer Patrick McGilligan asserted in Jack's Life that Latvian-born Eddie King (originally Edgar A. Kirschfeld), June's manager, may have been Nicholson's biological father. Other sources suggest June Nicholson was unsure of who the father was. Nicholson's mother was of Irish, English, and Pennsylvania Dutch descent, though he and his family reportedly self-identified as Irish.

Nicholson was brought up believing that his maternal grandparents, John Joseph Nicholson (a department store window dresser in Manasquan, New Jersey) and Ethel May (née Rhoads, a hairdresser, beautician and amateur artist in Manasquan), were his parents. Nicholson only discovered that his "parents" were actually his grandparents and his sister was in fact his mother in 1974, after a journalist for TIME magazine who was doing a feature on Nicholson informed him of the fact. By this time, both his mother and grandmother had died (in 1963 and 1970, respectively). Nicholson has stated he does not know who his biological father is, saying "Only Ethel and June knew and they never told anybody", and has chosen not to have a DNA test or to pursue the matter.

Nicholson grew up in Neptune City, New Jersey. He was raised in his mother's Roman Catholic religion. Before starting high school, his family moved to an apartment in Spring Lake, New Jersey. "Nick", as he was known to his high school friends, attended nearby Manasquan High School, where he was voted "class clown" by the Class of 1954. He was in detention every day for a whole school year. A theatre and a drama award at the school are named in his honor. In 2004, Nicholson attended his 50-year high school reunion accompanied by his aunt Lorraine.

When Nicholson first came to Hollywood, he worked as a gofer for animation legends William Hannaand Joseph Barbera at the MGM cartoon studio. Seeing his talent as an artist, they offered Nicholson a starting level position as an animation artist. However, citing his desire to become an actor, he declined.

He made his film debut in a low-budget teen drama The Cry Baby Killer, in 1958, playing the title role. For the following decade, Nicholson was a frequent collaborator with the film's producer, Roger Corman. Corman directed Nicholson on several occasions, most notably in The Little Shop of Horrors, as masochistic dental patient and undertaker Wilbur Force.

With his acting career heading nowhere, Nicholson seemed resigned to a career behind the camera as a writer/director. His first real taste of writing success was the screenplay for the 1967 film The Trip (directed by Corman), which starred Peter Fonda and Dennis Hopper. However, after a spot opened up in Fonda and Hopper's Easy Rider, it led to his first big acting break. Nicholson played hard-drinking lawyer George Hanson, for which he received his first Oscar nomination. The part of Hanson was a lucky break for Nicholson - the role had in fact been written for actor Rip Torn, who was a close friend of screen writer Terry Southern, but Torn withdrew from the project after a bitter argument with the film's director and co-star Dennis Hopper. In interview, Nicholson later acknowledged the importance of being cast in Easy Rider: "All I could see in the early films, before Easy Rider, was this desperate young actor trying to vault out of the screen and create a movie career."

Former California Governor Arnold Schwarzenegger and First Lady Maria Shriver announced on May 28, 2008, that Nicholson would be inducted into the California Hall of Fame, located at The California Museum for History, Women and the Arts. The induction ceremony took place on December 15, 2008, where he was inducted alongside 11 other legendary Californians.

In 2010, Nicholson was inducted into the New Jersey Hall of Fame.

In 2011, Nicholson received an honorary Doctor of Fine Arts degree from Brown University at its two hundred and forty-third commencement. At the ceremony Ruth Simmons, Brown University's president, called him, "the most skilled actor of our lifetime."