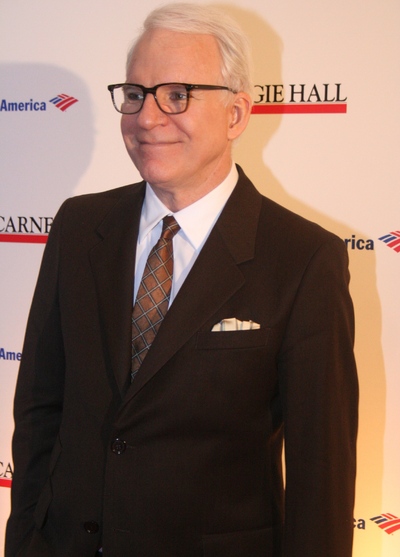 Martin came to public notice as a writer for the Smothers Brothers Comedy Hour, and later became a frequent guest on The Tonight Show. In the 1970s, Martin performed his offbeat, absurdist comedy routines before packed houses on national tours. Since the 1980s, having branched away from stand-up comedy, Martin has become a successful actor, as well as an author, playwright, pianist and banjo player, eventually earning him an Emmy, Grammy and American Comedy awards, among other honors.

In 2004, Comedy Central ranked Martin at sixth place in a list of the 100 greatest stand-up comics. He was awarded an honorary Oscar at the Academy’s 5th Annual Governors Awards in 2013.

While he has played banjo since an early age, and included music in his comedy routines from the beginning of his professional career, he has increasingly dedicated his career to music in the past decade and a half; acting less and spending much of his professional life playing banjo, recording and touring with various bluegrass acts, including Earl Scruggs, with whom he won a Grammy for Best Country Instrumental Performance in 2002. He released his first solo music album, The Crow: New Songs for the 5-String Banjo, in 2009, for which he won the Grammy Award for Best Bluegrass Album.

Martin was born on August 14, 1945 in Waco, Texas, the son of Mary Lee (née Stewart) and Glenn Vernon Martin, a real estate salesman and aspiring actor. Martin was raised in Inglewood, California, and then later in Garden Grove, California, in a Baptist family. Martin was a cheerleader of Garden Grove High School. One of his earliest memories is of seeing his father, as an extra, serving drinks onstage at the Call Board Theatre on Melrose Place. During World War II, in England, Martin's father had appeared in a production of Our Town with Raymond Massey. Years later, he would write to Massey for help in Steve's fledgling career, but would receive no reply. Expressing his affection through gifts of cars, bikes, etc., Martin's father was stern, and not emotionally open to his son. He was proud but critical, with Martin later recalling that in his teens his feelings for his father were mostly ones of hatred. Martin's first job was at Disneyland, selling guidebooks on weekends and full-time during the school's summer break. That lasted for three years (1955–58). During his free time he frequented the Main Street Magic shop, where tricks were demonstrated to potential customers. By 1960, he had mastered several of the tricks and illusions, and took a paying job at the Magic shop in Fantasyland in August. There he perfected his talents for magic, juggling, and creating balloon animals in the manner of mentor Wally Boag, frequently performing for tips. In his authorized biography, close friend Morris Walker suggests that Martin could "be described most accurately as an agnostic [...] he rarely went to church and was never involved in organized religion of his own volition".

After high school graduation, Martin attended Santa Ana Junior College, taking classes in drama and English poetry. In his free time, he teamed up with friend and Garden Grove High School classmate Kathy Westmoreland to participate in comedies and other productions at the Bird Cage Theatre. He joined a comedy troupe at Knott's Berry Farm. Later, he met budding actress Stormie Sherk, and they developed comedy routines and became romantically involved. Sherk's influence caused Martin to apply to the California State University, Long Beach, for enrollment with a major in Philosophy. Stormie enrolled at UCLA, about an hour's drive north, and the distance eventually caused them to lead separate lives.

Inspired by his philosophy classes, Martin considered becoming a professor instead of an actor-comedian. His time at college changed his life. "It changed what I believe and what I think about everything. I majored in philosophy. Something about non-sequiturs appealed to me. In philosophy, I started studying logic, and they were talking about cause and effect, and you start to realize, 'Hey, there is no cause and effect! There is no logic! There is no anything!' Then it gets real easy to write this stuff, because all you have to do is twist everything hard—you twist the punch line, you twist the non sequitur so hard away from the things that set it up". Martin recalls wondering in a psychology class "What if there were no punch lines? What if there were no indicators? What if I created tension and never released it? What if I headed for a climax, but all I delivered was an anticlimax? What would the audience do with all that tension? Theoretically, it would have to come out sometime. But if I kept denying them the formality of a punch line, the audience would eventually pick their own place to laugh, essentially out of desperation." Martin periodically spoofed his philosophy studies in his 1970s stand-up act, comparing philosophy with studying geology. "If you're studying geology, which is all facts, as soon as you get out of school you forget it all, but philosophy you remember just enough to screw you up for the rest of your life."

In 1967, Martin transferred to UCLA and switched his major to theater. While attending college, he appeared in an episode of The Dating Game. Martin began working local clubs at night, to mixed notices, and at twenty-one he dropped out of college.

In 1967, his former girlfriend Nina Goldblatt, a dancer on The Smothers Brothers Comedy Hour, helped Martin land a writing job with the show by submitting his work to head writer Mason Williams. Williams initially paid Martin out of his own pocket. Along with the other writers for the show, Martin won an Emmy Award in 1969, aged 23. He also wrote for John Denver (a neighbor of his in Aspen, Colorado, at one point), The Glen Campbell Goodtime Hour, and The Sonny and Cher Comedy Hour. Martin's first TV appearance was on The Steve Allen Show in 1969. He says: "[I] appeared on The Virginia Graham Show, circa 1970. I looked grotesque. I had a hairdo like a helmet, which I blow-dried to a puffy bouffant, for reasons I no longer understand. I wore a frock coat and a silk shirt, and my delivery was mannered, slow and self-aware. I had absolutely no authority. After reviewing the show, I was depressed for a week." During these years his roommates included comedian Gary Mule Deer and singer/guitarist Michael Johnson. Martin opened for groups such as The Nitty Gritty Dirt Band, The Carpenters, and Toto. He appeared at San Francisco's The Boarding House, among other venues. He continued to write, earning an Emmy nomination for his work on Van Dyke and Company in 1976.

In the mid-1970s, Martin made frequent appearances as a stand-up comedian on The Tonight Show Starring Johnny Carson, and on The Gong Show, HBO's On Location, The Muppet Show, and NBC's Saturday Night Live (SNL). SNL '​s audience jumped by a million viewers when he made guest appearances and was one of the most successful SNL hosts. Martin appeared on 27 Saturday Night Live shows and he guest-hosted 15 times, bested only in number of presentations by host Alec Baldwin (who has hosted 16 times as of September 2011). On the show, Martin popularized the air quotes gesture, which uses four fingers to make double quote marks in the air. While on the show Martin became close with several of the cast members, including Gilda Radner. On the day Radner died of ovarian cancer in 1989, a visibly shaken Martin hosted SNL and featured footage of himself and Radner together in a 1978 sketch.

By the end of the 1970s, Martin had acquired the kind of following normally reserved for rock stars, with his tour appearances typically occurring at sold-out arenas filled with tens of thousands of screaming fans. But unknown to his audience, stand-up comedy was "just an accident" for him; his real goal was to get into film.

Martin had a small role in the 1972 film Another Nice Mess. His first substantial film appearance was in a short titled The Absent-Minded Waiter (1977). The seven-minute-long film, also featuring Buck Henry and Teri Garr, was written by and starred Martin. The film was nominated for an Academy Award as Best Short Film, Live Action. He made his first substantial feature film appearance in the musical Sgt. Pepper's Lonely Hearts Club Band, where he sang The Beatles' "Maxwell's Silver Hammer". In 1979, Martin co-wrote and starred in The Jerk, directed by Carl Reiner. The movie was a huge success, grossing over $100 million on a budget of approximately $4 million.

Stanley Kubrick met with him to discuss the possibility of Martin starring in a screwball comedy version of Traumnovelle (Kubrick later changed his approach to the material, the result of which was 1999's Eyes Wide Shut). Martin was executive producer for Domestic Life, a prime-time television series starring friend Martin Mull, and a late-night series called Twilight Theater. It emboldened Martin to try his hand at his first serious film, Pennies from Heaven, based on the 1978 BBC serial by Dennis Potter. He was anxious to perform in the movie because of his desire to avoid being typecast. To prepare for that film, Martin took acting lessons from director Herbert Ross, and spent months learning how to tap dance. The film was a financial failure; Martin's comment at the time was "I don't know what to blame, other than it's me and not a comedy."

Martin was in three more Reiner-directed comedies after The Jerk: Dead Men Don't Wear Plaid in 1982, The Man with Two Brains in 1983 and All of Me in 1984, possibly his most critically acclaimed comic performance to date. In 1986, Martin joined fellow Saturday Night Live veterans Martin Short and Chevy Chase in ¡Three Amigos!, directed by John Landis, and written by Martin, Lorne Michaels, and singer-songwriter Randy Newman. It was originally entitled The Three Caballeros and Martin was to be teamed with Dan Aykroyd and John Belushi. In 1986, Martin was in the movie musical film version of the hit Off-Broadway play Little Shop of Horrors (based on a famous B-movie), playing the sadistic dentist, Orin Scrivello. The film was the first of three films teaming Martin with Rick Moranis. In 1987, Martin joined comedian John Candy in the John Hughes movie Planes, Trains and Automobiles. That same year, Roxanne, the film adaptation of Cyrano de Bergerac which Martin co-wrote, won him a Writers Guild of America Award. It also garnered recognition from Hollywood and the public that he was more than a comedian. In 1988, he performed in the Frank Oz film Dirty Rotten Scoundrels, a remake of Bedtime Story, alongside Michael Caine.

Martin was romantically involved with actress and singer Bernadette Peters, his costar in the films The Jerk and Pennies from Heaven, during the 1970s and early 1980s. He married actress Victoria Tennant on November 20, 1986, and the union lasted until their divorce in 1994. On July 28, 2007, after three years together, Martin married Anne Stringfield, a writer and former staffer for The New Yorker magazine. Former Nebraska Senator Bob Kerrey presided over the ceremony at Martin's Los Angeles home. Lorne Michaels, creator of Saturday Night Live, was best man. Several of the guests, including close friends Tom Hanks, Eugene Levy, comedian Carl Reiner, and magician/actor Ricky Jay were not informed that a wedding ceremony would take place. Instead, they were told they were invited to a party, and were surprised by the nuptials.[66] At age 67, Martin became a father for the first time when Stringfield gave birth in December 2012.

Martin has been an avid art collector since 1968, when he bought a print by the Los Angeles artist Ed Ruscha. In the first public display of his collection, the Bellagio Gallery of Fine Art presented a five-month exhibit of 28 works by Roy Lichtenstein, Pablo Picasso, David Hockney, and Edward Hopper, among others, in 2001. In 2006, he sold Hopper's Hotel Window (1955) at Sotheby's for $26.8 million.