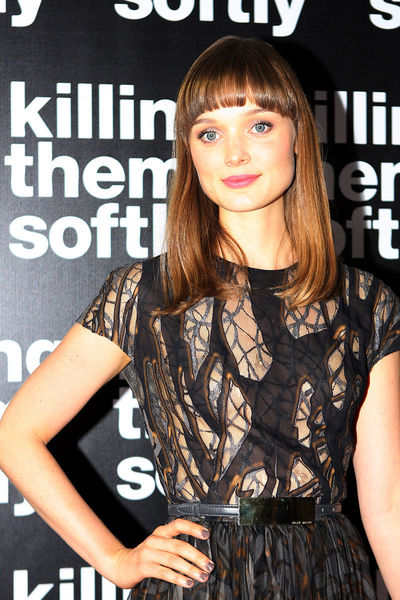 Isabella "Bella" Heathcote (born 27 May 1987) is an Australian actress. She began her acting career in 2008. The following year, she had a recurring role as Amanda Fowler on the television soap opera Neighbours. Heathcote played Victoria Winters in Tim Burton's film adaptation of Dark Shadows, Jane Bennett in Pride and Prejudice and Zombies, and Gigi in The Neon Demon. She plays Nicole Becker in The Man in the High Castle and will appear in the upcoming film Fifty Shades Darker.

Heathcote was born in Melbourne, Australia. Her father was a lawyer. She attended Korowa Anglican Girls' School. She began her career in 2008. In May 2010, she was a recipient of a Heath Ledger Scholarship.

In December 2010, Heathcote was cast in David Chase's film Not Fade Away. In February 2011, Tim Burton selected Heathcote to play Victoria Winters and Josette du Pres in his film adaptation of Dark Shadows, starring opposite Johnny Depp, Michelle Pfeiffer, and Helena Bonham Carter. She was later cast in Nicolas Winding Refn's thriller film The Neon Demon, which was released in 2016.

Heathcote was named as one of the 10 Actors to Watch: Breakthrough Performances of 2012 at the 20th Hamptons International Film Festival. The following year, she starred alongside Max Minghella in The Killers' music video for "Shot at the Night". Heathcote was part of the Spring/Summer 2014 campaign for Miu Miu alongside fellow actresses Lupita Nyong'o, Elle Fanning and Elizabeth Olsen.

In February 2016, Heathcote was cast as Leila Williams in the upcoming film Fifty Shades Darker, the sequel to Fifty Shades of Grey. She also joined the season 2 cast of television drama The Man in the High Castle, as Nicole Becker, a Berlin-born filmmaker. In October, it was announced Heathcote had been cast in the 2017 biographical film Professor Marston & The Wonder Women as Olive Byrne.