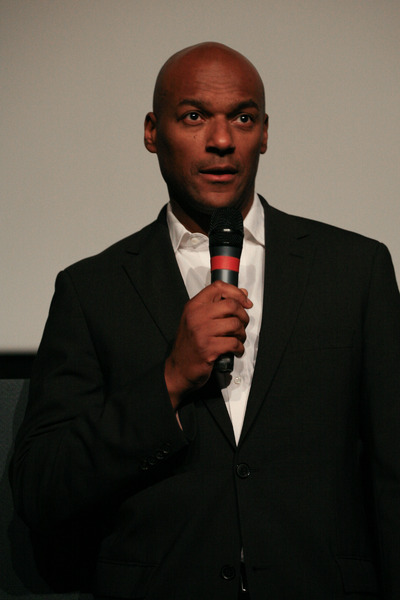 Colin Salmon (born 6 December 1962) is a British actor best known for playing Charles Robinson in three James Bond films and James "One" Shade in the Resident Evil film series. He currently has a recurring role as Walter Steele in the CW series Arrow.

Salmon was born in Bethnal Green, London, England, the son of Sylvia Ivy Brudenell Salmon, a nurse. He grew up in Luton and attended Ramridge Primary School and Ashcroft High School.

On leaving school, Salmon became the drummer in the punk rock band the Friction which he formed along with three friends from Ashcroft High School. The band released a 7-inch EP, a live cassette, a cassette-EP and performed regularly around Luton in 1979 and 1980. Salmon also briefly worked with another band, the Tee Vees. He plays trumpet and has his own jazz quartet playing at venues such as the Dorchester Grill Room and at events such as the Cheltenham Jazz Festival.

He is best known for his role as Charles Robinson, a character in the James Bond films Tomorrow Never Dies, The World Is Not Enough and Die Another Day.

He made his feature debut in 1992 as Sgt. Robert Oswald in the British mini-series Prime Suspect 2, which gave him much acclaim among British and American audiences. Salmon also played Note Makoti in the No. 1 Ladies Detective Agency and David Tyrel in the Sky One UK television series Hex. He appears as himself in the sixth episode of the BBC Three comedy, Little Miss Jocelyn.

Salmon married Fiona Hawthorne in 1988 and the couple have four children: Sasha, Rudi, Eden and Ben.

Colin Salmon is a main cast in Prey for the Devil.

Prey for the Devil