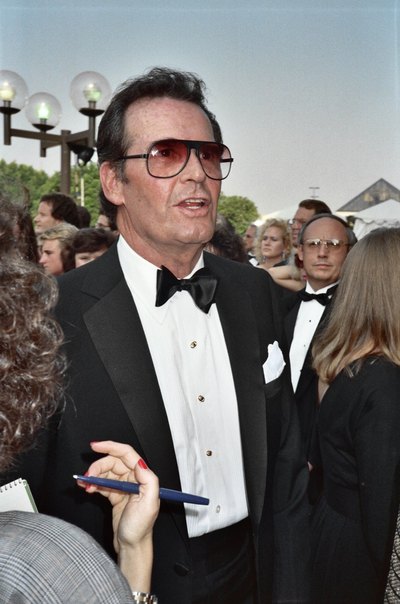 James Garner (born James Scott Bumgarner; April 7, 1928) is an American film and television actor, one of the first Hollywood actors to excel in both media. He has starred in several television series spanning a career of more than five decades. These included his roles as Bret Maverick, in the popular 1950s western-comedy series, Maverick; Jim Rockford, in the popular 1970s detective drama, The Rockford Files; and the father of Katey Sagal's character on 8 Simple Rules following the death of John Ritter. He has starred in more than fifty movies, including The Great Escape (1963), Paddy Chayefsky's The Americanization of Emily (1964), Blake Edwards' Victor Victoria (1982), Murphy's Romance (1985), for which he received an Academy Award nomination, and The Notebook (2004).

Garner, the youngest of three children, was born in Norman, Oklahoma, the son of Mildred Scott (née Meek) and Weldon Warren Bumgarner, a carpet layer. His two older brothers were actor Jack Garner (1926–2011) and Charles Bumgarner, a school administrator who died in 1984. His family was Methodist. His mother, who was of part Cherokee descent, died when he was five years old. After their mother's death, Garner and his brothers were sent to live with relatives. Garner was reunited with his family in 1934, when Weldon remarried.

Garner grew to hate his stepmother, Wilma, who beat all three boys, especially young James. When he was fourteen, Garner finally had enough of his "wicked stepmother" and after a particularly heated battle, she left for good. James' brother Jack commented, "She was a damn no-good woman". Garner stated that his stepmother punished him by forcing him to wear a dress in public and that he finally engaged in a physical fight with her, knocking her down and choking her to keep her from killing him in retaliation. This incident ended the marriage.

Shortly after the breakup of the marriage, Weldon Bumgarner moved to Los Angeles, while Garner and his brothers remained in Norman. After working at several jobs he disliked, at sixteen Garner joined the United States Merchant Marine near the end ofWorld War II. He fared well in the work and with shipmates, but suffered from chronicseasickness. At seventeen, he joined his father in Los Angeles and enrolled at Hollywood High School, where he was voted the most popular student. A high school gym teacher recommended him for a job modeling Jantzen bathing suits. It paid well,$25 an hour, but in his first interview for the Archives of American Television, he said he hated modeling and soon quit and returned to Norman. There, he played football and basketball, as well as competed on the track and golf teams, for Norman High School. He never graduated from high school, explaining in a 1976 Good Housekeeping magazine interview: "I was a terrible student and I never actually graduated from high school, but I got my diploma in the Army."

Later, he joined the National Guard serving seven months in the United States. He then went to Korea for 14 months in the Regular Army, serving in the 5th Regimental Combat Team in the Korean War. He was wounded twice, first in the face and hand from shrapnelfire from a mortar round, and second on April 23, 1951 in the buttocks from friendly fire from U.S. fighter jets as he dived headfirst into a foxhole. Garner was awarded the Purple Heart in Korea for the first injury. For the second wound, he received a second Purple Heart (eligibility requirement: "As the result of friendly fire while actively engaging the enemy"), although Garner received the medal in 1983, 32 years after his injury. Garner was a self-described "scrounger" for his company in Korea, a role he later played in The Great Escape and The Americanization of Emily.

In 1954 a friend, Paul Gregory, whom Garner had met while attending Hollywood High School, persuaded Garner to take a non-speaking role in the Broadway production of The Caine Mutiny Court Martial, where he was able to study actor Henry Fonda night after night. Garner subsequently moved to television commercials and eventually to television roles. His first movie appearances were in The Girl He Left Behind and Toward the Unknown in 1956.

He changed his last name from Bumgarner to Garner after the studio had credited him as "James Garner" without permission. He then legally changed it upon the birth of his first child, when he decided she had too many names. His brother Jack also had an acting career and changed his surname to Garner, too. His non-actor brother, Charlie, kept the Bumgarner surname.

After several feature film roles, including Sayonara with Marlon Brando, Garner got his big break playing the role of professional gambler Bret Maverick in the comedy Western series Maverick from 1957 to 1960. Garner was earlier considered for the lead role in another Warner Brothers Western series, Cheyenne, but that role went to Clint Walker because the casting director couldn't reach Garner in time (according to Garner's autobiography), and Garner wound up playing an Army officer in the pilot instead.

Only Garner and series creator Roy Huggins thought Maverick could compete with The Ed Sullivan Show and The Steve Allen Show. The show almost immediately made Garner a household name. Various actors had recurring roles as Maverick foils, including Efrem Zimbalist, Jr as "Dandy Jim Buckley," Richard Long as "Gentleman Jack Darby," Leo Gordon as "Big Mike McComb," and Diane Brewster as "Samantha Crawford" (Huggins' mother's maiden name) while the series veered effortlessly from comedy to adventure and back again. The relationship with Huggins, the creator and original producer of Maverick, would later pay dividends for Garner.

Garner is married to Lois Clarke, whom he met at an "Adlai Stevenson for President" rally in 1956. They married 14 days later on August 17, 1956. "We went to dinner every night for 14 nights. I was just absolutely nuts about her. I spent $77 on our honeymoon, and it about broke me." According to Garner, "Marriage is like the Army; everyone complains, but you'd be surprised at the large number of people who re-enlist".

When Garner and Clarke married, her daughter Kim from a previous marriage was seven years old and recovering from polio. Garner has one daughter with wife Lois: Greta "Gigi" Garner. In an interview in Good Housekeeping with Garner, his wife, and two daughters conducted at their home that was published in March 1976, Gigi's age was given as 18 and Kim, 27.