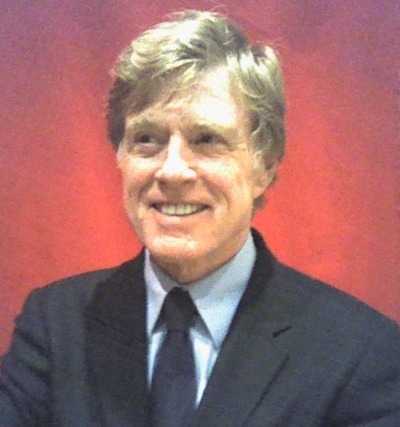 Charles Robert Redford, Jr. (born August 18, 1936), commonly known as Robert Redford, is an American actor, film director, producer, businessman, environmentalist, philanthropist, and founder of the Sundance Film Festival. He has received two Oscars: one in 1981 for directing Ordinary People, and one for Lifetime Achievement in 2002. In 2010, he was awarded French Knighthood in the Legion d'Honneur.

Redford was born in Santa Monica, California. His mother, Martha W. (née Hart), was born in Texas, to Archibald Hart and Sallie Pate Green; and his father, Charles Robert Redford, Sr. (November 19, 1914 – April 2, 1991), was a milkman-turned-accountant from Pawcatuck, New London County, Connecticut, son of Charles Elijah Redford and Lena Taylor. He has a stepbrother, William, from his father's re-marriage. Redford is of English, Irish, Scottish, and Scots-Irish ancestry (his surname originates in England).

Redford's family moved to Van Nuys, California, while his father worked in El Segundo. He attended Van Nuys High School, where he was classmates with baseball player Don Drysdale. He has described himself as having been a "bad" student, finding inspiration outside the classroom, and being interested in art and sports. He hit tennis balls with Pancho Gonzales at the Los Angeles Tennis Club to warm him up. After high school, he attended the University of Colorado for a year and a half, where he was a member of the Kappa Sigma Fraternity. While there, he worked at the restaurant/bar The Sink; a painting of his likeness is prominent in the bar's murals. After being asked to leave the University of Colorado, he traveled in Europe, living in France, Spain, and Italy. He later studied painting at the Pratt Institute in Brooklyn and took classes at the American Academy of Dramatic Arts in New York City.

Redford's career — like that of almost all major stars who emerged in the 1950s — began in New York, where an actor could find work both in television and on stage. Starting in 1959, he appeared as a guest star on numerous programs, including The Untouchables, The Americans, Whispering Smith, Perry Mason, Alfred Hitchcock Presents, Route 66, Dr. Kildare, Playhouse 90, Tate, The Twilight Zone, and "Captain Brassbound's Conversion" with a young Christopher Plummer, among others.

In 1960, Redford was cast as Danny Tilford, a mentally disturbed young man trapped in the wreckage of his family garage, in "Breakdown", one of the last episodes of the syndicated adventure series, Rescue 8, starring Jim Davis and Lang Jeffries.

Redford earned an Emmy nomination as Best Supporting Actor for his performance in The Voice of Charlie Pont (ABC, 1962). One of his last television appearances was on October 7, 1963, on Breaking Point, an ABC medical drama about psychiatry.

While still largely an unknown, Redford made his screen debut in War Hunt (1962), co-starring with John Saxon in a film set during the last days of the Korean War. This film also marked the debuts of director Sydney Pollack, with whom Redford would often collaborate in the near future, and actor Tom Skerritt. After his Broadway success, he was cast in larger feature roles in movies. He was cast alongside screen legend Alec Guinness in the war comedy Situation Hopeless ... But Not Serious, in which he played a soldier who has to spend years of his life hiding behind enemy lines. In Inside Daisy Clover (1965), which won him a Golden Globe for best new star, he played a bisexual movie star who marries starlet Natalie Wood, and rejoined her along with Charles Bronson for Pollack's This Property Is Condemned (1966) — again as her lover, though this time in a film which achieved even greater success. The same year saw his first teaming with Jane Fonda, in Arthur Penn's The Chase. This film marked the only time Redford would star with Marlon Brando. Fonda and Redford were paired again in the popular big screen version of Barefoot in the Park (1967) and were again co-stars much later in Pollack's The Electric Horseman (1979).

After this initial success, Redford became concerned about his blond male stereotype image and turned down roles in Who's Afraid of Virginia Woolf? and The Graduate. Redford found the property he was looking for in George Roy Hill's Butch Cassidy and the Sundance Kid (1969), scripted by William Goldman, in which he was paired for the first time with Paul Newman. The film was a huge success and made him a major bankable star, cementing his screen image as an intelligent, reliable, sometimes sardonic good guy.

On September 12, 1958, in Las Vegas, Nevada, Redford married Lola Van Wagenen, who dropped out of college to marry him. They had four children: Scott Anthony, David James "Jamie," Shauna, and Amy Redford.

His son, Jamie Redford, is a writer/producer.

Scott — their first child — was born September 1, 1959, and died of sudden infant death syndrome on November 17, 1959, at age 2½ months. His remains were buried at Provo City Cemetery in Provo, Utah. Lola and Redford divorced in 1985. He has five grandchildren: Dylan and Lena Redford (by son Jamie), Mica and Conor Schlosser (by daughter Shauna) and Eden August (by daughter Amy).

In July 2009, Redford married his longtime partner, Sibylle Szaggars, at the luxurious Louis C. Jacob Hotel in Hamburg, Germany, and in St. Severini church in Kirchwerder, in a rural part of Hamburg. She had moved in with Redford in the 1990s and shares his Sundance, Utah, home.

In May 2011, Alfred A Knopf published Robert Redford: The Biography by Michael Feeney Callan, written fifteen years with Redford's input, and drawn from his personal papers and diaries.