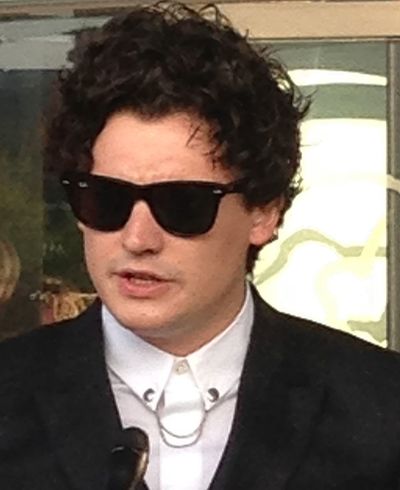 Aneurin Barnard ( /əˈnaɪərɪn/; born 8 May 1987) is a Welsh stage and screen actor. He is best known for his roles as Davey in Hunky Dory, Claude in The Truth About Emanuel, Robert "Bobby" Willis Jr. in Cilla and King Richard III in The White Queen.

Barnard was born in the former borough of Ogwr in Mid Glamorgan, Wales, the son of June, a factory worker, and Terry Barnard, a coal miner. He has a sister named Ceri. He attended Ysgol Gyfun Llanhari in Rhondda Cynon Taf during his secondary school years. He starred in HTV Wales series Jacob's Ladder as an 11-12-year-old. He then trained at the Royal Welsh College of Music & Drama alongside Kimberley Nixon and Tom Cullen, graduating in 2008. His first language is Welsh.

Barnard played Melchior, one of the three leads, in the London premiere of the Tony Award-winning musical Spring Awakening, which opened in February 2009 at the Lyric Hammersmith. The play later transferred to the Novello Theatre in March 2009, running until May 2009. Barnard won a Laurence Olivier Award for his role in Spring Awakening in 2010. He has appeared in guest roles in TV series Doctors, Casualty, Shameless, Y Pris and Jacob's Ladder. He has also appeared in the short TV films The Big Day, Night on the Tiles and the BAFTA Cymru winning Owl Creek Bridge.

Barnard's theatre work in Wales includes Singin’ in the Rain, playing Don Lockwood, for Bridgend County Youth Theatre and Il Miracolo for Elan Wales. At drama school, he appeared in productions of The Caucasian Chalk Circle, Hobson’s Choice, The Importance of Being Earnest and West Side Story, in which he played Tony. He was also involved in a radio production of Under Milk Wood.

Barnard appeared in Ironclad, a film set in 1215 and featuring the signing of the Magna Carta by King John and the rebellion by his barons. The film also stars Paul Giamatti, Derek Jacobi, Kate Mara, James Purefoy, Jason Flemyng and Mackenzie Crook.

In 2011 Barnard starred in Hunky Dory alongside Minnie Driver. The film is set in 1976 during the hottest summer recorded, in a school in Swansea. Barnard played the role of Davey and in the film sang songs from the era such as David Bowie's "Life on Mars" and The Who's "Love Reign O'er Me".

In January 2012 Barnard starred as photographer David Bailey in the television film "We'll Take Manhattan" alongside Karen Gillan. He also appeared in the 2012 horror movie Elfie Hopkins alongside Jaime Winstone. Barnard was considered for the role of Jack in the 2013 film Jack the Giant Slayer, but was beaten to the part by Nicholas Hoult.

In April–June 2012 Barnard filmed the fantasy adventure movie The Adventurer: The Curse of the Midas Box throughout the South West of England, playing the title role of Mariah Mundi and the movie was released in 2014. Barnard also featured in Trap for Cinderella (2013) directed by Iain Softley which was based on the book by Sébastien Japrisot as well as portraying the character Claude in Francesca Gregorini's drama thriller, The Truth About Emanuel.

Barnard portrayed King Richard III of England in the television series The White Queen on BBC One. He also appeared as John Trenchard in a two-part adaptation of Moonfleet that was filmed in Ireland and broadcast on Sky1 in December 2013.

In 2014, Barnard planned his role of Charles Knight in the upcoming science-fiction film Grotesque alongside Nicholas Hoult, Alex Reid, Ivan Dorschner and Allen Leech. He will also appear in the film The Devil's Harvest. He also played the part of Liverpool Music Manager Bobby Willis alongside Sheridan Smith in ITV's 3-part drama Cilla focusing on the early life of Cilla Black and her rise to fame.

In 2016 Barnard starred as Prince Boris Drubetskoy in Andrew Davies's television adaptation of Leo Tolstoy's War and Peace, broadcast on BBC One, and as Tim Hobson in the BBC 5-part drama Thirteen.