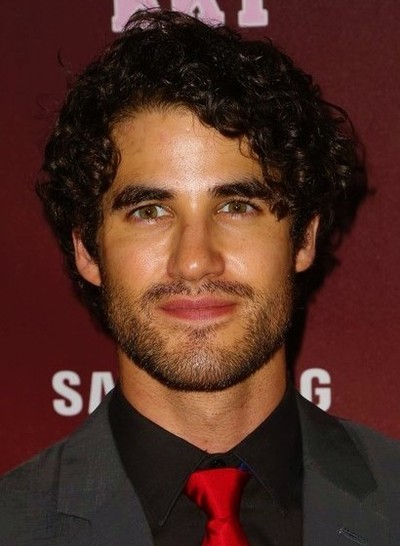 Darren Everett Criss (born February 5, 1987) is an American actor, singer and songwriter. He received Emmy and Golden Globe acting awards for his leading role in The Assassination of Gianni Versace: American Crime Story (2018). He has also appeared on Broadway and in film, and has released several recordings as a soloist and in a band.

A founding member and co-owner of StarKid Productions, a musical theater company based in Chicago, Criss first garnered attention playing the lead role of Harry Potter in, and writing most of the music and lyrics for, StarKid's musical production of A Very Potter Musical. The theater troupe made Billboard history when their original album, Me and My Dick, became the first charting student-produced musical recording, debuting at number eleven on the Top Cast Albums chart in 2010. Criss has also starred on Broadway in How to Succeed in Business Without Really Trying and Hedwig and the Angry Inch. In 2015, Criss co-founded Elsie Fest which is touted as "New York City's first outdoor music festival celebrating tunes from the stage and screen".

Criss is best known for his portrayal of Blaine Anderson on the Fox musical comedy-drama series Glee from 2010 until 2015. Initially appearing as the lead vocalist of Glee's Dalton Academy Warblers, Criss' first number, a cover version of "Teenage Dream", became the fastest-selling Glee single, reached number eight on the Billboard Hot 100, and was certified gold in the US. The Warblers have sold over 1.3 million tracks, and the soundtrack album, Glee: The Music Presents the Warblers (2011), peaked at number two on the US Billboard 200. He was nominated for an Emmy Award in 2015 for writing the song "This Time" for the Glee finale.

In addition to his music endeavors, Criss starred in the second installment of Ryan Murphy's American Crime Story. Subtitled The Assassination of Gianni Versace (2018), Criss's portrayal of spree killer Andrew Cunanan received acclaim from critics, and earned him an Emmy win for Outstanding Lead Actor in a Limited Series or Movie and a Golden Globe Award for Best Actor – Miniseries, or Television Film.

Criss was born in San Francisco, California, the youngest child of Cerina and Charles William Criss, an investment banker and a patron of the arts. He has an older brother, Charles "Chuck" Criss, who is a member of the band Freelance Whales. Criss is Eurasian – his mother is a native of Cebu, Philippines, while his father, a native of Pittsburgh, Pennsylvania, is of English, German, and Irish descent. Criss was raised primarily in San Francisco, apart from 1988–92, when the family resided in Honolulu, Hawaii, where his father, Charles started EastWest Bank, serving as chairman and CEO.

Criss attended Roman Catholic schools. He completed his elementary education at Stuart Hall for Boys, and later graduated from Saint Ignatius College Preparatory in 2005. In 2009, Criss obtained his Bachelor of Fine Arts from the University of Michigan, majoring in Theater Performance and minoring in Musicology and Italian.

Criss' interest in music started in early childhood; at age five, he began taking violin lessons and was classically trained for the next fifteen years. Criss taught himself how to play other instruments, including guitar, piano, mandolin, harmonica, and drums. In high school, Criss immersed himself in music – he held the position of concertmaster in the school orchestra, he fronted his own band, and was voted "most likely to win a Grammy" by his peers. When he was fifteen, Criss began learning music composition and wrote his first song, which he later used as the title track of his first EP Human, released in 2009.

Criss also showed an interest for the performing arts. At age ten, he was accepted into the American Conservatory Theater (Young Conservatory program) where he studied theater performance throughout his formative years. At St Ignatius, he was a member of the performing arts program and acted in work, including, The Music Man, The Diary of Anne Frank, and Fiddler on the Roof. He was active as both an actor and director in the University of Michigan's student-run theater organization Basement Arts. In 2008, he spent a semester abroad studying Italian theater at the Accademia dell'Arte in Arezzo, Italy.

Criss made his professional stage debut at the age of ten as Cesario in 42nd Street Moon's production of Fanny (1997), then played Mauro in the Richard Rodgers and Stephen Sondheim musical Do I Hear a Waltz? (1998), and Beauregard Calhoun in Babes in Arms (1999).

Throughout his adolescence, Criss appeared in a number of the American Conservatory Theater's plays, notably A Christmas Carol, A Midsummer Night's Dream, and The Voysey Inheritance. At the University of Michigan, he performed in stage productions such as Pride and Prejudice, A Few Good Men, and The Cripple of Inishmaan.

In January 2012, Criss made his Broadway debut, replacing Daniel Radcliffe in the role of J. Pierrepont Finch in the revival of How to Succeed in Business Without Really Trying for a three-week engagement at the Al Hirschfeld Theatre. His stint there proved to be a success: apart from Daniel Radcliffe's final week, the musical had the three most lucrative weeks of its 11-month run with Criss in the lead role, grossing more than four million dollars.

Criss started his television career with a five-episode arc playing the character of Josh Burton on Eastwick in 2009. The following year, he appeared in an episode of the series Cold Case.

Criss portrayed Blaine Anderson, on the Fox television series Glee. He made his first appearance in season two in the episode "Never Been Kissed", which aired on November 9, 2010.

Blaine attended Dalton Academy and was lead singer of its glee club, The Dalton Academy Warblers. Blaine initially served as a friend and mentor for Kurt, the bullied gay member of the Warblers' rival glee club, New Directions. Chemistry between the two characters, combined with fan support for the potential couple, led series co-creator Ryan Murphy to pair them romantically onscreen. At the beginning of the third season, Blaine transfers to McKinley High and joins New Directions; concurrently, Criss was promoted from recurring guest star to the show's main cast.

In the subsequent seasons, Blaine goes off to college and later returns to Dalton to become the vocal director of the Warblers. In the final season, he marries his long-time love, Kurt. Discussing public response to his character, Criss stated that he particularly enjoyed comments from "people from parts of the world who are maybe not as exposed to certain ideologies", but had reconsidered their stance on relationships and human rights as a result of the Blaine and Kurt storyline. He called this response "phenomenal" and said, "I was a straight kid growing up in a very gay community and it's something that I've had to watch so many friends have to struggle with and have no place to go to identify in kind of a grander media culture. To be a small piece of that machine is incredibly wonderful."

He was nominated for an Emmy Award for writing the song "This Time" one in a handful of the show's original songs over its six-season run, for the Glee finale, "Dreams Come True".

In 2017, Criss reunited with Glee creator Ryan Murphy to portray serial killer Andrew Cunanan in the second season of Murphy's anthology series American Crime Story. His performance received acclaim from critics, and earned Criss a Primetime Emmy Award for Outstanding Lead Actor in a Limited Series or Movie. He also earned a Golden Globe Award for Best Performance by an Actor in a Limited Series or a Motion Picture Made for Television.

On July 10, 2019, it was announced that Criss would be an actor, executive producer, and writer for Royalties, a new show on the streaming service Quibi. Criss is working with previous collaborators Matt and Nick Lang of Team StarKid, who are to co-write the series as well as executive produce.

On September 7, 2012, Criss made his feature film debut in the comedy Girl Most Likely. It premiered at the Toronto International Film Festival (TIFF) and was released nationwide on July 19, 2013. Previously titled Imogene, the film starred Kristen Wiig, Annette Bening, and Matt Dillon. He will also star in the upcoming movie Midway.

In January 2018, Criss announced he was engaged to Mia Swier, his girlfriend of seven and a half years. They married on February 16, 2019.