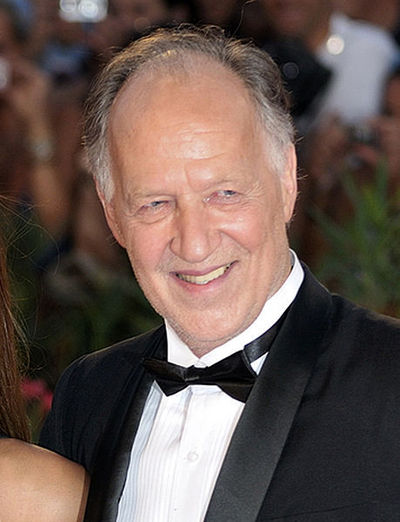 Herzog is considered one of the greatest figures of the New German Cinema, along with Rainer Werner Fassbinder, Margarethe von Trotta, Volker Schlöndorff, Werner Schröter, and Wim Wenders. Herzog's films often feature heroes with impossible dreams, people with unique talents in obscure fields, or individuals who are in conflict with nature. French filmmaker François Truffaut once called Herzog "the most important film director alive." American film critic Roger Ebert said that Herzog "has never created a single film that is compromised, shameful, made for pragmatic reasons or uninteresting. Even his failures are spectacular."

Herzog was born Werner Herzog Stipetić to a German father, Dietrich Herzog, and a Croatian mother, Elizabeth Stipetić, in Munich. His family moved to the remote Bavarian village of Sachrang (in the Chiemgau Alps), after the house next to theirs was destroyed during a bombing raid at the close of World War II. When Herzog was 12, he and his family moved back to Munich. His father had abandoned the family early in his youth. Werner later adopted his father's surname Herzog (German for "duke"), which he thought sounded more impressive for a filmmaker.

The same year, Herzog was told to sing in front of his class at school, and he adamantly refused. He was almost expelled. Until he was age eighteen, Herzog listened to no music, sang no songs, and studied no instruments. He later said that he would easily give ten years from his life to be able to play an instrument. At fourteen, he was inspired by an encyclopedia entry about filmmaking, which he says provided him with "everything I needed to get myself started" as a filmmaker—that, and the 35 mm camera he stole from the Munich Film School. In the commentary for Aguirre, the Wrath of God, he says, "I don't consider it theft—it was just a necessity—I had some sort of natural right for a camera, a tool to work with." He won a scholarship to Duquesne University in Pittsburgh, Pennsylvania, but chose to study at the more prestigious University of Munich. While in his teens, Herzog travelled to various exotic places.

In the early 1960s, Herzog worked nightshifts as a welder in a steel factory to help fund his first films. Before leaving school, he bought a house in the UK, in what was likely the Moss Side area of Manchester. There he learned to speak English. In 1966 he worked briefly in television under the auspices of NASA;

In 1971, while Herzog was location scouting for Aguirre, the Wrath of God in Peru, he narrowly avoided taking LANSA Flight 508. Herzog's reservation was canceled due to a last-minute change in itinerary. The plane was later struck by lightning and disintegrated, but one survivor lived after a free fall. Long haunted by the event, nearly 30 years later he made a documentary film Wings of Hope (2000) about it, which explored the story of the sole survivor Juliane Koepcke.

Besides using professional actors—German, American and otherwise—Herzog is known for using people from the locality in which he is shooting. Especially in his documentaries, he uses locals to benefit what he calls "ecstatic truth." He uses footage of the non-actors both playing roles and being themselves. Herzog and his films have been nominated for and won many awards.

His first major award was the Silver Bear Extraordinary Prize of the Jury for his first feature film Signs of Life (Nosferatu the Vampyre was also nominated for Golden Bear in 1979). Most notably, Herzog won the best director award for Fitzcarraldo at the 1982 Cannes Film Festival. In 1975, his movie The Enigma of Kaspar Hauser won The Special Jury Prize (also known as the 'Silver Palm') at the Cannes Festival. Other films directed by Herzog nominated for Golden Palm are: Woyzeck and Where the Green Ants Dream.

His films were nominated at many other important festivals around the world: César Awards (Aguirre, the Wrath of God), Emmy Awards (Little Dieter Needs to Fly), European Film Awards (My Best Fiend) and Venice Film Festival (Scream of Stone and The Wild Blue Yonder).

In 1987 Herzog and his half-brother Lucki Stipetić won the Bavarian Film Award for Best Producing for the film Cobra Verde. In 2002 he won the Dragon of Dragons Honorary Award during Kraków Film Festivalin Kraków.

Herzog has been married three times and has three children, one from an outside relationship. In 1967, he married Martje Grohmann, with whom he had a son Rudolph Amos Achmed, born in 1973. He has become a film producer and director, and has written several non-fiction books. In 1987, Herzog was divorced from Grohmann.

In 1980, Herzog had a daughter Hanna Mattes (now a photographer and an artist), born to his companion Eva Mattes.

After his divorce, in 1987 he married Christine Maria Ebenberger. Their son, Simon Herzog, was born in 1989. He attended Columbia University. Herzog and Ebenberger divorced in 1994.

In 1995, Herzog moved to the United States. In 1999 he married photographer Lena Pisetski, now Lena Herzog. They live in Los Angeles.