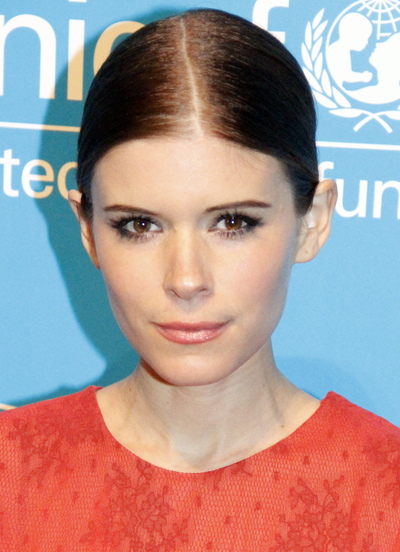 Kate Rooney Mara (born February 27, 1983) is an American actress. She starred in House of Cards as Zoe Barnes and appeared in the TV series 24 as computer analyst Shari Rothenberg. She made her film debut in 1999 with Random Hearts. She appeared in Brokeback Mountain (2005), We Are Marshall (2006), Shooter (2007), Transsiberian (2008), Stone of Destiny (2008), The Open Road (2009) and Transcendence (2014). She also appeared in the horror mini-series American Horror Story: Murder House as Hayden McClaine.

She has been cast as Sue Storm / The Invisible Woman in the upcoming Fantastic Four (2015).

Kate Rooney Mara was born and raised in Bedford, New York, to Timothy Christopher Mara, a scout and the vice president of player evaluation for the New York Giants, and Kathleen McNulty Mara (née Rooney). She is the second of four siblings, with one older brother, Daniel, one younger sister, Rooney (who is also an actress), and one younger brother, Conor.

Mara's father has Irish, German, and French Canadian ancestry, and her mother is of Irish and Italian descent. Her paternal grandparents are Wellington Mara and Ann Mara. Wellington, a long-time co-owner of the Giants football team, was succeeded by her uncle, John Mara. Her maternal grandfather, Timothy James "Tim" Rooney, has run Yonkers Raceway in Yonkers, New York since 1972. She is a great-granddaughter of both New York Giants founder Tim Mara and Pittsburgh Steelers founder Art Rooney, Sr. Her granduncle, Dan Rooney, chairman of the Steelers, was a former United States Ambassador to Ireland and the co-founder of The Ireland Funds charitable organization. An uncle, Art Rooney II, is the current President and co-owner of the Steelers.

Mara began acting at the age of nine in a school musical. She attended several youth theater-arts schools and appeared in community theater and in school plays. Mara described herself to Esquire magazine as having been "painfully shy" while growing up and said she only had one friend.

Her first audition was for the television drama Homicide: Life on the Street. She did not get the role but knew from then on that she just wanted to act. Mara graduated from Fox Lane High School a year early and was accepted into the Tisch School of the Arts at New York University to study musical theater, but she eventually deferred her slot to work as an actress.

Her first television role was in the drama Law & Order in 1997. She went on to guest star on numerous television series, including Madigan Men, Ed and Law & Order: Special Victims Unit. Mara landed two recurring roles in 2003, as Kate on Everwood, an 18-year-old who is impregnated by her piano teacher and then gets an abortion and as Vanessa on Nip/Tuck, a bisexual cheerleader involved in a love triangle with her boyfriend Matt McNamara (John Hensley) and another cheerleader (Sophia Bush). Mara also appeared on Cold Case, Boston Public, CSI: Miami and CSI: Crime Scene Investigation that same year.

Mara's film debut was in Random Hearts, with Harrison Ford in 1999, directed by Sydney Pollack. She played Jessica Chandler, the daughter of a congresswoman (Kristin Scott Thomas). She next appeared in the Sundance Film Festival award-winning films Joe the King (1999) and Tadpole (2002), alongside Sigourney Weaver. Mara co-starred in Peoples (2004), a drama and coming of age story filmed in Louisville, Kentucky. She starred in the direct-to-video horror film Urban Legends: Bloody Mary and appeared with Noah Wyle and Illeana Douglas in The Californians in 2005. Her supporting role as the daughter of Heath Ledger's character in the Academy Award-winning Brokeback Mountain that year which brought her more widespread critical notice.

Mara has stated she comes from a "huge" family. Her father is one of 11 children. She has 22 aunts and uncles and 40 cousins.

Mara formerly dated actor Max Minghella from 2010 to 2014. Mara credits her vegan diet and regular workouts for keeping herself fit.