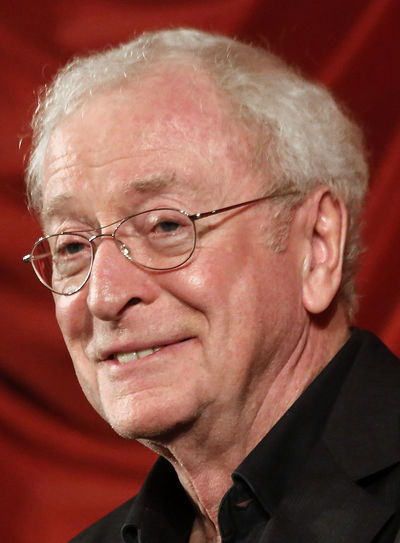 Sir Michael Caine, CBE (born Maurice Joseph Micklewhite; 14 March 1933), is an English actor and author. Renowned for his distinctive working class cockney accent, Caine has appeared in over 115 films and is regarded as a British film icon.

He made his breakthrough in the 1960s with starring roles in a number of acclaimed British films, including Zulu (1964), The Ipcress File (1965), Alfie (1966), for which he was nominated for an Academy Award, The Italian Job (1969), and Battle of Britain (1969). His most notable roles in the 1970s included Get Carter (1971), The Last Valley, Sleuth (1972), for which he earned his second Academy Award nomination, The Man Who Would Be King (1975), and A Bridge Too Far (1977). He achieved some of his greatest critical success in the 1980s, with Educating Rita (1983) earning him the BAFTA and Golden Globe Award for Best Actor. In 1986, he received an Academy Award for Best Supporting Actor for his performance in Woody Allen's Hannah and Her Sisters.

Caine played Ebenezer Scrooge in The Muppet Christmas Carol (1992). Having by that time practically retired from acting on the big screen, he enjoyed a career resurgence in the late 1990s, receiving his second Golden Globe Award for his performance in Little Voice in 1998 and receiving his second Academy Award for Best Supporting Actor for The Cider House Rules the following year. Caine played Nigel Powers in the 2002 parody Austin Powers in Goldmember, and Alfred Pennyworth in Christopher Nolan's The Dark Knight Trilogy. He appeared in several other of Nolan's films including The Prestige (2006), Inception (2010), and Interstellar (2014). He also appeared as a supporting character in Alfonso Cuarón's Children of Men and Pixar's 2011 film Cars 2. As of 2015, films in which he has starred have grossed over $7.4 billion worldwide. Caine is ranked the ninth highest grossing box office star.

Caine is one of only two actors nominated for an Academy Award for acting in every decade from the 1960s to 2000s (the other one being Jack Nicholson; Laurence Olivier was also nominated for an acting Academy Award in five different decades, beginning in 1939 and ending in 1978). In 2000, Caine was knighted by Queen Elizabeth II in recognition of his contribution to cinema.

Caine was born in St Olave's Hospital, Rotherhithe,Bermondsey, London, the son of Ellen Frances Marie (née Burchell; 1900–1989), a cook and charwoman, and Maurice Joseph Micklewhite (d. 1957), a fish market porter. His father was of English, Irish, and, reportedly, Irish Traveller, ancestry. He was brought up in his mother's Protestant religion (his father was Catholic).

Caine had a maternal half-brother, David William Burchell (1925–March 1992) and a full brother, Stanley Micklewhite (1936–2013). Caine grew up in Southwark, South London, and during the Second World War, he was evacuated to North Runcton near King's Lynn in Norfolk. After the war, his father was demobilised, and the family were rehoused by the council in Marshall Gardens at the Elephant and Castle in a pre-fabricated house made in Canada, as much of London's housing stock had been damaged during the Blitz in 1940–41.

In 1944, he passed his eleven plus exam, winning a scholarship to Hackney Downs Grocers' School. After a year there he moved to Wilson's Grammar School in Camberwell (now Wilson's School in Wallington, South London), which he left at sixteen after gaining a School Certificate in six subjects. He then worked briefly as a filing clerk and messenger for a film company in Victoria Street and film producer Jay Lewis in Wardour Street. From 1952, when he was called up to do his national service until 1954, he served in the British Army's Royal Fusiliers, first at the BAOR HQ in Iserlohn, Germany and then on active service during the Korean War. Caine has said he would like to see the return of national service to help combat youth violence, stating: "I'm just saying, put them in the Army for six months. You're there to learn how to defend your country. You belong to the country. Then when you come out, you have a sense of belonging rather than a sense of violence". He has also said that when he was a soldier in Korea he got into a situation where he knew he was going to die and the memory of that experience lasted with him and formed his character for the rest of his life: “The rest of my life I have lived every bloody moment from the moment I wake up until the time I go to sleep.”

Caine's acting career began at the age of 20 in Horsham, Sussex when he responded to an advertisement in The Stage for an assistant stage manager who would also perform small walk-on parts for the Horsham-based Westminster Repertory Company who were performing at the Carfax Electric Theatre. Adopting the stage name "Michael Scott", in July 1953 he was cast as the drunkard Hindley in the Company's production of Wuthering Heights. He moved to the Lowestoft Repertory Company in Suffolk for a year when he was 22. It was here that he met his first wife. He has described the first nine years of his career as "really, really brutal."

When his career took him to London in 1954 after his provincial apprenticeship, his agent informed him that there was already a Michael Scott performing as an actor in London and that he had to come up with a new name immediately. Speaking to his agent from a telephone box in Leicester Square, London, he looked around for inspiration, noted that The Caine Mutiny was being shown at the Odeon Cinema in 1954, and decided to change his name to "Michael Caine". He joked on television in 1987 that, had a tree partly blocking his view been a few feet to the left, he might have been called "Michael Mutiny". (Humphrey Bogart was his "screen idol" and he would later play the part originally intended for Bogart in John Huston's The Man Who Would Be King.) He also later joked in interviews that had he looked the other way, he would have ended up as "Michael One Hundred and One Dalmatians". (This quip is obviously tongue-in-cheek as the film One Hundred and One Dalmatians was not made until seven years later in 1961). In 1959, he was Peter O'Toole's understudy in Lindsay Anderson's West End staging of Willis Hall's The Long and the Short and the Tall. He took over the role when O'Toole left to make Lawrence of Arabia and went on to a four-month tour of Britain and Ireland.

Michael Caine's first film role was as one of the privates in George Baker's platoon in the 1956 film A Hill in Korea. The stars of the film were George Baker, Stanley Baker, Harry Andrews and Michael Medwin, with Stephen Boyd and Ronald Lewis, and Robert Shaw also had a small part.

A big break came for Caine when he was cast as Meff in James Saunders' Cockney comedy Next Time I'll Sing To You, when this play was presented at the New Arts Theatre in London on 23 January 1963. Scenes from the play's performance were featured in the April 1963 issue of Theatre World magazine.

When this play moved to the Criterion in Piccadilly with Michael Codron directing, he was visited backstage by Stanley Baker, one of the four stars in Caine's first film, A Hill in Korea, who told him about the part of a Cockney private in his upcoming film Zulu, a film Baker was producing and starring in. Baker told Caine to meet the director, Cy Endfield, who informed him that he already had given the part to James Booth, a fellow Cockney who was Caine's friend, because he looked more Cockney than Caine did. Endfield then told the 6'2" Caine that he did not look like a Cockney but like an officer, and offered him a screen test for the role of a snobbish, upper class officer after Caine assured him that he could do a posh accent. Caine believes Endfield offered him, a Cockney, the role of an aristocrat because, being American, he did not have the endemic British class-prejudice. Though he tested poorly, Endfield gave him the part that would make him a film star.

Caine lives in Leatherhead, Surrey, and is patron to the Leatherhead Drama Festival. He has also lived in North Stoke, Oxfordshire, Clewer near Windsor, Berkshire, Lowestoft in Suffolk and Chelsea Harbour in London. In addition, Caine owns an apartment at the Apogee in Miami Beach, Florida. He still keeps a small flat near where he grew up in south east London. Caine has published two volumes of memoirs, What's It All About? in 1992 and The Elephant to Hollywood in 2010.

He was married to actress Patricia Haines from 1955 to 1962. They have a daughter, Dominique (who was named after the heroine of the novel The Fountainhead by Ayn Rand). He dated Bianca Jagger in 1968. Caine has been married to actress and model Shakira Baksh since 8 January 1973. They met after Caine saw her appearing in a Maxwell House coffee commercial and a friend gave him her telephone number. They have a daughter, Natasha Haleema. As a Christian married to a Muslim, he says "no questions or issues ever come up" and describes his wife's beliefs as "very benign".

Proud of his working class roots, Caine has discussed the opportunities his film career gave him: "I got to play football with Pelé, for God’s sake. And I danced with Bob Fosse." He also became close friends with John Lennon, stating: "With John and I it was a case of bonding because we were both working class and we shared a sense of humour. We were pretending we weren’t who people thought we were." His closest friends today include two former James Bonds, Sean Connery and Roger Moore.