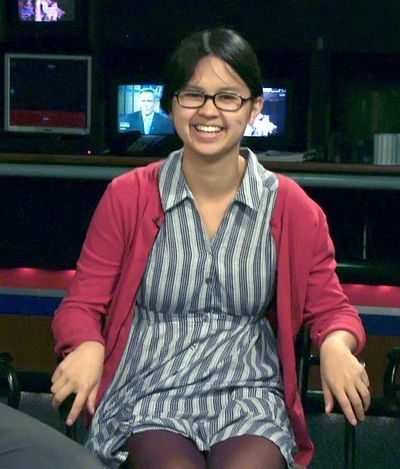 Her screenwriting debut, the feature film Paper Heart, won the Waldo Salt Screenwriting Award at the 2009 Sundance Film Festival. She is also known for her role as Dr. Chi Park on the Fox medical drama House and as the voice of Ruby (one half of Garnet's fusion) on the Cartoon Network animated series Steven Universe.

Yi was born in Los Angeles, California. Her mother, a native of the Philippines, is of Filipino and Spanish descent, and her father is of Mexican, Korean, Irish, German, French, and Native American ancestry. She attended the University of California, Riverside before leaving to pursue a full-time career in comedy. She had an early interest in performing when she attended Bloomington High School and was involved in theatre.

Yi began by performing in Bloomington, California. After high school, she has performed shows in Los Angeles at The Steve Allen Theater, and The Upright Citizens Brigade Theatre. In 2005 and 2006, she performed in the New York Comedy Festival, and in 2007 HBO's U.S. Comedy Arts Festival in Aspen, Colorado. Yi's film debut was in Judd Apatow's 2007 film, Knocked Up. In 2008, Yi performed as part of the Apatow for Destruction Live comedy show at Montreal's Just For Laughs Festival.

In the 2009 film Paper Heart, a "hybrid documentary" which Yi executive produced in addition to co-writing, she starred as a fictional version of herself, along with Michael Cera.

Yi and Paul Rust formed the band The Glass Beef. The duo share one electric guitar and both sing lead vocals. In 2006, they released their debut album, The Farewell Album, produced by John Spiker, bassist of Tenacious D.

Yi was featured in the video "Song Away" by Hockey. She is currently in the band Sacred Destinies.

From October 2011 to May 2012, Yi starred in Fox's series House as Dr. Chi Park, a young doctor with anger-management issues.