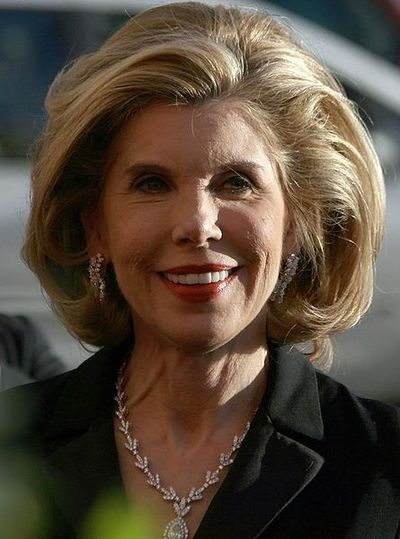 Christine Jane Baranski (born May 2, 1952) is an American stage and screen actress. She is an Emmy Award winner and a two-time Tony Award winner.

Baranski was born in Buffalo, New York, the daughter of Virginia (née Mazurowska) and Lucien Baranski, who edited a Polish-language newspaper. She is of Polish descent and her grandparents were actors in the Polish theater. Baranski attended high school at the Villa Maria Academy in Cheektowaga, a suburb of Buffalo. She then studied at New York City's Juilliard School (Drama Division Group 3: 1970–1974) where she graduated with a Bachelor of Arts degree in 1974.

Baranski made her Off-Broadway debut in Coming Attractions at Playwrights Horizons in 1980, and has appeared in several Off Broadway productions at the Manhattan Theatre Club, starting with Sally and Marsha in 1982.

Baranski made her Broadway debut in Hide & Seek in 1980. For her next Broadway performance, in Tom Stoppard's The Real Thing, she won the 1984 Tony Award Best Featured Actress in a Play. Other Broadway credits include: Hurlyburly, The House of Blue Leaves, Rumors (for which she won her second Tony), Regrets Only, Nick & Nora, and the Encores! concert staging of Follies.

Baranski has also starred in various roles in films and television. In film, some of her better known roles are as Katherine Archer in The Birdcage, Mary Sunshine in the musical Chicago, Martha May Whovier in How the Grinch Stole Christmas, Connie Chasseur in The Ref and as Tanya Chisham-Leigh in the hit musical Mamma Mia! She also played Cinderella's stepmother in the film adaptation of the musical, Into the Woods.

Though widely reported to have worked as a child actress under the name "Chris Charney," Baranski denies ever having appeared on The Brady Bunch, adamant that "the first real TV show" that she worked on was Cybill.

Baranski was featured as Cybill Shepherd's hard-drinking friend Maryanne Thorpe in the CBS sitcom Cybill, which ran from 1995 until 1998, during which time she hosted Saturday Night Live and won an Emmy Award as best supporting actress in a comedy series along with three other nominations. The next year, Baranski received an Emmy nomination for a guest starring role as an intimidating radio psychiatrist on an episode of the NBC series Frasier. She had an uncredited role in the series Now and Again as the voice of Roger's overbearing wife Ruth, who was never seen by viewers.