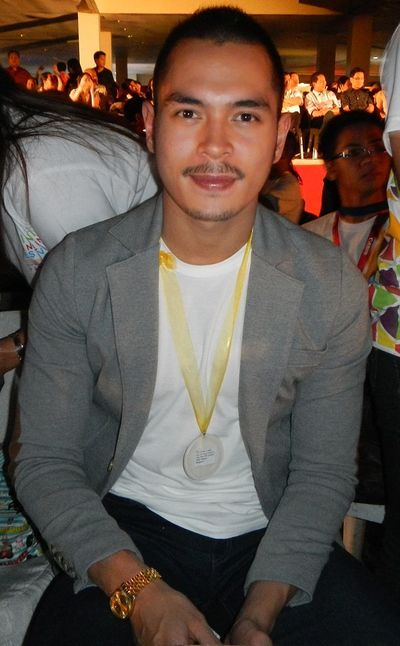 Juan Carlos Cuenca (born December 30, 1987) is an American-Filipino actor and model. He is of dual American and Filipino citizenship. Born in San Jose, California and was raised in Manila, Philippines. He also played for United Football League Division 2 sides Team Socceroo FC.

Juan Carlos Cuenca was born on December 30, 1987 in San Jose, California, United States. His father is an architect, Spanish descent and is from Valencia, Spain and his mother is a businesswoman, Filipino descent from Ilocos Norte. Cuenca's mother is Rachele Leveriza while his father's name is Juan Tomas Cuenca. He has two siblings, Rufo and Bea. He was also once a student of PAREF Southridge, a school for boys in Muntinlupa City.

At the age of nine, Cuenca was discovered by the talent scout Arvin Bentonon for Cosmo Modeling Agency. Soon after, he made several television and print commercials including endorsements for Safeguard, Coke and Globe Telecom. At age ten, he had a cameo role in the 1997 film version of Wansapanataym. It was followed by Takbo Barbara Takbo and Panday in 1998. All three films were under Star Cinema of ABS-CBN.

In 2003, he returned to show business under GMA Network and appeared in the youth-oriented drama series, Click, where he was picked to be on the cast in its Batch 2. When the show went defunct, Cuenca began portraying varied roles and was cast in Hanggang Kailan, Forever in My Heart and in the season 5 of Love to Love. In 2005, he starred as Kahlil in the hit fantasy series Encantadia. He also appeared in the ninth season of Love to Love titled "Miss Match". In 2006, he starred as one of the wizards in the fantasy-themed television series, Majika, which became his last TV series on GMA.

After transferring to ABS-CBN in 2006, he appeared in an episode of Love Spell, "Sweet Sixty".

In 2007, he became part of the cast of the network's soap opera Sana Maulit Muli, his first primetime drama series on the network. Also, he starred as his first leading role in Sineserye Presents: Natutulog Ba Ang Diyos?. He portrayed Andrew - a rich, spoiled and irresponsible teen guy who is secretly in love with the leading actress Roxanne Guinoo. Later, he was cast on the fantasy series Lastikman. He appeared in total 14 shows of ABS-CBN within 1 years (from late 2006 to 2007).

In 2008, he landed on the lead role in ABS-CBN's action series remake of Palos with Cesar Montano. Besides, he also played the main role of Kiko with Shaina Magdayao in Your song Presents: A million miles away. In the mini-series, he played Kiko -an assistant of Lizzie's father who asks him become a "babysitter" for Lizzie and her mean boyfriend, under the instruction of Lizzie's father. However, it is revealed that Kiko is secretly in love with her for a long time.

In 2009, he starred in Tayong Dalawa alongside, Kim Chiu where he gained recognition from audience and criticism. He portrayed David Dave Garcia Jr (Dave), a jack-a-danny and a soldier in the Philippine army. In the series, he had the triangle love story with Gerald Anderson and Kim Chiu.The TV hit was aired on TV in many countries in Asia such as: Singapore, Malaysia, Vietnam, Brunei, Cambodia... and in Africa... In the same year, he appeared on Precious Hearts Romances Presents: My Cheating Heart alongside kapamilya leading lady Cristine Reyes.

In 2010, he portrayed the role of Alejandro in the Filipino remake of Rubi with biggest stars Kapamilya leading ladies Angelica Panganiban and Shaina Magdayao. In this year, he also starred as Elias Paniki in the fourth story of the 'Agimat' series Elias Paniki alongside Sam Pinto, Xian Lim and the ensemble cast.

In 2011, he participated the main cast in the Filipino remake of Green Rose as Edward. It is a remake of the Korean drama of the same title. The film had also the appearance of top stars including: Jericho Rosales, Anne Curtis and Alessandra De Rossi. After that, he portrayed Darmo Adarna, the well-known superhero of Filipino cartoon in Wansapanataym:Darmo Adarna, opposite Yen Santos. Different from a super-powered boy with a giant bird in the comic, Darmo Adarna in the show grows up as an overweight loser who is magically transformed into a muscle-bound hero.

In 2012, he played the role of Paul Raymundo in Kung Ako'y Iiwan Mo alongside two female stars Shaina Magdayao and Bangs Garcia, The triangle love and OFW-Workers's story in the film attracted the interest of audience . The series reached top rating in 2012 although it was aired on afternoon. Also the same year he starred on the primetime series Kahit Puso'y Masugatan as Rafael - a young and charming photographer with a tragedy life. It is really the challenging role for him because of his inner struggles in the film.

In 2013, he portrayed the role of Luis Sancuevas in the Filipino remake of Maria Mercedes with leading lady Jessy Mendiola and Jason Abalos.

In 2014, he starred as the main antagonist by playing the role of Franco in the epic drama series Ikaw Lamang with an ensemble cast.

In 2015 -2016, he portrayed the role of Juan, one of the Samonte brothers in the romantic drama series Pasión de amor, a Philippine adaptation of Telemundo-produced Pasión de Gavilanes, one of the most famous TV series in the year with top rating.

In the field of movie, Jake played both mainstream films: In the name of love, Status: it's complicated, My neighbor's wife, Villa Estrella, Tuhog.... and featured indie films such as: H.I.V.: Si Heidi, Si Ivy at si V (2010) - a film about AIDS, Nuwebe (2013), a film about child sexual abuse which gained local and international awards, Lihis (2013), Mulat (2014).... Jake won his first best actor award at the International Film Festival Manhattan (IFFM) in New York in 2014 for his performance in Diane Ventura's Mulat (Awaken), the same movie that recently won for him his second best actor at the 2016 World Cinema Festival in Copacabana, Brazil. Before, in Philippines he was honored Best actor at 5th Inquirer Indie Bravo Awards in 2014 and at 7th Ani Ng Dangal Awards in 2015.