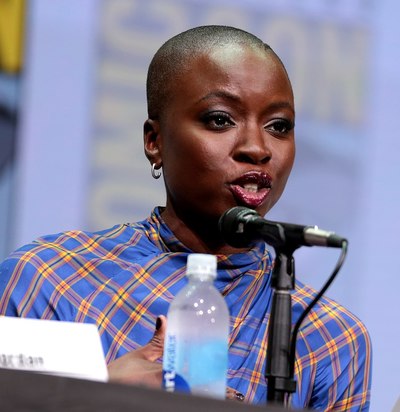 Danai Jekesai Gurira (born February 14, 1978) is an American actress and playwright of Zimbabwean ancestry, best known for her role as Michonne on The Walking Dead, an AMC television horror drama series, and as the writer of the Tony Award-winning play Eclipsed.

Gurira was born in Grinnell, Iowa, to Josephine Gurira, a university librarian, and Roger Gurira, a lecturer in the Department of Chemistry at the University of Wisconsin–Platteville. Her parents moved to the United States from Southern Rhodesia, which is now Zimbabwe, in 1964. She is the youngest of four siblings; Shingai and Choni are her sisters and Tare, her brother, is a chiropractor. Gurira lived in Grinnell until December 1983, when at age five she and her family moved back to Harare, the capital of Zimbabwe, after the country gained independence.

She attended high school at Dominican Convent High School. Afterwards, she returned to the United States to study at Macalester College, in Saint Paul, Minnesota, graduating with a Bachelor of Arts in psychology. Gurira also earned a Master of Fine Arts in acting, from New York University's Tisch School of the Arts.

Gurira said that she began writing plays in an effort to better utilize her strengths as an actor, and to tell stories that convey ideas about strong women with whom she identifies. As a playwright, she has been commissioned by Yale Repertory Theatre, Center Theatre Group, Playwrights Horizons, and the Royal Court.

She co-wrote and co-starred in the off-Broadway play In the Continuum, which won her an Obie Award, an Outer Critics Circle Award, and a Helen Hayes Award for Best Lead Actress. In December 2011, In the Continuum commemorated World AIDS Day 2011. The play, sponsored by the U.S. Embassy in Zimbabwe, was performed at Harare’s Theatre and featured the story of two women who were navigating the world after contracting the AIDS virus.

In 2009, Gurira made her acting debut on Broadway in August Wilson's play Joe Turner's Come and Gone playing Martha Pentecost. Gurira received the Whiting Award for an emerging playwright in 2012. In January 2015, Familiar, a play written by Gurira and directed by Rebecca Taichman, opened at Yale Repertory Theatre. It later premiered Off-Broadway in New York at Playwrights Horizons. The play is about family, cultural identity, and the experience of life as a first-generation American, and Gurira has said that it was inspired in part by family and friends of hers.

In 2015, Lupita Nyong'o starred in Gurira's 2009 play, Eclipsed, Off-Broadway at The Public Theater. It was announced the play would move to Broadway in 2016 at the John Golden Theatre. It was the first play to premiere on Broadway with an all female and black cast and creative team. The play is set in war-torn Liberia and focuses on three women who are living as sex slaves to a rebel commander, and is about how they deal with this difficult situation. The play was inspired by a photograph of female fighters and their tale of survival. It stars Saycon Sengbloh, Akosua Busia, Lupita Nyong'o, Zainab Jah and Pascale Armand and is directed by Liesl Tommy.

Gurira starred in the 2007 film The Visitor, for which she won Method Fest Independent Film Festival Award for Best Supporting Actress. She has appeared in the films Ghost Town, 3 Backyards, My Soul to Take, and Restless City, as well the television shows Law & Order: Criminal Intent, Life on Mars, and Law & Order. From 2010 to 2011, she appeared in the HBO drama series Treme.

In 2013, Gurira played a lead role in director Andrew Dosunmu's independent drama film Mother of George, which premiered at 2013 Sundance Film Festival. Gurira received critical acclaim for her performance as a Nigerian woman struggling to live in the United States. In June 2013, Gurira won the Jean-Claude Gahd Dam award at the 2013 Guys Choice Awards.

In January 2016, it was announced Gurira had been cast as Tupac Shakur's mother, Afeni Shakur, in All Eyez on Me, a biopic about the rap star.

At the San Diego Comic-Con in July 2016, it was announced that Gurira had been cast in Marvel's Black Panther film, playing the role of Okoye, the head of the Dora Milaje, the personal body guards of the Black Panther.

In March 2012, AMC announced on a live broadcast that Gurira would join the cast of their horror-drama series The Walking Dead, the highest rated series in cable television history, in its third season. Gurira plays Michonne, a relentless, katana-wielding character who joins a close-knit group in an apocalyptic world. Together they are forced to relentlessly fight flesh-eating zombies and certain of the few surviving humans, some of whom are even more diabolical and dangerous than the zombies themselves. Gurira had to learn how to ride horses for the show, which she enjoyed because it was a physical challenge.

Gurira currently lives in Los Angeles, and speaks four languages: French, Shona, basic Xhosa, and English. She has taught playwriting and acting in Liberia, Zimbabwe, and South Africa. She regularly spends time in New York City and maintains an active lifestyle to keep physically fit. Gurira is a Christian.