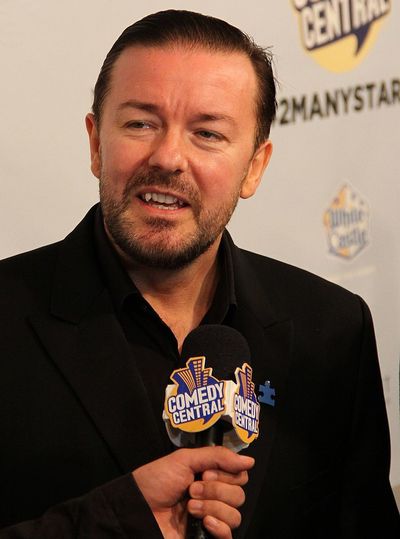 Gervais worked initially in the music industry, attempting a career as a pop star in the 1980s as the singer of the new wave act Seona Dancing and working as the manager of the then-unknown band Suede before turning to comedy. Gervais appeared on The 11 O'Clock Show on Channel 4 between 1998 and 2000. In 2000, he was given a Channel 4 talk show, Meet Ricky Gervais, and then achieved greater mainstream fame a year later with his BBC television series The Office. It was followed by Extras in 2005. He co-wrote and co-directed both series with Stephen Merchant. In addition to writing and directing the shows, he played the lead roles of David Brent in The Office and Andy Millman in Extras. He will reprise his role as Brent in the upcoming comedy film Life on the Road.

He has also starred in the Hollywood films Ghost Town, and Muppets Most Wanted, and wrote, directed and starred in The Invention of Lying and the Netflix released Special Correspondents. He has performed on four stand-up comedy tours and written the Flanimals book series. Gervais also starred with Merchant and Karl Pilkington in the podcast The Ricky Gervais Show, which has spawned various spin-offs starring Pilkington and produced by Gervais and Merchant. He hosted the Golden Globe Awards in 2010, 2011, 2012 and 2016.

Gervais has won seven BAFTA Awards, five British Comedy Awards, three Golden Globe Awards, two Emmy Awards and the 2006 Rose d'Or, as well as a Screen Actors Guild Award nomination. In 2007 he was voted the 11th greatest stand-up comic on Channel 4's 100 Greatest Stand-Ups and again in the updated 2010 list as the 3rd greatest stand-up comic. In 2010 he was named on the Time 100 list of the world's most influential people.

Gervais was born at Battle Hospital and raised in Whitley, Berkshire in England along with siblings Larry (born 1945), Marsha (born 1948), and Bob (born 1950). His father, Lawrence Raymond "Jerry" Gervais (1919–2002), a Franco-Ontarian from Pain Court, Ontario, Canada, emigrated while on foreign duty during the Second World War and worked as a labourer and hod carrier. He met Gervais's mother, Eva Sophia (née House; 1925–2000), who was English, during a blackout; they settled in Whitley. She died, aged 74, of lung cancer.

He attended Whitley Park Infants and Junior Schools, and received his secondary education at Ashmead Comprehensive School; after a spell as a gardener at the town's university, he moved on to University College London in 1980. He intended to study biology but changed to philosophy after two weeks, and earned an upper second-class honours degree in the subject. During his time at UCL, he met Jane Fallon, with whom he has been in a relationship since 1982. He is the former boss of Coldplay drummer Will Champion.

In 1983, during his final year as a student at UCL (University College London), Gervais and college friend Bill Macrae formed the new wave pop duo, Seona Dancing. They were signed by London Records, which released two of their singles—"More to Lose" and "Bitter Heart". The songs failed to chart inside the UK top 75. Despite not being successful in the UK, Seona Dancing did manage to score a hit in the Philippines with "More to Lose". He also worked as the manager for Suede before they became successful in the 1990s.

In 2013, Gervais performed a live tour as David Brent along with a band under the name "Foregone Conclusion". Gervais and the band performed songs written under the Brent character including songs such as "Equality Street" and "Free Love Freeway".

Gervais later worked as an assistant events manager for the University of London Union (ULU), then moved from ULU to a job as head of speech at the alternative radio station Xfm. Needing an assistant, Gervais interviewed the first person whose curriculum vitae he saw. It belonged to Stephen Merchant. In 1998 Gervais was made redundant when the station was taken over by the Capital Radio group. Around this time he was also a regular contributor to Mary Ann Hobbs' Radio 1 show, performing vox pop interviews in unlikely locations.

After the first series of The Office, Gervais and Merchant returned to Xfm in November 2001 for a Saturday radio show. This was when the pair first worked with Karl Pilkington, who produced the shows and later collaborated with them on their series of podcasts.

Gervais then came to much wider national attention with an obnoxious, cutting persona featured in a topical slot that replaced Ali G's segments on the satirical Channel 4 comedy programme The 11 O'Clock Show in early 1999, in which his character used as many expletives as was possible and produced an inordinate amount of politically incorrect statements. Among the other regular featured comedians on the show was Mackenzie Crook, later a co-star of The Office. Two years later, Gervais went on to present his own comedy chat show for Channel 4 called Meet Ricky Gervais; it was poorly received and has since been mocked by Gervais himself.

Throughout this time, Gervais also wrote for the BBC sketch show Bruiser and The Jim Tavare Show.

The Office started when Stephen Merchant, while on a BBC production course, had to make his own short film. In August 1999 he made a docu-soap parody, set in an office, with help from Ash Atalla, who was shown a 7-minute video called 'The Seedy Boss', thus David Brent was created, Merchant passed this tape on to the BBC's Head of Entertainment Paul Jackson at the Edinburgh Fringe, who then passed it on to Head of Comedy Jon Plowman, who eventually commissioned a full-pilot script from Merchant and Gervais.

The first six-episode series of The Office aired in the UK in July and August 2001 to little fanfare or attention. Word-of-mouth, repeats, and DVDs helped spread the word, building up momentum and anticipation for the second series, also comprising six episodes.

The Office brand has since been remade for audiences in Sweden, France, Germany, Quebec, Brazil and the United States. Gervais and Merchant are producers of the American version, and they also co-wrote the episode "The Convict" for the show's third season. Gervais has said that the episode "Training" is his favourite, where Brent plays his guitar and sings.

Gervais lives in Hampstead, having moved from Bloomsbury, with his partner of 33 years, producer and author Jane Fallon. He says they chose not to marry because "there's no point in us having an actual ceremony before the eyes of God because there is no God" or have children because they "didn't fancy dedicating 16 years of our lives. And there are too many children, of course". He has a cat named Ollie given to him by Jonathan Ross.

Gervais is a staunch supporter of gay rights and has praised the introduction of same sex marriage in England and Wales, calling it "a victory for all of us" and stated "anything that promotes equality, promotes progress." He added: "You can't take equality 'too far'."

Gervais is an atheist and a humanist, and states he abandoned Christianity at the age of eight. In December 2010 he wrote an editorial for The Wall Street Journal defending his atheism. He is a patron of the British Humanist Association, a British charity which promotes the humanist worldview and campaigns for a secular state and on human rights issues.

Gervais is a music fan and has stated that his hero is David Bowie, and his favourite song "Letter to Hermione". He has also stated that his first experience of a live music gig was watching Iggy Pop. In 2013, he wrote that Lou Reed was "One of the greatest artists of our time" following his death.