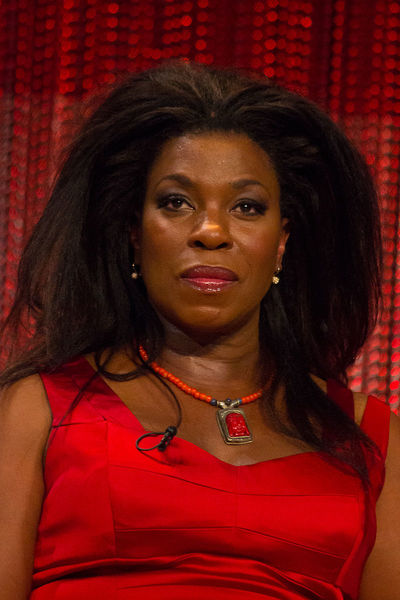 Lorraine Toussaint (born April 4, 1960) is a Trinidadian-American actress and producer.

Toussaint began her career in theatre before supporting performances in films such as Breaking In (1989), Hudson Hawk (1991), and Dangerous Minds (1995). As lead actress, she is best known for her role as Rene Jackson in the critically acclaimed Lifetime television drama series Any Day Now, from 1998 to 2002, and her recurring role as defense attorney Shambala Green in the NBC legal drama Law & Order. Toussaint later appeared as a regular cast member in the NBC police procedural Crossing Jordan (2002–03) and the TNT crime drama Saving Grace (2007–10). Toussaint has also made over 30 guest appearances on television, starred in a number of made-for-television movies, and had recurring roles in Ugly Betty, Friday Night Lights, Body of Proof, and The Fosters. She co-starred in the ABC fantasy-drama series Forever (2014–15), and recently co-starred in the Fox comedy-drama Rosewood.

Toussaint received critical acclaim and an Independent Spirit Award nomination for her performance in the 2012 drama film Middle of Nowhere, written and directed by Ava DuVernay. In 2014, she played the role of Yvonne "Vee" Parker, the main antagonist in the second season of the Netflix comedy-drama series Orange Is the New Black, for which she received critical acclaim and a Critics' Choice Television Award for Best Supporting Actress in a Drama Series. She later played the role of Amelia Boynton Robinson in the 2014 historical drama film Selma, directed by Ava DuVernay.

Toussaint was born in Trinidad and Tobago. In an interview she said: "I grew up under the British system, which I think is horrific for children -- very, very strict -- a system that did not recognize children as being individuals. You were small animals earning the right to be human. Childhood for me then felt extraordinarily powerless, and as an artistic child who learned in alternative ways, it was hell. I was beaten regularly... A good child was a fearful child, and I was a very, very, good little girl, which meant I lived in a world of silent, dark terror most of the time." Her mother was a teacher, and brought Toussaint to live in Brooklyn in the late 1960s.

Toussaint graduated from Manhattan's High School of Performing Arts in 1978. She then attended the Juilliard School's drama division as a member of Group 11 (1978–1982), where her classmates in 1982 included Megan Gallagher, Penny Johnson Jerald, Jack Kenny, and Jack Stehlin. Toussaint graduated from Juilliard with a Bachelor of Fine Arts degree. She then began her career as Shakespearean actress before tackling screen acting in television and film.

Toussaint made her screen debut in 1983. In 1986 she played the role of widow of a man shot and killed by Boston cops in the television film A Case of Deadly Force based on the book by Lawrence O'Donnell. She later had a recurring role of Vera Williams in the ABC daytime soap opera, One Life to Live, and alongside stage career appeared in guest starring roles in series like 227 and Law & Order (as recurring defense lawyer Shambala Green), and acted in a number of television films in the 1990s.

Toussaint has made her film debut in the female lead role opposite Burt Reynolds in the crime comedy Breaking In (1989). The film received positive reviews from critics, but flopped in box office. In 1991 she appeared opposite Bruce Willis in Hudson Hawk, and later co-starred alongside Michelle Pfeiffer in Dangerous Minds (1995). She also appeared in films Point of No Return (1993), Mother's Boys (1994), and Black Dog (1998). On television, Toussaint had regular roles in short-lived series Bodies of Evidence (CBS, 1992), Where I Live (ABC, 1993), Amazing Grace (NBC, 1995), and Leaving L.A. (ABC, 1997).

Toussaint had her biggest and leading role alongside Annie Potts in the Lifetime first original television drama series, Any Day Now. She starred in show as Rene Jackson, a successful African-American lawyer. The series has received critical acclaim for Toussaint's and Potts' acting performances and writing, but never had big ratings. In 2001, Toussaint was a promising contender for a Primetime Emmy Award for Outstanding Lead Actress in a Drama Series category, though she did not receive a nomination. She also was nominated five times for a NAACP Image Award for Outstanding Actress in a Drama Series for her role. Any Day Now ended after four-season and 88 episodes.

From 2002 to 2004, Toussaint had regular role of Dr. Elaine Duchamps in the NBC police procedural, Crossing Jordan. In later years she guest-starred on Frasier, Judging Amy, The Closer, CSI: Crime Scene Investigation, ER, and NCIS. She also was regular opposite Holly Hunter in the TNT crime drama Saving Grace as Capt. Kate Perry from 2007 to 2010. She also had a recurring roles of Amelia 'Yoga' Bluman in the ABC comedy series Ugly Betty in 2006, and as Bird Merriweather in the NBC drama Friday Night Lights (2009–11). Toussaint appeared as Jamie Foxx's character's mother in the 2009 drama The Soloist.

In 2012, Toussaint received critical acclaim and was nominated for an Independent Spirit Award for Best Supporting Female for her performance as a hardworking mother who struggles to support her daughter's (Emayatzy Corinealdi) decision to put her life on hold to support her incarcerated husband (Omari Hardwick), of Middle of Nowhere, a drama film written and directed by Ava DuVernay. Toussaint was a promising contender for an Academy Award for Best Supporting Actress category in 2013, but she did not receive a nomination. In 2012, she also guest-starred in Shonda Rhimes' dramas Grey's Anatomy as doctor, and on Scandal, as a bereaved and betrayed pastor's wife. In 2013, she had a recurring role in season 3 of Dana Delany's series Body of Proof as Angela Martin, the new police chief and main villain. Later in 2013, she joined the cast of ABC Family drama series, The Fosters, as Sherri Saum's character mother. In show she reunited on-screen with Annie Potts in first time as of Any Day Now finale in 2002.

Toussaint starred in the second season of Netflix's original comedy-drama series, Orange Is the New Black in 2014. She played the role of Yvonne "Vee" Parker, the main antagonist of season two, described as a street-tough inmate who returns to jail after a long stint as a drug dealer. Her performance earned massive critical acclaim. In the series Toussaint, in her 50s, appeared nude on-screen for the first time in her career. For her performance, she won Critics' Choice Television Award for Best Supporting Actress in a Drama Series and Screen Actors Guild Award for Outstanding Performance by an Ensemble in a Comedy Series.

In 2014, Toussaint co-starred in Ava DuVernay's historical drama film Selma, playing Amelia Boynton Robinson, a leading civil rights activist who had a key role in efforts that led to passage of the Voting Rights Act, and who was the first African-American woman in Alabama to run for Congress. That same year, she was cast in the ABC fantasy-drama series Forever opposite Ioan Gruffudd and Alana de la Garza. The series was canceled after a single season. Toussaint co-starred in the comedy film Xmas, directed and written by Jonathan Levine, which was released on November 25, 2015. In 2015, she co-starred in Runaway Island and Sophie and the Rising Sun. Later that year, Toussaint was cast in Coco, a drama produced by Lionsgate, alongside rapper Azealia Banks. In June 2015, she joined the cast of the Fox comedy-drama Rosewood in the series regular role of the titular character's mother. In February 2016, Vee was ranked 28th on Rolling Stone's list of "40 Greatest TV Villains of All Time".

In March 2016, Toussaint was cast in her role as defense attorney Shambala Green, a role she originated on Law & Order in 1990, on the NBC legal drama Chicago Justice, that aired a backdoor pilot in Chicago P.D..

On August 14, 2017, it was announced by Deadline that Toussaint will join as a series regular in the third season of Into the Badlands. She will star in the role of Cressida, a self-styled Prophetess. In 2017, she went to star in the NBC drama pilot The Village.

Toussaint has one daughter named Samara. One of Toussaint's grandparents was from Haiti, while the other was from Martinique. She had a blog at www.everydaylovelybylorraine.com.