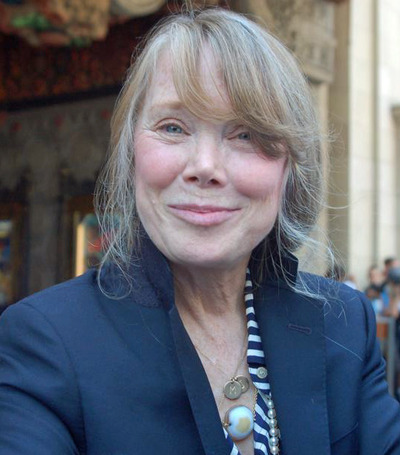 Sissy Spacek (born Mary Elizabeth Spacek; December 25, 1949) is an Academy Award-winning American actress and singer. She came to international prominence for her roles as Holly Sargis in Terrence Malick's 1973 film Badlands, and as Carrie White in Brian De Palma's 1976 horror film Carrie (based on the first novel by Stephen King) for which she earned her first Academy Award nomination. She won the Academy Award for Best Actress for her role as country star Loretta Lynn in the 1980 film Coal Miner's Daughter. She also received Oscar nominations for her roles in Missing (1982), The River (1984), Crimes of the Heart (1986) and In the Bedroom (2001).

Spacek was born on December 25, 1949, in Quitman, Texas. She is the daughter of Virginia Frances (née Spilman) and Edwin Arnold Spacek, Sr., a county agricultural agent. Spacek's father was of Czech (Moravian) and German ancestry; her paternal grandparents were Mary (Červenka) and Arnold A. Špaček (who served as Mayor of Granger, Texas in Williamson County). Her mother, of English and Irish descent, was from the Rio Grande Valley of Texas.

Spacek was greatly affected by the death of her eighteen-year old brother, Robbie, in 1967, which she has called "the defining event of my whole life." After she graduated from high school she moved to New York City, hoping to become a singer. There, she lived with her first cousin, actor Rip Torn, and his wife, actress Geraldine Page.

For a while, Spacek sang and played guitar in many of the Greenwich Village coffeehouses, eventually landing some paying work singing commercial jingles.

In late 1968, under the pseudonym of "Rainbo", Spacek recorded a novelty song titled '"John, You Went Too Far This Time"; the song proclaimed her disillusionment and shock over John Lennon, who on the cover of his newest album Two Virgins appeared in full-frontal nudity with his then-girlfriend Yoko Ono, shocking many fans. The single did not appear on the record charts and failed to sell well, so she was dropped by the record company.

While singing, Spacek also worked for a time as photographic model, and worked as an extra at Andy Warhol's Factory, appearing in a non-credited role in his 1970 film Trash. With the help of Rip Torn, she was enrolled in Lee Strasberg's Actors Studio and then the Lee Strasberg Institute in New York. Her first credited role was in the 1972 cult classic Prime Cut, in which she played Poppy, a girl sold into sexual slavery.

Spacek received international attention after starring in Terrence Malick's 1973 Badlands, in which she played Holly, the narrator of the film and 15-year old girlfriend of mass-murderer Kit (Martin Sheen). Spacek has described Badlands as the "most incredible" experience of her career. On the set of Badlands, Spacek met art director Jack Fisk, whom she married.

Spacek's iconic and career-defining role came in 1976 with Brian De Palma's Carrie, in which she played Carietta "Carrie" White, a shy, troubled high school senior with telekinetic powers. Spacek had to work hard to persuade director de Palma to engage her for the role. Rubbing Vaseline into her hair, and donning an old sailor dress her mother made for her as a child, Spacek turned up at the audition with the odds against her, but won the part. She was nominated for the Academy Award for Best Actress for her work in the film.