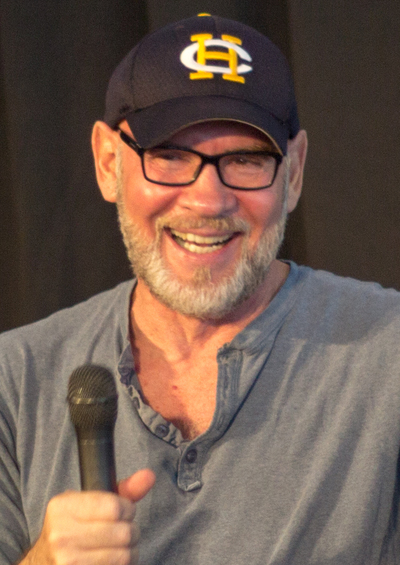 Mitchell Craig "Mitch" Pileggi (born April 5, 1952) is an American actor, best known for his role as Walter Skinner on The X-Files. He also had a recurring role on Stargate Atlantis as Colonel Steven Caldwell. He appeared in the 2008 film Flash of Genius. In 2008, he began a recurring role as Ernest Darby in Sons of Anarchy. He starred as Harris Ryland in the TNT revival of Dallas (2012–2014).

Pileggi, one of several children, was born in Portland, Oregon, the son of Maxine Anna (Minor), a homemaker, and Vito Pileggi, a defense contractor. His family moved frequently because of his father's occupation, and Pileggi lived in Oregon, California, and Texas before spending most of his adolescence in Turkey.

Pileggi was a high school athlete, concentrating on wrestling and football. He attended the University of Texas at Austin, receiving a degree in business. For a while he worked in Iran as a defense contractor, until the 1979 Iranian revolution caused him and his brother to have to flee the country, escaping to Greece.

Pileggi began acting while he was a high school student in Turkey, playing musical theater. After returning to Austin from Iran, he performed in local theaters, and continued his acting career with small roles in B-movies, and guest roles in television shows such as Dallas, China Beach, Code of Vengeance, and Walker, Texas Ranger.

In the 1980s, Pileggi starred in several films including Three O'Clock High as Duke "The Duker" Herman, an over zealous tough-as-nails high school parking lot security guard, and in Shocker as body-possessing serial killer Horace Pinker. Pileggi appeared playing the villain in the 1991 television film, Knight Rider 2000, a sequel movie to the original television series Knight Rider. Pileggi also appeared briefly in the 1992 film Basic Instinct as an investigating police officer in the interrogation scene of Michael Douglas.

His most notable role was as the FBI's Assistant Director Walter Skinner on The X-Files. The role was originally recurring, but the part expanded, and in 2001 he became a regular member of the cast. The character gradually became the most integral character besides the two leads. He remained with the show until its end in 2002. Pileggi played the character in the 1998 X-Files film and in the 2008 film The X-Files: I Want to Believe. He also reprised the role in the 2016 miniseries.

Pileggi's later work has included starring in the short-lived TV show Tarzan and co-starring with Barbara Hershey and Oliver Hudson in the short-lived TV show The Mountain. Since 2005, he has played the recurring role of character Colonel Steven Caldwell, Commander of the Earth Battlecruiser, Daedalus, in the second and subsequent seasons of the television series Stargate Atlantis. He also appeared in an episode of CSI: Crime Scene Investigation and in 2006 had a regular guest role on Day Break as Robbery/Homicide Detective Spivak. Pileggi also appeared on the show Cold Case in the episode "Offender", as a father accused of molesting and murdering his own son, who then threatens to murder one child sex offender per day until the case is reopened and solved. Pileggi also played the role of Larry Jennings, chairman of the board of the hospital, in Grey's Anatomy, and of Red Forman's friend Bull in an episode of That '70s Show.

Pileggi appeared in two episodes of Law and Order: Special Victims Unit as DEA agent Jack Hammond. Since 2008, Pileggi has played Ernest Darby, the head of a white supremacist gang called the "Nordics", in the critically acclaimed FX drama Sons of Anarchy . He also played spree killer Norman Hill (AKA The Road Warrior) on a season four episode of Criminal Minds, titled "Normal". Pileggi has also done some voice acting. His voice was featured as the githzerai Dak'kon in the video game Planescape: Torment. He voices Commissioner James Gordon on the new Kids WB! animated show The Batman. Pileggi also hosted the controversial FOX specials Breaking the Magician's Code: Magic's Biggest Secrets Finally Revealed and Conspiracy Theory: Did We Land on the Moon?. He also played the recurring role of Sam and Dean Winchester's maternal grandfather, Samuel Campbell, in the TV series Supernatural.

Pileggi starred in the TNT drama series Dallas as Harris Ryland. He was promoted to series regular as of second season.

As of 2014, Pileggi is on the advisory board of Sci-Fest, the first annual Los Angeles Science Fiction One-Act Play Festival, to be held in May 2014.

Pileggi's first marriage was to Debbie Andrews; the couple were married from 1978 to 1983. In 1996, he married his second wife, Arlene Warren. They have one daughter, Sawyer, born May 24, 1998. Warren and Pileggi were originally introduced to each other by David Duchovny, who was later the best man at their Hawaii wedding. Warren had worked on the set of The X-Files as a stand-in for Gillian Anderson. Later on in the run of the series, Warren was featured as Skinner's secretary, also named Arlene. When not acting, he spends a lot of his time horse riding and playing guitar.