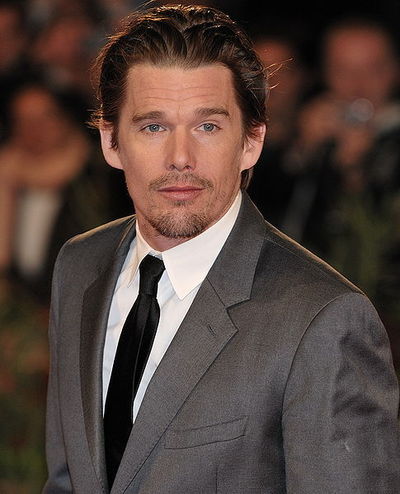 Ethan Green Hawke (born November 6, 1970) is an American actor, writer and director. He has been nominated for the Academy Awards both as an actor and a writer. He also received a Tony Award nomination for his theater work.

Hawke made his film debut in 1985 with the science-fiction feature Explorers, before making a breakthrough appearance in the 1989 drama Dead Poets Society. He then appeared in such films as White Fang (1991), A Midnight Clear (1992), and Alive (1993) before taking a role in the 1994 Generation X drama Reality Bites, for which he received critical praise. In 1995 he starred in the romantic drama Before Sunrise, and later in its sequels Before Sunset (2004) and Before Midnight (2013).

In 2001, Hawke played a young police officer in Training Day, for which he received the Screen Actors Guild and Academy Award nominations in the Best Supporting Actor category. He also garnered two screenwriting Oscar nominations for co-writing the screenplays of Before Sunset and Before Midnight. His other films include the science-fiction drama Gattaca (1997), the contemporary adaptation of Hamlet (2000), the action thriller Assault on Precinct 13 (2005), the crime drama Before the Devil Knows You're Dead (2007), and the horror film Sinister (2012).

Hawke has appeared in many theater productions including The Seagull, Henry IV, Hurlyburly, The Cherry Orchard, The Winter's Tale, and The Coast of Utopia, for which he earned a Tony Award nomination for Best Featured Actor. Aside from acting, Hawke has directed two feature films and three Off-Broadway plays. He also wrote the novels The Hottest State (1996) and Ash Wednesday (2002). Between 1998 and 2005 Hawke was married to actress Uma Thurman, with whom he has two children. Since 2008 he has been married to Ryan Hawke (née Shawhughes), and they have two daughters.

Hawke was born in Austin, Texas, to Leslie (née Green), a charity worker, and James Hawke, an insurance actuary. His maternal grandfather, Howard Lemuel Green, served five terms in the Texas Legislature and was a minor-league baseball commissioner. Hawke's parents were students at the University of Texas at the time of his birth, and separated in 1974.

After the separation, Hawke was raised by his mother. The two relocated several times, before settling in New York, where Hawke attended the Packer Collegiate Institute in Brooklyn Heights. Hawke's mother remarried when he was 10 and the family moved to West Windsor Township, New Jersey, where Hawke attended West Windsor-Plainsboro High School South. He later transferred to the Hun School of Princeton, a secondary boarding school, from which he graduated in 1988.

In high school, Hawke aspired to be a writer, but developed an interest in acting. He made his stage debut at age 13, in a school production of George Bernard Shaw's Saint Joan, and appearances in West Windsor-Plainsboro High School productions of Meet Me in St. Louis and You Can't Take It with You followed. At Hun School he took acting classes at the McCarter Theatre on the Princeton campus, and after high school graduation he studied acting at Carnegie Mellon University in Pittsburgh, eventually dropping out after he was cast in Dead Poets Society (1989). He twice enrolled in New York University's English program, but dropped out both times to pursue acting roles.

Hawke obtained his mother's permission to attend his first casting call at age 14. He secured his first film role in 1985's Explorers, in which he played alongside River Phoenix as an alien-obsessed schoolboy who builds a spacecraft with his friends. The film received favorable reviews but made poor box office revenues, a failure which Hawke has admitted caused him to quit acting for a brief period after the film's release. Hawke later described the disappointment as difficult to bear at such a young age, adding "I would never recommend that a kid act." His next film appearance was not until 1989's comedy drama Dad, where he played Ted Danson's son and Jack Lemmon's grandson.

In 1989, Hawke made his breakthrough appearance, playing shy student Todd Anderson opposite Robin Williams's inspirational English teacher in Dead Poets Society. The film was critically well-received; the Variety reviewer wrote "Hawke ... gives a haunting performance." With revenue of $235 million worldwide, the film remains Hawke's most commercially successful picture to date. Hawke later described the opportunities he was offered as a result of the film's success as critical to his decision to continue acting: "I didn't want to be an actor and I went back to college. But then the [film's] success was so monumental that I was getting offers to be in such interesting movies and be in such interesting places, and it seemed silly to pursue anything else."

Hawke's role, in the Generation X drama Reality Bites (1994) as Troy, a slacker who mocks the ambitions of his love interest (played by Winona Ryder), received critical praise. Film critic Roger Ebert called Hawke's performance convincing and noteworthy: "Hawke captures all the right notes as the boorish Troy." The New York Times noted, "Mr. Hawke's subtle and strong performance makes it clear that Troy feels things too deeply to risk failure and admit he's feeling anything at all." Nonetheless, the film was a surprise box office disappointment.

The following year Hawke again received critical acclaim, this time for his performance in Richard Linklater's 1995 drama Before Sunrise. The film follows a young American (Hawke) and a young French woman (Julie Delpy), who meet on a train and disembark in Vienna, spending the night exploring the city and getting to know one another. The San Francisco Chronicle praised Hawke and Delpy's performances: "[they] interact so gently and simply that you feel certain that they helped write the dialogue. Each of them seems to have something personal at stake in their performances."

On May 1, 1998, Hawke married actress Uma Thurman, whom he had met on the set of Gattaca in 1996. They have two children: daughter Maya, born in 1998, and son Levon, born in 2002. The couple separated in 2003, amid allegations of Hawke's infidelity, and filed for divorce the following year. The divorce was finalized in August 2005.

Hawke married for a second time in June 2008 to Ryan Hawke (née Shawhughes), who had briefly worked as a nanny to his and Thurman's children before graduating from Columbia University. Dismissing speculation about their relationship, Hawke said, "... my [first] marriage disintegrated due to many pressures, none of which were remotely connected to Ryan." They have two daughters: Clementine Jane, born in 2008, and Indiana, born in 2011.