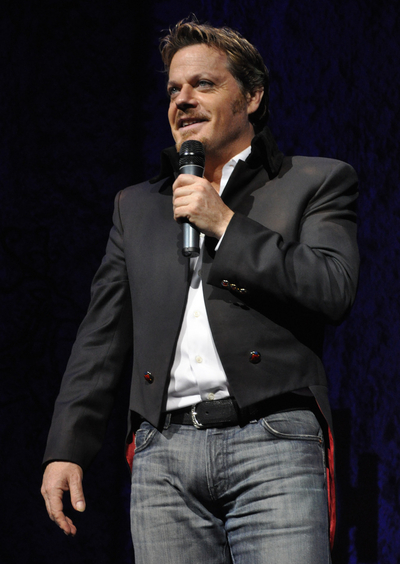 Edward John "Eddie" Izzard (born 7 February 1962) is a British stand-up comedian, actor and writer. His comedy style takes the form of rambling whimsical monologue and self-referential pantomime. He had a starring role in the television series The Riches as Wayne Malloy and has appeared in many films such as Ocean's Twelve, Ocean's Thirteen, Mystery Men, Shadow of the Vampire, The Cat's Meow, Across the Universe, The Chronicles of Narnia: Prince Caspian and Valkyrie. He is also the voice of Nigel in the 2006 animated film The Wild, Dr. Schadenfreude in the 2008 MGM animated film Igor, and Miles Axlerod in the 2011 Disney/Pixar animated film Cars 2.

Izzard has cited his main comedy role model as Monty Python, and John Cleese once referred to him as the "Lost Python". In 2009, he completed 43 marathons in 51 days for Sport Relief in spite of having no prior history of long-distance running. He is also known for his transvestism. He has won numerous awards including a Primetime Emmy Award for Individual Performance in a Variety or Music Program for his comedy special Dress to Kill, in 2000. Izzard's website won the Yahoo People's Choice Award and earned the Webby Award.

On 6 September 2012, Izzard presented the medals to the athletes who had won the 800m T54 race at the London 2012 Paralympic Games. In 2013, Eddie Izzard is on a world tour entitled Force Majeure, with dates that run throughout the year and into 2014.

Izzard was born in the Colony of Aden (modern day Aden, Yemen and neighbouring area). He was the younger son of British parents Dorothy Ella, a midwife and nurse, and Harold John Izzard, an accountant who was working in Aden with British Petroleum. A year after his birth, the family moved to Bangor in Northern Ireland and lived there until he was five. The family then moved to Skewen in Wales, where his mother died of cancer when Izzard was six and his brother Mark was eight.

Following his mother's death, Izzard attended boarding schools such as St John's School, Porthcawl, St. Bede's Prep School, and Eastbourne College. Izzard has said that he knew he was a transvestite at the age of four, after watching another boy being forced to wear a dress by his sisters, and that he knew he wanted to be an actor at the age of seven.

Izzard began to toy with comedy at the University of Sheffield, with student friend Rob Ballard. After leaving his accountancy degree course, he and Ballard took their act to the streets, often in Covent Garden. After his split with Ballard, Izzard spent a great deal of the early 1980s working as a street performer in Europe and the United States. He then moved his act into the stand-up comedy venues of Britain. His first gig was at the Banana Cabaret in Balham, London.

In 1987, he made his first stage appearance at the Comedy Store in London. In 1989, he met actress Sarah Townsend who was running a Fringe venue at the Edinburgh Festival. He refined his material throughout the 1980s, and in the early 1990s he finally began earning some measure of recognition through his improvisation, in part at his own club "Raging Bull" in Soho.

In 1996, Izzard had a part in his first United States-produced film, The Secret Agent, where he met and befriended Robin Williams. Williams already knew of Izzard's act and discussed bringing him to the United States. As a result, Izzard took Definite Article on a successful stint to New York in the same year and, as a support act to Williams, took Dress to Kill to San Francisco in 1998. His US breakthrough came in 1999 when Dress to Kill was shown on the American television channel HBO, about a year or so after he performed the show on tour in the US, UK and France. Suddenly, America was aware of Izzard and the show went on to earn him two Emmy Awards in 2000 (for performance and writing).

Izzard's style is heavily influenced by Monty Python, or rather Spike Milligan, especially in his use of a stream-of-consciousness delivery that jumps between topics as he free associates on stage. He does not generally work from a script, owing to his dyslexia. Instead, he interrupts himself with new joke ideas, the characters he portrays turn into other characters, and he nonchalantly leaps from topic to topic. This often results in brief pauses in the routine which he fills with 'so, yeah', and other verbal tics that have become his trademarks. Thinking aloud is also part of Izzard's ongoing attempt to make the process of writing the show itself part of the humour.

During his Stripped tour, Izzard said he realised he was an atheist. "I was warming the material up in New York, where one night, literally on stage, I realised I didn’t believe in God at all. I just didn’t think there was anyone upstairs." He keeps his romantic life private, saying one of the reasons is due to the wishes of his companions not wanting to become content for his show. Izzard dated Sarah Townsend, the director of the documentary Believe: The Eddie Izzard Story, whom he first met while she was running a Fringe venue at the Edinburgh Festival in 1989.