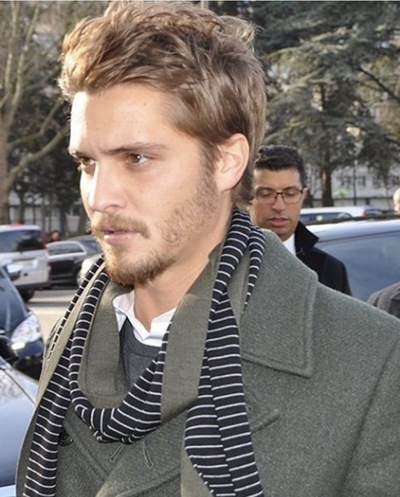 Luke Timothy Grimes (born January 21, 1984) is an American actor. He is best known for his roles in the acclaimed film American Sniper and the Fifty Shades film series.

Grimes was born in Dayton, Ohio, the youngest of four children of Angie (Barker) and the Rev. Randy Grimes. Grimes graduated from Dayton Christian High School in 2002. He moved to New York City to study acting at the American Academy of Dramatic Arts.

Grimes has appeared in All the Boys Love Mandy Lane, War Eagle, Arkansas, and Assassination of a High School President, which received a limited release in March 2009. He also appeared in the ABC drama Brothers & Sisters, as Ryan Lafferty, the illegitimate son of William Walker, patriarch of the show's family. Beginning with Season 4, he became a series regular.

He starred in the 2010 FX movie pilot, "Outlaw Country", with Haley Bennett and Mary Steenburgen. Grimes played a cowboy named Eli Larkin. The series was not picked up by FX, but the pilot aired on August 23, 2012 as a television movie. In 2012, he appeared in the Liam Neeson thriller Taken 2 as Neeson's daughter's boyfriend.

He also portrayed James in True Blood for six episodes during the shows sixth season. But Grimes quit in the series seventh and final season reportedly after learning of the character's bisexual nature and upcoming relationship with fan-favorite character, Lafayette (Nelsan Ellis).

Grimes played Todd Belkin in Freeheld opposite Julianne Moore, Steve Carell, Ellen Page and Michael Shannon. Peter Sollett directed this independent feature film, which is based on a true story.