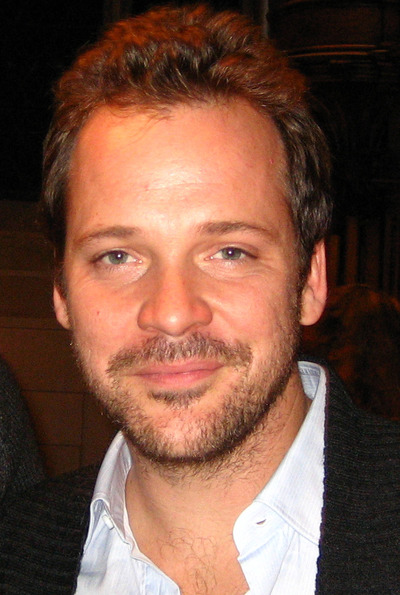 John Peter Sarsgaard (/ˈsɑrzɡɑrd/; born March 7, 1971) is an American film and stage actor. He landed his first feature role in the movie Dead Man Walking in 1995. He then appeared in the 1998 independent films Another Day in Paradise and Desert Blue. That same year, Sarsgaard received a substantial role in The Man in the Iron Mask (1998), playing Raoul, the ill-fated son of Athos. Sarsgaard later achieved critical recognition when he was cast in Boys Don't Cry (1999) as John Lotter. He landed his first leading role in the 2001 film The Center of the World. The following year, he played supporting roles in Empire, The Salton Sea, and K-19: The Widowmaker.

For his portrayal of Charles Lane in Shattered Glass, Sarsgaard won the National Society of Film Critics Award for Best Supporting Actor and was nominated for the 2004 Golden Globe Award for Best Supporting Actor. Sarsgaard has appeared in an eclectic range of films, including the 2004 comedy-drama Garden State, the biographical film Kinsey (2004), the drama The Dying Gaul (2005) and big-budget films such as Flightplan (2005), Jarhead (2005), Orphan (2009), Knight and Day (2010), and the superhero film Green Lantern (2011).

Sarsgaard was born at Scott Air Force Base, Illinois, the son of Judy Lea (née Reinhardt) and John Dale Sarsgaard. His father was an Air Force engineer and later worked for Monsanto and IBM. He is of Danish, German, Norwegian, Austrian, Ulster-Scots, English, and Irish ancestry (his surname originates in Denmark, where two of his paternal great-great-grandparents were born). Sarsgaard was raised a Roman Catholic and served as an altar boy. His family moved more than 12 times during his childhood, following his father's job. At the age of 7, Sarsgaard originally wanted to become a soccer player and took up ballet to help improve his coordination. After suffering several bad concussions while playing soccer, he gave up the sport and became interested in writing and theater.

Sarsgaard attended Fairfield College Preparatory School, a private Jesuit boys' school in Connecticut, where he became interested in movies. Following his graduation from Fairfield Prep, he attended Bard College in New York for two years before transferring to Washington University in St. Louis in 1991, where he co-founded an improvisational comedy troupe "Mama's Pot Roast." While at Washington University, Sarsgaard began performing in plays in an offshoot of New York's Actors Studio; His first role was as the servant Lawrence in Molière's Tartuffe. In 1993, he graduated with a degree in history and moved to New York.

Sarsgaard branched out with guest roles in television productions filmed in New York City, with Law & Order in 1995, and New York Undercover (1997) as well as an appearance in the 1997 HBO special Subway Stories. He appeared in his first film role in Dead Man Walking (1995), where he was cast as a murdered teenager, killed by Sean Penn's character.

His next film roles were in a series of independent features: Another Day in Paradise (1997), part of an ensemble cast that included James Woods, Melanie Griffith, Vincent Kartheiser, and Natasha Gregson Wagner, and In Desert Blue (1998), where he had a supporting role in the film.

In 1999, Sarsgaard earned critical recognition in Kimberly Peirce's Boys Don't Cry, where he was cast as notorious killer John Lotter. The film is based on the real-life story of Brandon Teena, a transman who was raped and murdered in 1993 by Lotter and Tom Nissen after they found out that he was actually a woman posing as a man. Boys Don’t Cry received overwhelmingly positive acclaim from critics, and his performance was critically well received.

Among his most notable romantic relationships, Sarsgaard dated burlesque dancer Dita Von Teese and model and actress Shalom Harlow. Early in his film career, he dated photographer Malerie Marder, a close friend from his days attending Bard College, who had featured Sarsgaard in some of her early work. Sarsgaard has been in a relationship with actress Maggie Gyllenhaal, the sister of his close friend Jake Gyllenhaal, since 2002. In April 2006, they announced their engagement, and on May 2, 2009, they married in a small ceremony in Brindisi, Italy. They have two daughters, Ramona, born October 3, 2006, and Gloria Ray, born April 19, 2012. The family lives in Brooklyn, New York.