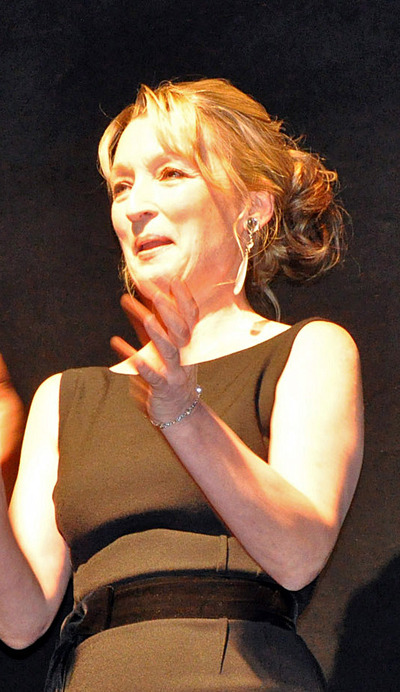 Lesley Manville (born 12 March 1956) is an English actress of film, theatre and television. She frequently collaborates with director Mike Leigh, twice being named British Actress of the Year at the London Film Critics Circle Awards for her performances in the Mike Leigh films, All or Nothing and Another Year. She is also a BAFTA and Olivier award nominee.

Born in Brighton, Sussex, Manville was brought up in nearby Hove, one of three daughters of a taxicab driver. Training as a soprano singer from age 8, she twice became under-18 champion of Sussex. She began acting as a teenager, appearing in television series such as King Cinder. As a result, at age 15, she gained a place at the Italia Conti Academy of Theatre Arts.

Her first job was in West End theatre in the musical I and Albert directed by John Schlesinger, which was followed by television presentation on Westward Television's version of the BBC's Blue Peter. She paid for her first flat taking a part on Emmerdale Farm, which lasted for 80 episodes.

Manville built a career as a distinctive theatre actress, appearing in new plays at the Royal Shakespeare Company's Warehouse and Royal Court Theatre. She played Sister Croy in The Sons of Light; Ali in Savage Amusement; Isabel in Trust Us and Lucy in Lucy Page's Lucy.

In 1979, she met Mike Leigh, who was looking for RSC actors who could improvise. She starred in the 1980 BBC play Grown-Ups. She subsequently appeared in Leigh's films High Hopes, Secrets & Lies, Topsy-Turvy, All or Nothing and Another Year. Other film appearances include: Dance with a Stranger, Sammy and Rosie Get Laid, High Season and The Great Ecstasy of Robert Carmichael, as well as A Christmas Carol and Womb.

Manville has also remained active on television, with credits such as The Gentle Touch, Coronation Street, Bulman, Soldier Soldier, Ain't Misbehavin', Tears Before Bedtime, Kavanagh QC, Holding On, Silent Witness, Real Women, The Cazalets, North and South and Cranford and "Mayday" in 2013.

As of September 2011 Manville was starring in Mike Leigh's play Grief at the National Theatre.

She met her first husband Gary Oldman while working at the Royal Court Theatre. Oldman left her in 1989, three months after their son, Alfie, was born. Her second marriage was to Joe Dixon. As of 2007, Manville lived with her son in East Grinstead, West Sussex.