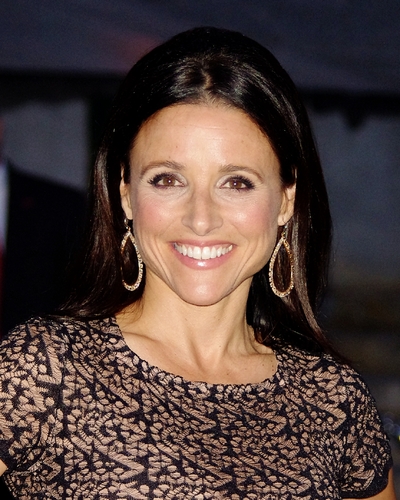 Julia Scarlett Elizabeth Louis-Dreyfus (born January 13, 1961) is an American actress, comedian and producer, known for her work on the NBC sitcom Seinfeld (1989–98), the CBS sitcom The New Adventures of Old Christine (2006–10) and the HBO comedy series Veep (2012–present).

Louis-Dreyfus broke into comedy as a performer in The Practical Theatre Company in Chicago, which led her to become a cast member in Saturday Night Live (SNL) from 1982 to 1985. Her breakthrough came in 1989 with the character of Elaine Benes on Seinfeld, which became one of the most critically and commercially successful sitcoms of all time. In 2002, she and her husband, Brad Hall, developed Watching Ellie, which lasted two seasons. In 2006, she played Christine Campbell in The New Adventures of Old Christine, which had a five-season run on CBS. In 2012, she began playing Selina Meyer in Veep, which has recently been renewed for a third season on HBO.

Throughout her career, Louis-Dreyfus has received three Emmy Awards, a Golden Globe Award and five Screen Actors Guild Awards. She is the only woman who has won the Emmy three times, for three separate comedy series. Also, she is the most nominated actress in Emmy Award history with a total of fourteen nominations for her supporting role on Seinfeld, and her leading roles on The New Adventures of Old Christine and Veep, surpassing the record long-held by Lucille Ball. She also received nominations for producing the first two seasons of Veep, taking her total Emmy tally to sixteen nominations.

In May 2010, Louis-Dreyfus received a star on the Hollywood Walk of Fame for her contribution to the broadcast television industry.

Louis-Dreyfus was born Julia Scarlett Elizabeth Louis-Dreyfus in New York City. Her mother, Judith, was a writer and special needs tutor, and her father, the billionaire Gérard Louis-Dreyfus, chaired Louis Dreyfus Energy Services. She is the great-great-granddaughter of Léopold Louis-Dreyfus, who in 1851 founded the Louis Dreyfus Group, a commodities and shipping multinational, which members of the family control to this day. Her paternal grandfather, Pierre Louis-Dreyfus(1908-2011), was president of the Louis Dreyfus Group; Pierre was part of a Alsatian Jewish family, and remained in France during World War II, fighting as a cavalry officer and later in the French Resistance. During this time, her father fled to America from France. Her paternal grandmother, Dolores (Neubauer), and her mother, were American. In 1962, one year after her birth, her parents divorced. After relocating to Washington, D.C. when Julia was eight, her mother married L. Thompson Bowles, Dean of the George Washington University Medical School.\

Louis-Dreyfus has two half-sisters on her father's side, Emma and Phoebe. Robert Louis-Dreyfus (1946–2009), one of her cousins, was former CEO of Adidas and owner of the Olympique de Marseille football club. Louis-Dreyfus's maternal half-sister, Lauren Bowles, is an actress, who has appeared with Louis-Dreyfus on Seinfeld, Watching Ellie and The New Adventures of Old Christine.

Louis-Dreyfus spent her childhood in several states and countries in connection with her stepfather's work with Project HOPE, including Sri Lanka, Colombia and Tunisia. She graduated from the Holton-Arms School in Bethesda, Maryland in 1979, and attended Northwestern University in Evanston, Illinois, where she was a member of the Delta Gamma sorority and studied theatre for several years before dropping out due to a professional acting job offer.

As part of her comedic training, Louis-Dreyfus appeared in The Second City, one of Chicago's best-known improvisation theatre groups (whose alumni include Alan Arkin, Steve Carell, Stephen Colbert, Tina Fey, Amy Poehler and Shelley Long). It was her performance with the Practical Theatre Group at their "Golden 50th Anniversary Jubilee" that led to her being asked to join the cast of Saturday Night Live at just the age of 21.

In the early-1990s Louis-Dreyfus became famous for the role of Elaine Benes on NBC's Seinfeld. She played the role for nine seasons, appearing in all but three episodes. One of the episodes that she did not appear in was the inaugural pilot episode, due to the fact that her character was not initially intended to be a part of the series. It was only after the first episode that NBC executives felt the show was too male-centric, and demanded that creators Jerry Seinfeld and Larry David add a woman to the cast. It was revealed in the commentary on the DVD package that the addition of a female character was the condition of commissioning the show. Louis-Dreyfus won the role over several other actresses who would also eventually enjoy their own TV success, including Patricia Heaton, Rosie O'Donnell and Megan Mullally.

While at Northwestern, Louis-Dreyfus met future husband and Saturday Night Live comedian Brad Hall. She and Hall married in 1987. They have two children together, Henry born in 1992 and Charles born in 1997. In 2007, she was invited back to Northwestern to receive an honorary Doctor of Arts degree.

Louis-Dreyfus has stated that she holds much respect for "women who are not afraid of making themselves look bad or foolish to get a laugh", and cites her acting idols as Lucille Ball, Mary Tyler Moore, Madeline Kahn, Teri Garr, Valerie Harper and Cloris Leachman.

Actress Tina Fey has stated that Louis-Dreyfus serves as inspiration for her character Liz Lemon on the award winning NBC comedy series 30 Rock.