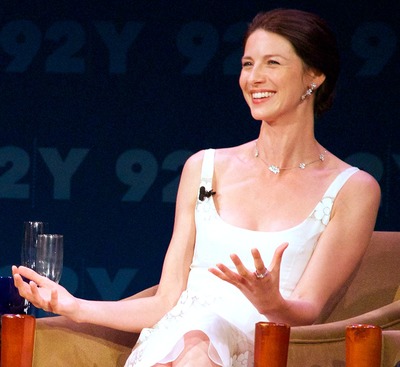 Caitriona Balfe (born 4 October 1979) is an Irish actress and model. She is best known for her performance as Claire Beauchamp in the Starz series Outlander, for which she received a nomination for the Golden Globe Award for Best Actress in a Television Series - Drama.

In 1999, while studying Theatre at the DIT Conservatory of Music and Drama, Balfe was offered work as a fashion model in Paris. She was featured both in advertising campaigns and on runways for brands such as Dolce & Gabbana, Moschino, Roberto Cavalli, Max Mara, Bottega Veneta, H&M and Oscar de la Renta over the course of the following ten years, before she returned her focus towards acting. Balfe has also appeared in films such as Super 8, Now You See Me, Escape Plan and Money Monster, and has had leading roles in The Beauty Inside, Crush, and H+: The Digital Series.

Balfe started modeling after she was scouted by an agent while she was collecting money for charity at a local mall. At nineteen, after working as a model in Dublin for a few months, she caught the attention of a visiting Ford Models scout, who offered her the chance to work for them in Paris. Her career highlights include opening and closing shows for Chanel, Moschino, Givenchy, Dolce & Gabbana, Alberta Ferretti, and Louis Vuitton; walking in multiple fashion shows for notable brands:[8] twelve shows for Dolce & Gabbana, eight for Chanel, seven for Marc Jacobs, Narciso Rodriguez and Moschino, six for Etro, five for Armani, Roberto Cavalli, Max Mara, Ann Demeulemeester and Louis Vuitton, four for Givenchy, Oscar de la Renta, Missoni, Bottega Veneta, Burberry, Alberta Ferretti, Alexander McQueen and Emanuel Ungaro, and three for Rochas, Christian Lacroix, Laura Biagiotti, Cacharel, BCBG Max Azria, Sonia Rykiel, Alessandro Dell'Acqua and Kenzo; doing advertising campaigns for: Calvin Klein, Levi’s, Max Mara, Oscar de la Renta, Bally, Dolce & Gabbana, Moschino, Costume National, Escada, Bottega Veneta, Hush Puppies, Mango, Neiman Marcus, BCBG Max Azria, Blumarine, Dries Van Noten, Wella, Roberto Cavalli, Victoria’s Secret, and H&M; walking in the 2002 Victoria's Secret Fashion Show; and appearing on the cover of magazines such as Vogue, Harper’s Bazaar, and ELLE. She walked in seventy-three fashion shows in the 2002 season, ninety-six in the 2003 season, and eighty-three in the 2004 season. Often credited professionally as simply Caitriona, at the height of her career she was considered to be in the Top 20 of most in-demand models in the world.

While living in New York, Balfe played the minor role of an employee of the magazine Runway in the 2006 film The Devil Wears Prada. In 2009, after a decade-long modeling career, Balfe returned to her initial career choice, and moved from New York to Los Angeles, spending her first year and a half in the city exclusively taking acting classes, first at the Warner Loughlin Studios and then at the Sanford Meisner Center and the Judith Weston Studios. Balfe has appeared in the films Super 8, as the protagonist's mother, Now You See Me, as Michael Caine's character's wife, and Escape Plan, as the CIA lawyer that hires Sylvester Stallone's character.

In 2012 she portrayed Alex #34 in The Beauty Inside, a social film divided into six episodes that narrates the story of a man named Alex (Topher Grace) who wakes up in a different body every day. In 2013 she starred in the music videos for "First Fires" by British musician Bonobo, and for "Chloroform" by French band Phoenix, the latter directed by Sofia Coppola.

Balfe was part of the main cast of the Warner Bros. web series H+: The Digital Series during 2012 and 2013, in which she played Breanna Sheehan, one of the executives of a biotechnology company that develops an implanted computer which allows people to be connected to the Internet 24 hours a day.

In September 2013 Balfe was cast as the lead character, Claire Beauchamp Randall Fraser, on the Starz television series Outlander, based on the novels written by Diana Gabaldon; the series premiered in August 2014. She plays a mid-20th-century nurse who is transported back in time to the war-torn mid-18th-century Scottish Highlands. Both the series and her performance have received critical acclaim, with Richard Lawson of Vanity Fair saying "it helps immensely that Balfe is such an appealing actress, [she] makes Claire a spirited, principled, genuinely heroic heroine." Tim Goodman of The Hollywood Reporter wrote that Balfe is "reason enough to watch; she's a confident actress who brings various shades to her character." James Poniewozik of Time labelled Balfe's portrayal as "wry, [and] infectiously engaging." Angelica Jade Bastién of The New York Times stated that "the success of Outlander rests on Caitriona Balfe’s performance. [Her] devastation is seen in everything from the slack expression that crosses her face to the listless way she carries her body."

In December 2014 Entertainment Weekly named Balfe one of its 12 Breakout Stars of 2014; that month she was also voted "Woman Of The Year" at BBC America's Anglophenia Fan Favorites tournament.

Balfe co-starred in the film Money Monster (2016), directed by Jodie Foster and starring George Clooney and Julia Roberts. She played the head of PR of a company whose stock bottoms out, causing a man to lose all of his savings and subsequently take hostages on a live TV show.

Balfe was born in Dublin, Ireland, and grew up in the village of Tydavnet, near Monaghan, in a family of seven; her father is a retired Garda Sergeant. She is currently based in Glasgow, having previously lived in Los Angeles when she started acting professionally, and in New York, Paris, London, Milan, Hamburg, and Tokyo while she worked as a model. In addition to English, she speaks fluent Irish Gaelic and is conversational in French.