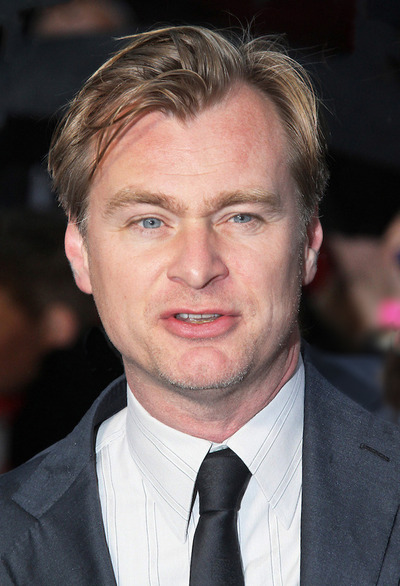 Christopher Jonathan James Nolan (born 30 July 1970) is a British-American film director, screenwriter, and producer, who is well known for directing The Dark Knight Trilogy (2005–2012), the science fiction/heist film Inception (2010), and the psychological thrillers Memento (2000), and The Prestige (2006). He has received nominations from the Academy of Motion Picture Arts and Sciences(Oscars), Hollywood Foreign Press Association(Golden Globes), British Academy of Film and Television Arts (BAFTA's), and the Directors Guild of America (DGA).

In total, his directorial efforts have grossed approximately US$1.6 billion in North America and US$3.5 billion worldwide, making him one of the most commercially successful filmmakers of all time. In July 2012, Christopher Nolan became the youngest director to be honoured with a hand and footprint ceremony at Grauman's Chinese Theatre in Los Angeles

Christopher Nolan was born in London in 1970, to Brendan Nolan, who worked as an advertising copywriter, and Christina Nolan, a flight attendant. As a dual citizen of the United Kingdom and United States, Nolan grew up on both sides of the Atlantic. He started making films at the age of seven, borrowing his father's Super 8 camera and shooting short films with his action figures. Around the same time as he began developing an interest for film, his father brought him and his older brother to Leicester Square for a screening of 2001: A Space Odyssey (1968), which had just been re-released in England in the wake of Star Wars' (1977) success. Nolan recalls, "I remember very clearly just the experience of being transported to another world. I was a huge Star Wars fan at the time. But this was a completely different way of experiencing science fiction. I was seven years old, so I couldn’t claim to have understood the film. I still can’t claim that. But as a seven-year old, I didn’t care about understanding the film. I just felt this extraordinary experience of being taken to another world."

Nolan was educated at Haileybury and Imperial Service College, an independent school on Hertford Heath in Hertfordshire, and later read English literature at University College London (UCL). He chose UCL specifically for its filmmaking facilities, which consisted of a Steenbeck editing suite and 16mm film cameras. Reading contemporary novels and exploring pulp crime fiction, especially from the likes of Jim Thompson, Raymond Chandler and James Ellroy, made him realize that filmmakers could utilize the same narrative freedoms as authors had for centuries. Nolan was also the president of the Union's Film Society; one of the oldest and most well established film societies in England. Along with his long-time film producer, Emma Thomas, he would screen 35mm feature films during the school year and use the money earned from ticket sales to produce 16mm films during the summers. He was later named an Honorary Fellow of UCL. After graduating he earned a living by directing corporate videos and industrial films, before moving to Los Angeles and getting a freelance job as a script reader.

During the early 1990s, Nolan was briefly affiliated with Dan Eldon's African charity projects, accompanying a five-week-long safari starting in Kenya, through Tanzania, and into the Republic of Malawi, to deliver a Land Rover and money to create a water well for a refugee camp.

Nolan began his filmmaking career with a series of short films. In 1989, Nolan and Roko Belic collaborated on a surreal 8mm short, Tarantella (1989), which was shown on Image Union, an independent film and video showcase on the Public Broadcasting Service. Larceny (1995), a short he made in black-and-white with a restricted cast, crew and equipment in the space of a weekend, contained many traits later to be seen in his first feature. Larceny was funded by Nolan himself, but shot using the society's equipment. It played at the Cambridge Film Festival in 1996, and is considered to be one of the best shorts produced by UCL in recent generations. He also made Doodlebug (1997), a kafkaesque short about a man chasing an insect with a shoe around a flat, only to discover on killing it that it is a miniature of himself. Nolan wrote, directed, co-produced, photographed, and edited the movie. Jeremy Theobald, who played the lead in both Larceny and Doodlebug, would later play the protagonist in Nolan's first feature. The short has since been released on home video by Cinema16.

In 1998, Nolan directed his first feature film, Following. The film depicts an unemployed young writer who trails strangers through London, hoping that they will provide inspiration for his first novel, but ends up being drawn into a criminal underworld when he fails to keep his distance. The inspiration for the film came directly from his experience of living in London and having his flat broken into: "There is an interesting connection between a stranger going through your possessions and the concept of following people at random through a crowd – both take you beyond the boundaries of ordinary social relations". The film was made on a shoestring budget of only £3,000, and shot on weekends, over the course of a year. He was primarily working with friends he had met through the film society, such as musician and film composer David Julyan. To conserve expensive film stock, every scene in the film was rehearsed extensively to ensure that the first or second take could be used in the final edit. He also filmed without professional film lighting equipment, largely employing available light. This was made easier by the decision to use 16 mm black and white film stock. Nolan directed the film from his own script, and also photographed and edited it himself.

"Following" won several awards during its festival run, including the Tiger Award at the Rotterdam International Film Festival and the "Best First Feature" prize at the San Francisco International Film Festival. The film was well received by critics, with The New Yorker writing that Following echoed Hitchcock classics, but was "leaner and meaner". Elliot Grove, the founder of Raindance Film Festival and British Independent Film Awards, included Following in his list over the best no-budget films, calling it "one of the most astounding debuts ever".

In 1997, Nolan married Emma Thomas, his girlfriend at UCL and long-time film producer. They own the production company Syncopy Inc. together. The name derives from "syncope", the medical term for fainting or loss of consciousness. They have four children, Oliver, Magnus, Rory and Flora, and reside in Los Angeles.