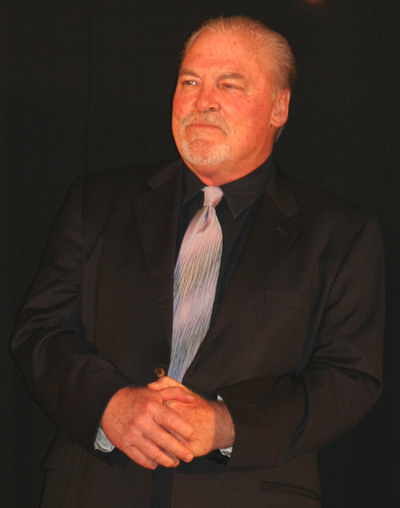 Walter Stacy Keach Jr. (born June 2, 1941) is an American actor and narrator. He is most famous for his dramatic roles; however, he has done narration work in educational programming on PBS and the Discovery Channel, as well as some comedy (particularly his role in the Fox sitcom Titus as Ken, the hard-drinking, chain-smoking, womanizing father of comedian Christopher Titus and for Sergeant Stedenko in Up in Smoke) and musical roles.

Keach was born in Savannah, Georgia, the son of Mary Cain (née Peckham), an actress, and Walter Stacy Keach, a theater director, drama teacher, and actor. His brother James Keach is an actor and television director. Keach graduated from Van Nuys High School in June 1959, where he was class president, then earned two BA degrees at the University of California, Berkeley (1963), one in English, the other in Dramatic Art. He earned an M.F.A. at the Yale School of Drama and was a Fulbright Scholar at the London Academy of Music and Dramatic Art.

Keach played the title role in MacBird!, an Off Broadway anti-war satire by Barbara Garson staged at the Village Gate in 1966. Then, in 1967, he was cast, again Off Broadway, in George Tabori's The Niggerlovers with Morgan Freeman in his acting debut. To this day, Freeman credits Keach with teaching him the most about acting. Keach first appeared on Broadway in 1969 as Buffalo Bill in Indians by Arthur Kopit. Early in his career, he was credited as Stacy Keach, Jr. to distinguish himself from his father Stacy Keach, Sr. He played the lead actor in The Nude Paper Sermon anavant-garde musical theatre piece for media presentation, commissioned by Nonesuch Records by composer Eric Salzman.

He has won numerous awards including Obie awards, Drama Desk Awards, and Vernon Rice Awards. In the early 1980s, he starred in the title role of the national touring company of the musical Barnum composed by Cy Coleman.

He played a rookie cop in The New Centurions (1972), opposite George C. Scott. That year he also starred in Fat City, a boxing film directed by John Huston. He was the first choice for the role of father Damien Karras in the 1973 movie The Exorcist, but he did not accept the role. He went on to play Kane in the 1980 movie The Ninth Configuration, written and directed by Blatty; this role was itself intended for Nicol Williamson.

One of his most convincing screen performances was as Frank James (elder brother of Jesse) in The Long Riders (1980). Keach excelled in this role, portraying a character who shows maturity and perspective during the outlaws’ doomed career, but who is ultimately imprisoned by fraternal ties. Long Riders included brothers playing brothers and Stacey's brother James Keach played Jesse James; the Carradine and Quaid brothers also starred in the film.

Keach has been married four times: to Kathryn Baker in 1964, to Marilyn Aiken in 1975, to Jill Donahue in 1981, and to Malgosia Tomassi around 1986. He has two children from his third marriage. He was also romantically linked to singer Judy Collins in the early 1970s.

Keach was born with a cleft lip and a partial cleft of the hard palate and underwent numerous operations as a child. Throughout his adult life he has often worn a mustache to hide the scars. He is now the honorary chairman of the Cleft Palate Foundation, and advocates for insurance coverage for such surgeries.