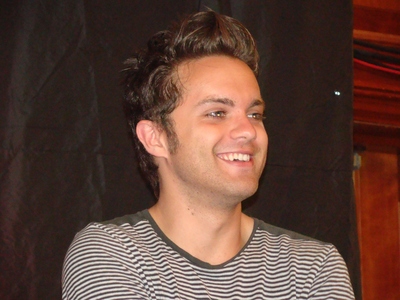 Thomas Alexander Dekker (born December 28, 1987) is an American film and television actor and a musician. He is also a singer and has written and produced two albums.

He is best known for his roles as John Connor in Terminator: The Sarah Connor Chronicles, Nick Szalinski on Honey, I Shrunk the Kids: The TV Show, and Zach on Heroes. He also did the voice of Littlefoot in The Land Before Time V-IX (singing voice in The Land Before Time V) and as Fievel Mousekewitz in An American Tail: The Treasure of Manhattan Island and An American Tail: The Mystery of the Night Monster. He is also known for playing Jesse Braun in the 2010 remake of A Nightmare on Elm Street, and recently, Smith in Gregg Araki's film Kaboom. Dekker most recently starred as Adam Conant on The CW series The Secret Circle.

Dekker was born in Las Vegas, Nevada. His mother, Hilary, is a concert pianist, acting coach, actress, and singer, and his late father, David John Ellis Dekker, was an artist, set designer, opera singer, and actor. His mother is Welsh and his father was an American with Dutch ancestry. As a child, he and his parents moved all over the world, spending time in the United States, Europe (Yorkshire, England, in particular) and Canada.

Starting his acting career at age six, Dekker was first seen in the soap The Young and the Restless. He then appeared in Star Trek Generations and Village of the Damned. Later, in 1997, he became a regular on the Disney Channel Original Show Honey, I Shrunk the Kids: The TV Show based on the movie of the same name where he played Nick Szalinski for three years. After the show ended in 2000, he went on to appear in Run of the House, Fillmore!, CSI: Crime Scene Investigation, House, Boston Public, Reba and 7th Heaven. He appeared in films such as Campus Confidential and An American Tail: The Mystery of the Night Monster. He has won three Young Artist Awards for his work in The Land Before Time films and one for his guest appearance on Boston Public.

On April 20, 2011 in an interview with Out magazine Dekker spoke about his sexuality, which has been the subject of speculation. "I’ve only really had relationships with women, but I'm certainly not closed to it. If there are possibilities of being able to do anything in life, why would you say you would never take any up? In the later chunk of my teen years I was so all over the place with sex. It was terrible. I never really had a real relationship at all. During puberty, it's all about sex, and it's all about figuring yourself out. I think I overdid it when I was younger."