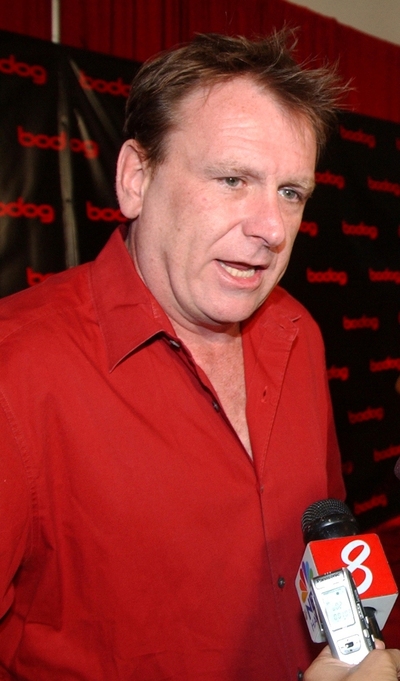 Colin Quinn (born June 6, 1959) is an American stand-up comedian, actor, and writer. On television, he is best known for his work on Saturday Night Live, where he anchored Weekend Update, on MTV's 1980's game show Remote Control, where he served as the announcer/sidekick, and as host of Comedy Central's late-night panel show Tough Crowd with Colin Quinn. Notable film work includes his role as Dickey Bailey in the Grown Ups films and co-starring as Amy Schumer's father in the film Trainwreck.

Quinn has also become known for his comedic one-man shows that offer his unique takes on history and growing up in New York City. As of 2015, he has written and starred in five shows: Irish Wake, My Two Cents, Long Story Short, Unconstitutional, and The New York Story, two of which he collaborated on with Jerry Seinfeld as director. Long Story Short was also filmed as an HBO special that aired on April 9, 2011.

Quinn was born and raised in the Park Slope neighborhood of Brooklyn, New York, the son of teachers. He attended the State University of New York at Stony Brook, in Stony Brook, Long Island, but did not graduate. He stopped drinking in the early 1980s after several bad experiences with alcohol, including blackouts and arrests.

Quinn began performing stand-up comedy in 1984, and first achieved fame in 1987 as the sidekick announcer of the MTV game show Remote Control, which lasted five seasons. In 1989, he hosted the A&E stand-up showcase Caroline's Comedy Hour, and wrote and acted in the comedic short/music video "Going Back to Brooklyn" (a parody of LL Cool J's "Going Back to Cali") with Ben Stiller. He wrote for In Living Color, and co-wrote and produced the movie Celtic Pride, which starred Damon Wayans and Dan Aykroyd.

In 1995, Quinn was hired by Saturday Night Live as a writer and featured player. He became a full cast member during the 1997–1998 season. He established himself on the show with characters such as "Lenny the Lion" and "Joe Blow", and did the recurring segment "Colin Quinn Explains the New York Times".

He began hosting Weekend Update in January 1998 after Norm Macdonald's firing, and anchored the segment until his departure in 2000. Quinn commented on a number of highly publicized media circuses, including the Clinton-Lewinsky Scandal and the Microsoft Anti-Trust Trial.

During his SNL tenure, Quinn was offered the role of Scott Evil in Austin Powers: International Man of Mystery by Mike Myers, which he turned down. The role was accepted by Seth Green. Quinn has called it the only project he has regretted turning down.