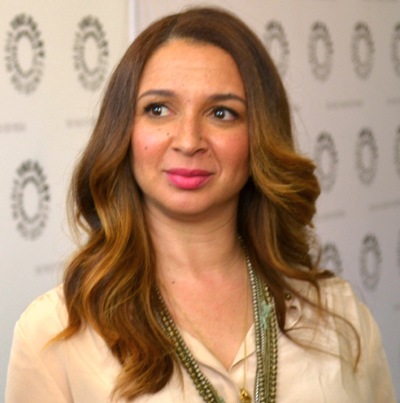 Rudolph was born in Gainesville, Florida. She is the daughter of soul singer-songwriter Minnie Riperton and composer, songwriter, and producer Richard Rudolph. Her father is an Ashkenazi Jew, and her mother was African-American. Her paternal grandfather was Sidney Rudolph, a philanthropist who once owned all of the Wendy's and Rudy's restaurants in Dade County, Florida. Her great-grandfather, who was born in Vilnius, Lithuania, changed his surname from "Rudashevsky" to "Rudolph," and was one of the founding members of Congregation Beth Shalom, a Conservative Jewish synagogue in the Squirrel Hill neighborhood of Pittsburgh, Pennsylvania.

Rudolph's parents moved to Los Angeles, California when she and her brother Marc were very young, and they grew up primarily in the Westwood neighborhood.

In 1990, Rudolph graduated from Crossroads School in Santa Monica, California, where she became friendly with fellow students Gwyneth Paltrow and Jack Black, and continued her education at the University of California, Santa Cruz, where she graduated in 1995 with a Bachelor of Arts degree in photography from Porter College.

In May 2000, Rudolph joined the cast of Saturday Night Live as a featured player for the final three episodes of the 1999–2000 season, after a stint as a member of The Groundlings improv troupe, where she met future Saturday Night Live cast member Will Forte.[8] Rudolph's musical talents were frequently employed on Saturday Night Live. She sang as Beyoncé Knowles in the Prince Show sketches, as the "Space Creature" in the Gays in Space sketches, except for the one on the season 31 episode hosted by Peter Sarsgaard, because it aired around the time Rudolph was on maternity leave. Friend Will Forte substituted for her during that episode. Her ability to change her looks and her command of many accents also led to her playing an unusually wide range of ethnicities on the show, often with only a change of wigs. She has portrayed characters of Northern european (Paris Hilton, Liza Minnelli, Barbra Streisand, Lisa Kudrow), Asian (Lucy Liu, Lisa Ling), black (Diana Ross, Tina Turner), and Hispanic (Charo) descent. As "Nooni Schoener," Rudolph, along with Fred Armisen, created a couple from an unspecified Scandinavian country, who have unplaceable accents and bewilderingly foreign manners. Rudolph was also able to play male characters such as Scott Joplin, Justin Guarini, and Mario Vazquez.

In addition to her work on Saturday Night Live, Rudolph has appeared on other television shows, including the CBS medical drama series City of Angels and Chicago Hope. She had small parts in Chuck & Buck, Gattaca, As Good as It Gets, Duplex and Duets; she was also a music supervisor for Duets. Her first prominent film role came in 2006 with A Prairie Home Companion. Earlier, she had costarred with Luke Wilson in the 2005 Mike Judge sci-fi comedy Idiocracy, although that film was shelved until September 2006 and then only given a limited release. She also guest-starred as Rapunzel in the DreamWorks animated film Shrek the Third. She guest-starred as Julia in The Simpsons episode "The Homer of Seville". Rudolph guest-starred as character Athena Scooberman in NBC's Kath & Kim, and starred in the film Away We Go with The Office star John Krasinski. In 2010, she appeared in Grown Ups starring Adam Sandler, where she played the wife of Chris Rock's character. In 2011, she appeared in Bridesmaids with Saturday Night Live colleague Kristen Wiig, and in 2013 she played a supporting role in The Way, Way Back as the girlfriend of Sam Rockwell's character. She co-starred in the NBC sitcom Up All Night, with Christina Applegate and Will Arnett.