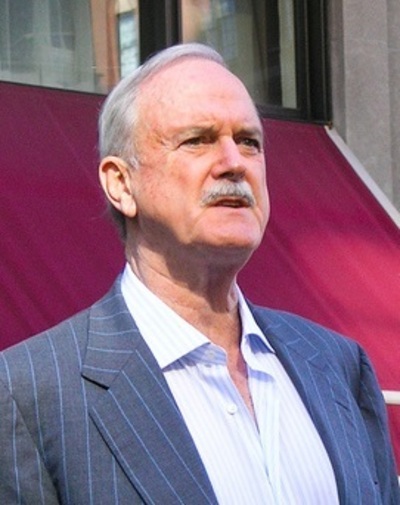 John Marwood Cleese (born 27 October 1939) is an English actor, comedian, writer and film producer. He achieved success at the Edinburgh Festival Fringe and as a scriptwriter and performer on The Frost Report. In the late 1960s, he became a member of Monty Python, the comedy troupe responsible for the sketch show Monty Python's Flying Circus and the four Monty Python films:And Now for Something Completely Different, Monty Python and the Holy Grail, Life of Brian and The Meaning of Life.

In the mid-1970s, Cleese and his first wife, Connie Booth, co-wrote and starred in the British sitcom Fawlty Towers. Later, he co-starred with Kevin Kline, Jamie Lee Curtis and former Python colleague Michael Palin in A Fish Called Wanda and Fierce Creatures. He also starred in Clockwise, and has appeared in many other films, including two James Bond films, two Harry Potter films, and the last three Shrek films.

Cleese was born in Weston-super-Mare, Somerset, England, the only child of Reginald Francis Cleese, an insurance salesman, and his wife Muriel Evelyn (née Cross). His family's surname was originally Cheese, but his father had thought it was embarrassing and changed it when he enlisted in the Army during World War I.

Cleese was educated at St Peter's Preparatory School, where he received a prize for English studies and did well at cricket and boxing. When he was 13, he received an exhibition to Clifton College, an English public school in Bristol. He was already more than 6 feet tall by then. He allegedly defaced the school grounds for a prank by painting footprints to suggest that the statue of Field Marshal Earl Haighad got down from his plinth and gone to the toilet. Cleese played cricket for the First XI team and did well academically, passing 8 O-Levels and 3 A-Levels in mathematics, physics, and chemistry. His pranks finally led to him being expelled.

He then returned to his prep school and taught science, English, geography, history and Latin (he drew on his Latin teaching experience later for a scene in Life of Brian, in which he corrects Brian's badly written Latin graffiti) before taking up a place he had won at Downing College, Cambridge University, where he read Law and joined the Cambridge Footlights.

Cleese graduated from Cambridge in 1963 with a 2:1. Despite his successes on The Frost Report, his father would send him cuttings from the Daily Telegraph offering management jobs in places like Marks and Spencer.

Cleese met Connie Booth in the US during the late 1960s and the couple married in 1968. In 1971, Booth gave birth to Cynthia Cleese, their only child. With Booth, Cleese wrote the scripts for and co-starred in both series of the TV series Fawlty Towers, even though the two were actually divorced before the second series was finished and aired. Cleese and Booth are said to have remained close friends since.

Cleese married American actress Barbara Trentham in 1981. Their daughter Camilla, Cleese's second child, was born in 1984. He and Trentham divorced in 1990. During this time, Cleese moved from the United Kingdom to Los Angeles.

On 28 December 1992, he married American psychotherapist Alyce Faye Eichelberger. In January 2008 the couple announced they had split. The divorce was settled in December 2008. The divorce settlement left Eichelberger with £12 million in finance and assets, including £600,000 a year for seven years. Cleese stated that "What I find so unfair is that if we both died today, her children would get much more than mine".

In April 2010, Cleese revealed on The Graham Norton Show on BBC One that he had started a new relationship with a woman 31 years his junior, Jennifer Wade. They married on the island of Mustique on 2 August 2012.