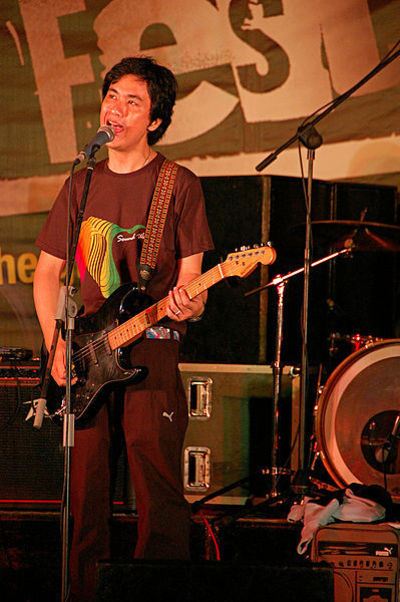 Eleandre Basiño Buendia (born 2 November 1970), popularly known as Ely Buendia, is a Filipino musician, writer and director who gained fame as guitarist, songwriter and lead vocalist of the popular Pinoy rock band Eraserheads. His compositions gained success and critical acclaim, topping various music charts, and are now considered classics. Widely regarded as one of the most respected music icons in the country, he currently performs as guitarist and lead vocalist for Pupil.

Born in Naga City, Buendia first learned Kundiman from his mother while he started playing the guitar at the age of 7 years old. Buendia graduated from Elementary in Pasig Catholic College in 1983 in Pasig City and High School in University of Perpetual Help Rizal. During Elementary, Buendia won in a singing contest where he sang "Doon Lang" by Nonoy Zuniga. Buendia later enrolled to University of the Philippines Diliman where he formed his bands Bluidie Tryste, Sunday School and Eraserheads.

In December 1989, Ely Buendia, Raimund Marasigan, Marcus Adoro and Buddy Zabala formed the band Eraserheads in their collegiate school, the University of the Philippines, Diliman, where Buendia was a Film major at the College of Mass Communications (he started his first year of college in 1987). The band found that they weren't good at covering other people's hits, so they concentrated on writing their own material instead. "After all, if we committed a mistake no one would recognize it since they don't know the song, right?," Buendia explained. Performing their original songs live soon earned them a cult following in the University, which gradually spread outside the campus. One of the songs, a pop song entitled "Pare Ko", which Buendia wrote, became very popular, partly because of the lyrics which included a few swear words.

Eraserheads eventually signed a three-year deal with BMG Pilipinas. Their debut album, "UltraElectroMagneticPop!" featured no less than Pare Ko and a host of other novelty pieces that had people listening and discovering more about the quartet. The album also brought the underground college rock scene into public awareness. 1993 saw the emergence of "Eraserheadsmania" because of successive hit singles, sold-out concerts and thousands of fans.

Buendia continued to write songs for the band, many of which became hit singles and classics. Eraserheads' lasted for ten years before finally breaking up with Buendia and Adoro's departure. During those 10 years, the band produced eight studio albums along with other EPs and singles. Their gigs took them out of the country, with tours in the U.S. and other countries. One album, "Aloha Milkyway, was released in the Asian region. Eraserheads were also the first ever Filipino artists to receive the "Moon Man" trophy for winning the 1997 MTV Asia Viewer's Choice Award for the video of their song, "Ang Huling El Bimbo." This hit was also written by Buendia, like many others that the band produced.

After weeks of speculation, it was confirmed that Buendia had left the band in mid-March 2002 for "reasons unknown." However, in subsequent interviews, Buendia pointed to business matters as the cause of the band's break-up.

In an interview, Marasigan said he was eating in SM Megamall, a local shopping mall, when he heard of the news (how he heard of it, was not clear). He said he was "semi-surprised" and wondered if Zabala already knew about it. Adoro told of the story now famous among Eraserheads fans about Buendia's cryptic text message. He said Buendia stated in the text message that it's already time to graduate. Adoro quipped in the same interview that Buendia being the first to graduate was natural, since he was in batch '87 in their school (UP, Diliman), while they were in Batch '88.

Zabala confesses in an interview that disbanding had not been that far away from the members' minds. He said that there were so many occasions where they could have disbanded but they did not. Adoro expressed the belief of some people that the band was getting too old and that it was "selfish" for the band to continue, likely referring to comments about how it's time for other bands besides Eraserheads to shine. The band made it clear, though, that Buendia's departure from the band wasn't in any way violent and there was no shouting (sigawan) or any confrontation.

Without giving up, the three remaining original Eraserheads decided to continue on. Within just a few weeks, the "new" Eheads debuted at Hard Rock Cafe in Makati City on April 19 featuring a female singer-guitarist, Kris Gorra-Dancel from the band, Fatal Posporos. However after a few months, Adoro also quit the band. The remaining members of Eraserheads added Diego Mapa and Ebe Dancel to their lineup and renamed their band, "Cambio."

Buendia is a member of the international Order of DeMolay from A. Mabini Chapter, Paranaque City.