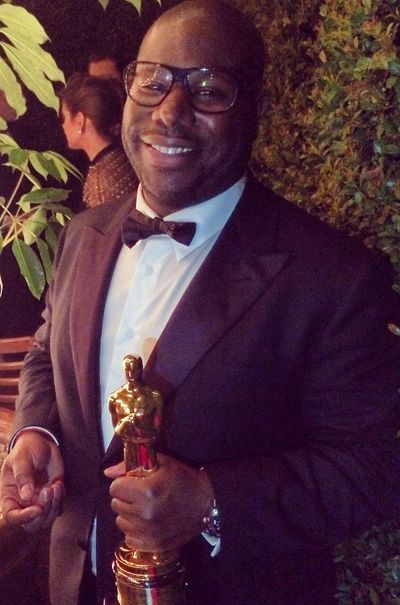 Steven Rodney McQueen CBE (born 9 October 1969) is a British film director and screenwriter. For his 2013 film, 12 Years a Slave, a historical drama adaptation of an 1853 slave narrative memoir, he won an Academy Award, BAFTA Award for Best Film, and Golden Globe Award for Best Motion Picture – Drama, as a producer, and he also received the award for Best Director from the New York Film Critics Circle. McQueen is the first black filmmaker to win an Academy Award for Best Picture. McQueen frequently collaborates with actor Michael Fassbender, who has starred in three of McQueen's feature films. McQueen's other feature films are Hunger (2008), a historical drama about the 1981 Irish hunger strike, Shame (2011), a drama about an executive struggling with sex addiction, and Widows (2018), a thriller about a group of women who vow to finish the heist their husbands died attempting.

For his artwork, McQueen has received the Turner Prize, the highest award given to a British visual artist. In 2006 he produced Queen and Country, which commemorates the deaths of British soldiers in Iraq by presenting their portraits as a sheet of stamps. For services to the visual arts, he was appointed Commander of the Order of the British Empire in 2011.

In April 2014, TIME magazine included McQueen in its annual TIME 100 as one of the "Most Influential People in the World." In October 2016, McQueen was granted the British Film Institute's highest honour, the BFI Fellowship.

McQueen was born in London and is of Grenadian and Trinidadian descent. He grew up in Hanwell, West London and went to Drayton Manor High School. In a 2014 interview, McQueen stated that he had a very bad experience in school, where he had been placed into a class for students believed best suited "for manual labour, more plumbers and builders, stuff like that." Later, the new head of the school would admit that there had been "institutional" racism at the time. McQueen added that he was dyslexic and had to wear an eyepatch because of a lazy eye, and reflected this may be why he was "put to one side very quickly".

He was a keen football player, turning out for the St. George's Colts football team. He took A level art at Ealing, Hammersmith and West London College, then studied art and design at Chelsea College of Arts and then fine art at Goldsmiths College, University of London, where he first became interested in film. He left Goldsmiths and studied briefly at New York University's Tisch School of the Arts in the United States. He found the approach there too stifling and insufficiently experimental, complaining that "they wouldn't let you throw the camera up in the air". His artistic influences include Andy Warhol, Sergei Eisenstein, Dziga Vertov, Jean Vigo, Buster Keaton, Carl Theodor Dreyer, Robert Bresson, and Billy Wilder.

Five Easy Pieces (1995) is a short film by McQueen. It follows a woman across a tight-rope; McQueen has stated that he finds a tight-rope walker to be "the perfect image of a combination of vulnerability and strength."

Just Above My Head (1996) is a short film which shares close ties with McQueen's preceding film with the key theme of walking. A man – played by McQueen – is shot in a way so as to crop out his body, but his head appears small at the bottom of the image, rising and falling with his step and coming in and out of frame according to the movement of the camera. As stated by David Frankel, the "simultaneous fragility and persistence" is seemingly meant as a metaphor for black life in England as elsewhere.

Deadpan (1997) is a four-minute black and white short film directed by and starring McQueen showing a multitude of angles on a reenactment of a stunt from Buster Keaton's Steamboat Bill, Jr.. Frieze Magazine noted his lack of shoelaces and inferred a multitude of depth and commentary on the prison system. Media Art noted that his use of black and white emulates 1920s film style without "a historicizing strategy or to reinterpret the origins of moving images." The film was exhibited on loop in the Museum of Modern Art's Contemporary Galleries, 1980-Now from 17 November 2011 to 17 February 2014.

Exodus (1997) is a 65-second colour video that takes the title of a record by Bob Marley as its starting point. It records a found event, two black men carrying potted palms whom McQueen followed down a London street, the greenery waving precariously above their heads. Then they get on a bus and leave.

Western Deep (2002), commissioned for documenta 11, constitutes a powerful exploration of the sensory experience of the TauTona Gold Mine in South Africa, showing migrant labourers working in dark, claustrophobic environments and the ear-splitting noise of drilling.

Running Thunder (2007), an 11-minute short film of a dead horse in a meadow. It was bought by the Stedelijk Museum in Amsterdam in 2014

McQueen's films as an artist were typically projected onto one or more walls of an enclosed space in an art gallery, and often in black-and-white and minimalistic. He has cited the influence of the nouvelle vague and the films of Andy Warhol. He often appeared in the films himself.

His first major work was Bear (1993), in which two naked men (one of them McQueen) exchange a series of glances that might be taken to be flirtatious or threatening. Deadpan (1997) is a restaging of a Buster Keaton stunt in which a house collapses around McQueen, who is left unscathed because he is standing where there is a missing window.

As well as being in black-and-white, both these films are silent. The first of McQueen's films to use sound was also the first to use multiple images: Drumroll (1998). This was made with three cameras, two mounted to the sides, and one to the front of an oil drum which McQueen rolled through the streets of Manhattan. The resulting films are projected on three walls of an enclosed space. McQueen has also made sculptures such as White Elephant (1998), as well as photographs.

He won the Turner Prize in 1999, although much of the publicity went to Tracey Emin, who was also a nominee. In 2006, he went to Iraq as an official war artist. The following year he presented Queen and Country, a piece that commemorated the deaths of British soldiers who died in the Iraq War by presenting their portraits as sheets of stamps. A proposal to have the stamps placed in circulation was rejected by the Royal Mail. His 2007 short film Gravesend depicted the process of Coltan refinement and production. It premiered at The Renaissance Society in the United States.

His 2008 feature film Hunger, about the 1981 Irish hunger strike, premiered at the 2008 Cannes Film Festival. McQueen received the Caméra d'Or (first-time director) Award at Cannes, the first British director to win the award. The film was also awarded the inaugural Sydney Film Festival Prize, for "its controlled clarity of vision, its extraordinary detail and bravery, the dedication of its cast and the power and resonance of its humanity". The film also won the 2008 Diesel Discovery Award at the Toronto International Film Festival. The award is voted on by the press attending the festival. Hunger also won the Los Angeles Film Critics Association award for a New Generation film in 2008 and the best film prize at the London Evening Standard Film Awards in 2009.

McQueen represented Britain at the 2009 Venice Biennale. In 2009, it was announced that McQueen has been tapped to direct Fela, a biopic about the Nigerian musician and activist Fela Kuti. Despite this, McQueen's second major theatrical release came in 2011 with the film Shame. Set in New York City, it stars Michael Fassbender as a sex addict whose life is suddenly turned upside-down when his estranged sister (Carey Mulligan) reappears.

McQueen's next film was 12 Years a Slave (2013). Based on the 1853 autobiography of the same name by Solomon Northup, the film tells the story of a free black man who is kidnapped in 1841 and sold into slavery, working on plantations in the state of Louisiana for twelve years before being released. The film won the Academy Award for Best Picture in March 2014, becoming the first Best Picture winner to have a black director or producer.

McQueen signed on to develop Codes of Conduct, a six-episode limited series for HBO. However, after the pilot episode was shot, HBO shut down production. McQueen is working on a BBC drama about the lives of black Britons, which follows the lives of a group of friends and their families from 1968 to 2014.

Steve McQueen shot the video for Kanye West's single "All Day". The film was screened at Fondation Louis Vuitton in Paris on 7 March 2015 before the first concert of a four-night residency by the American artist, at the Frank Gehry-designed building, began. The film subsequently received its American premiere at the Los Angeles County Museum of Art in July 2015.

In 2018, McQueen directed Widows, a thriller film he co-wrote with Gone Girl writer Gillian Flynn. Viola Davis starred in the film, which is based on the 1983 British TV series of the same name, and is a heist thriller about four armed robbers who are killed in a failed heist attempt, only to have their widows step up to finish the job.

McQueen is a former fan of English football club Tottenham Hotspur, quitting after admitting that it affected his day too much.