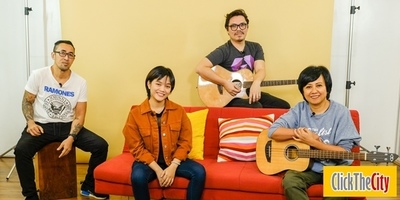 Imago was formed in 1997 With Aia de Leon on vocals and rhythm guitar, Tim Cacho on lead guitar, Arvin Gatmaitan on bass and back up vocals, Zach Lucero on drums and London-born Michelle Pritchard on violin. After their tribal-sounding track entitled "Rainsong" spent considerable time being played on NU107's In The Raw, a program for independent bands in the country, it eventually graduated into the station's mainstream playlist. They were then signed a recording contract with Viva Records and were able to record their debut album entitled, Probably Not But Most Definitely under the helm of producer/musician Bob Aves and Grace Nono. The album was released in 2001 and included 19 tracks which included their pre-album songs like "Rainsong" and "Alay" as well as an electronica remix of "Rainsong" by friend and musician (former Eraserheads drummer) Raimund Marasigan under the Squid 9 nom de musique. The album was highly regarded by the alternative industry for their courage to take on a Celtic/World Music feel in their music rather than the rap-growl (fondly known as "Hupaw" by most music critics) scene that was growing at the time, as well as the poetic approach to their lyrics.

The band has picked up a handful of Katha and NU107 Rock Awards (Best Female Award for Aia De Leon and Best Music Video for "Akap") from the first cd. All this while maintaining a consistent public presence around Metro Manila, playing in various venues with other bands in the lineup as well as part of various production events such as Admit One and Sunday Grabe Sunday. During this time, Aia also joined the all-girl alt-pop band Fatal Posporos, as a bassist, replacing their original member Annette Ortiz who left for the United States and now a member of the newly reformed Filipino band, Prettier than Pink.

Around this time period, bassist Arvin Gatmaitan and violinist Michelle Pritchard parted ways with the band. Arvin played with progressive metal band Eternal Now and is currently pursuing a business career. Michelle followed her other passion, race car driving and became a regular competitor in the Philippine motorsports scene. Michelle was also hosting the NBC TV show, Auto Review and was associate editor for C! Magazine. Michelle was briefly married to Wolfgang drummer, Wolf Gemora and has now returned to her London roots and is now married to Irish-born Kevin Byrne with whom she has two young boys. Michelle's signature Celtic-influenced violin strokes were missed by many early fans as Imago's sound morphed into mainstream pop shortly after Myrene Academia, former NU107 DJ and Sandwich bassist joined the band.

Imago’s second album was released 2 years after, though they had been playing most of their new material during gigs. Recorded in 2003, the CD's release was delayed by unexpected record label setbacks and was thus aptly titled Take 2 which was clearly a reflection of the band's second attempt in releasing an album. The material is relatively heavier compared to the first album, trading in the ethereal cum New Age sensibilities with a modern pop rock flavor, even incorporating rap along with the staccato-type of singing they had been known for. Released independently, Take 2 featured hit songs such as Akap and Anino. Take 2 produced the new sound and gave the band a wider audience, having been played in some mainstream CHR (Current Hit Radio) format stations. "Taning" was also included in the soundtrack to the Peque Gallaga comeback experimental film, Pinoy Blonde.

In 2006, Imago released their third album, "Blush" under Universal Records with "Taralets" as the lead single which was one of the certified hits of 2006 in the radio and music video channels. The song was also used as a theme song for the movie "Pitong Dalagita" and as a campaign jingle for a Philippine senatorial candidate. In the same year, they recorded a revival of Ewan, which was originally sung by the APO Hiking Society. In 2007, they earned a nomination for Favorite Artist in the 2007 MYX Music Awards. They also released their second single of their "Blush" album, "Sundo". The music video was directed by Marie Jamora which was also the director for their previous videos, Akap and Taralets.

After the success of the third single Walang Misteryo, their fourth single, entitled "Under Repair" was recently released. The video of the latest single features the band impersonating ABBA.

"Blush" has also been certified Gold Record last January 2008, shortly after the release of the album's Special Edition CD.

Last March 2008, the band was invited to be one of the many other artists from all over the world to perform in the annual Mosaic Music Festival in Singapore. Lead vocalist Aia de Leon, also shared vocal duties with Broken Social Scene's Kevin Drew during his band's opening number at the same event.

In 2010, Imago released its fourth album entitled "Effect Desired None" with "Huling Yakap Ng Mundo" as the lead single.

In April 2013, lead vocalist Aia de Leon left the band. On September 13, it was announced that Mayumi Gomez would be the band's new lead vocalist.

On June 25, 2014, Imago release its Kapit album. With 8 tracks on the album, Imago fans recognized the familiar sound of the group they were accustomed to. The album is produced by no less than Raimund Marasigan of Sandwich and Eraserheads fame.

The beginning of 2019 brought about the departure of Mayumi from Imago due to her move to the US to focus on her new life as a wife. Kiara San Luis takes over the front man duties.