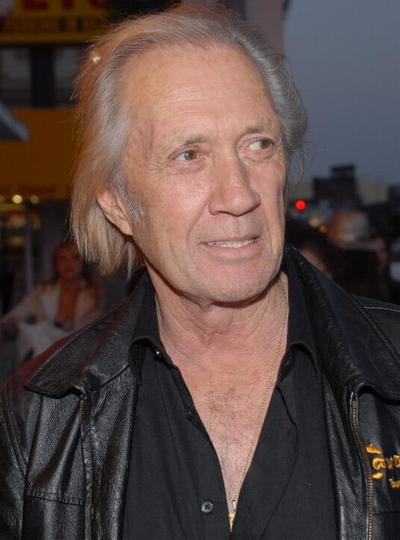 David Carradine (born John Arthur Carradine; December 8, 1936 – June 3, 2009) was an American actor and martial artist, best known for his leading role as a warrior monk, Kwai Chang Caine, in the 1970s television series Kung Fu. He was a member of a productive acting family that began with his father, John Carradine. His acting career, which included major and minor roles on stage, television and cinema, spanned over four decades. A prolific "B" movie actor, he appeared in more than 100 feature films and was nominated four times for a Golden Globe Award. The last nomination was for his title role in Quentin Tarantino's Kill Bill.

Films that featured Carradine continued to be released after his death. These posthumous credits were from a variety of genres including horror, action, western, martial arts, drama, science fiction and documentary. In addition to his acting career, Carradine was also a musician and pursued a directing career. Influenced by his most popular acting role, he studied martial arts. The son of a frequently married actor, he had an unstable childhood. This instability would continue throughout his life as he himself was married five times. He was also frequently arrested and prosecuted for a variety of offenses which often involved substance abuse. He died on June 3, 2009, apparently of auto-erotic asphyxiation.

He was born John Arthur Carradine in Hollywood, California, oldest child of actor John Carradine and his wife Ardanelle McCool. He was a half-brother of Keith, Christopher, and Robert Carradine, and an uncle of Ever Carradine and Martha Plimpton. He was a great-grandson of Methodist evangelical author Beverly Carradine and a grandnephew of artist Will Foster.

Called Jack by his family, Carradine's childhood was turbulent. His parents divorced and repeatedly re-married. He was born to his mother's second marriage of three, and his father's first of four. At the time of their marriage, his mother already had a son by her first husband, whom John adopted. John Carradine planned a large family, but after his wife had a series of miscarriages, he discovered she had had numerous illegal abortions without his knowledge. This rendered her unable to carry a baby to full term. Against this backdrop of marital discord, Jack almost succeeded in committing suicide by hanging at the age of 5. He said that the incident followed his discovery that he and Bruce had different biological fathers. He added that, "My father saved me, and then confiscated my comic book collection and burned it – which was scarcely the point".

After three years of marriage, Ardenelle Carradine filed for divorce from John, but the couple remained married for another five years. Divorce finally came in 1944, when Jack was seven years old. His father left California to avoid court action in the alimony settlement. After the couple engaged in a series of court battles over child custody and alimony, which at one point landed John in jail, Jack joined his father in New York City. By this time his father had remarried. For the next few years Jack was shuffled between boarding schools, foster homes and reform school. He also would often accompany his father while the elder Carradine performed summer theater throughout the Northeast. He spent time in Massachusetts and even one miserable winter milking cows on a farm in Vermont.

Eventually, Jack Carradine returned to California where he graduated from Oakland High School. He attended Oakland Junior College (currently Laney College) for a year before transferring to San Francisco State College where he studied drama and music theory. There he wrote music for the drama department's annual revues while juggling work at menial jobs, a fledgling stage acting career and his studies. After he dropped out of college, Carradine spent some time with the "beatniks" of San Francisco's North Beach and Venice, California. During this time he collected unemployment insurance and sold baby pictures. He was also prosecuted for disturbing the peace.

Despite an attempt to dodge the draft, in 1960 Carradine was inducted into the United States Army, where he drew pictures for training aids. That Christmas he married his high school sweetheart, Donna Lee Becht. While stationed at Fort Eustis, Virginia he helped to establish a theater company which became known as the "entertainment unit". He met fellow inductee, Larry Cohen, who later cast him in Q, The Winged Serpent. He also faced court-martial for shoplifting. In 1962, Donna gave birth to their daughter, Calista. Carradine was honorably discharged after a two-year tour.

Upon leaving the Army, Carradine became serious about his acting pursuits. It was at that time that he was advised to change his name to avoid confusion with his famous father. In 1963, he made his television debut on an episode of Armstrong Circle Theatre. Several other television roles were to follow including appearances on Bob Hope Presents the Chrysler Theatre, and The Alfred Hitchcock Hour. He made his feature film debut in 1964 in Taggart, a western based on a novel by Louis L'Amour.

His first "big break", however, came with his second Broadway part in The Royal Hunt of the Sun, a play by Peter Shaffer about the destruction of the Inca empire by conquistador Francisco Pizarro. He said of this performance, "Many of the important roles that I got later on were because the guy who was going to hire me was in that audience and had his mind blown." For that part, Carradine won a Theatre World Award for Best Debut Performance in 1965.

For three seasons, David Carradine starred as a half-Chinese, half-Caucasian Shaolin monk, Kwai Chang Caine, on the ABC hit TV series Kung Fu (1972–1975) and was nominated for an Emmy and a Golden Globe Award for the role. The show, which took place in the Old West, helped to popularize the martial arts and Eastern philosophy in the west and immortalized the character of Kwai Chang Caine, also referred to as "Grasshopper", in popular culture.

Although the choice of a Caucasian to play the role of Kwai Chang Caine stirred controversy, the show served as steady employment for several Asian-American actors in the U.S. In addition to Keye Luke and Philip Ahn, who held leading roles in the cast as Caine's Shaolin masters, Robert Ito, James Hong, Benson Fong, Richard Loo, and Victor Sen Yung frequently appeared in the series. Kung Fu ended when Carradine quit to pursue a movie career, but he reprised the role of Kwai Chang Caine in 1986 in Kung Fu: The Movie. Brandon Lee, son of Bruce Lee, in his acting debut, portrayed his son.

Carradine knew nothing of the practice of kung fu at the time he was cast in the role of Kwai Chang Caine, instead he relied on his experience as a dancer for the part. He also had experience in sword fighting, boxing, and street fighting on which to draw. For the first half of the original series, David Chow provided technical assistance with kung fu. Later, Kam Yuen provided the expertise. It was not until after the series was canceled that Carradine began to study martial arts, first from Yuen and eventually from Rob Moses, a student of Yuen's. He never considered himself a master of the art, but rather an "evangelist" of kung fu. By 2003 he had acquired enough expertise in martial arts to produce and star in several instructional videos on T'ai chi and Qigong. In 2005, Carradine visited the Shaolin Monastery in Henan, China as part of the extra features for the third season of the Kung Fu DVDs. During his visit, the abbot, Shi Yǒngxìn, said that he recognized Carradine's important contribution to the promotion of the Shaolin Monastery and kung fu culture, to which Carradine replied, "I am happy to serve."

Shortly after being drafted into the Army in 1960, David Carradine proposed marriage to Donna Lee Becht (born September 26, 1937), who he had met while they were students at Oakland High School. They were married on Christmas Day that year. She lived with him off-base in Virginia while he was stationed at Fort Eustis. In April 1962, she gave birth to their daughter Calista. After his discharge, they lived in New York while David established his acting career, appearing on Broadway in The Deputy and Royal Hunt of the Sun. The marriage dissolved in 1968, whereupon Carradine left New York and headed back to California to continue his television and film careers.

In 1969, he met actress Barbara Hershey while the two of them were working on Heaven with a Gun. The pair lived together until 1975. They appeared in other films together, including Martin Scorsese's Boxcar Bertha. In 1972, they appeared in a nude Playboy spread, recreating some sex scenes from Boxcar Bertha. That year Hershey gave birth to their son, Free (who later changed his name to Tom, much to his father's chagrin). The relationship fell apart around the time of his 1974 burglary arrest, when Carradine began an affair with Season Hubley, who had guest-starred on Kung Fu. David was engaged to Hubley for a time, but they never married.

In February 1977, Carradine married his second wife, Linda, (née Linda Anne Gilbert, born March 16, 1950) the former wife of The Byrds lead guitarist, Roger McGuinn, in a civil ceremony, in Munich, Germany, immediately following the filming of The Serpent's Egg. Their daughter Kansas was born April 19, 1978. This marriage ended in divorce, as did the two that followed. He was married to Gail Jensen from 1988–1997. She died in April, 2010, at the age of 60, of an alcohol-related illness. He was also married to Marina Anderson from 1998–2001. By this time, Carradine had proclaimed himself to be a "serial monogamist".

On June 4, 2009, David Carradine was found dead in his room at the Swissôtel Nai Lert Park Hotel on Wireless Road, near Sukhumvit Road, in central Bangkok, Thailand. He was in Bangkok to shoot his latest film, entitled Stretch. A police official said that Carradine was found hanging by a rope naked in the room's closet, causing immediate speculation that his death was suicide. However, reported evidence suggested that his death was the result of autoerotic asphyxiation. Two autopsies were conducted and concluded that the death was not a suicide. The cause of death became widely accepted as "accidental asphyxiation".

Immediately following his death, two of his former wives, Gail Jensen and Marina Anderson, stated publicly that his sexual interests included the practice of self-bondage. Anderson, who had plans to publish a tell-all book about her marriage to Carradine, said in an interview with Access Hollywood, "There was a dark side to David, there was a very intense side to David. People around him know that." Previously in her divorce filing she had claimed that "it was the continuation of abhorrent and deviant sexual behavior which was potentially deadly."