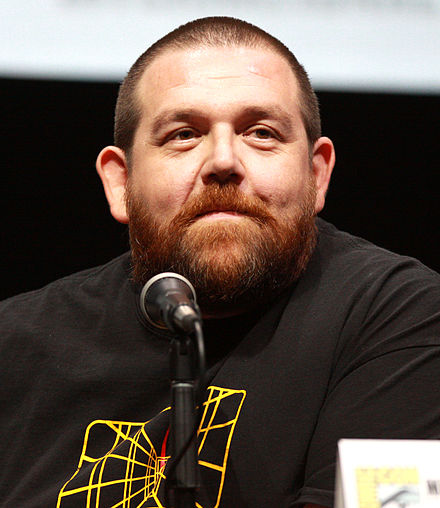 Nicholas John "Nick" Frost (born 28 March 1972) is a British actor, comedian, screenwriter, producer and author. He is best known for his work in the Three Flavours Cornetto trilogy of films, consisting of Shaun of the Dead (2004), Hot Fuzz (2007), and The World's End (2013), and the television comedy Spaced (1999–2001). He also appeared in Joe Cornish's film Attack the Block (2011). He co-starred in the 2011 film Paul, which he co-wrote with frequent collaborator and friend Simon Pegg. He is also well known for his various roles in the sketch show Man Stroke Woman. He starred in Mr. Sloane as the title character, Jeremy Sloane.

Frost was born in Dagenham, Essex, the son of office furniture designers. When he was ten his sister died of an asthma attack aged 18. He attended Beal High School in Ilford. When Frost was 15 his parents' business failed and they lost the family home. They moved in with neighbours where he witnessed his mother having a stroke due to the stress. Frost left school and took a job with a shipping company to support the family. He subsequently spent two years at a kibbutz in Israel. He met actor Simon Pegg while working as a waiter at a North London Mexican restaurant and the two became close friends and flatmates. Pegg and Jessica Hynes wrote a role for Frost in the cult slacker comedy series Spaced that was partly based on Pegg and Frost's lifestyle at the time.

He appeared in corporate training video clips such as Chris Carter and the Coverplan Challenge, a Dixons sales video, before gaining fame as Tim's army-obsessed best friend Mike in Spaced (1999–2001), which aired on Channel 4 for two series. In 2001, Frost played a small role in a one-off episode of Victoria Wood's Acorn Antiques. This was a specially written episode shown during the series called "The Sketch Show Story" that Victoria narrated, in which Frost played an armed robber who shot dead Acorn Antiques' most lovable character, Mrs Overall.

In 2002, Frost wrote and presented the show Danger! 50,000 Volts!, a spoof of the outdoors survival genre in which SAS experts or the like demonstrated how to improvise solutions to dangerous problems. In the same year, Frost co-wrote and starred in The Sofa of Time with Matt King. In 2004, he appeared in Shaun of the Dead, a "romantic zombie comedy", written by Simon Pegg and Spaced director Edgar Wright. In late 2005, Frost starred in the comedy sketch show Man Stroke Woman on BBC Three. A second series of Man Stroke Woman aired on BBC Three in early 2007. In early 2006, Frost played Commander Henderson in two series of the BBC Two science fiction sitcom, Hyperdrive. Also in 2006, he acted in Kinky Boots. Frost had a small appearance in the British comedy Look Around You, a parody of 1970s/1980s technology parodying the format of shows like Tomorrow's World.

Frost and Pegg appeared in a second Pegg-Wright feature film called Hot Fuzz, an action and cop genre homage, set in Gloucestershire. Frost plays bumbling Constable Danny Butterman, who partners up with Pegg's dynamic Nicholas Angel after the latter is transferred from the Metropolitan Police in London. The pair teamed up again for their self-penned 2011 science-fiction comedy film Paul, whose storyline concerned a fugitive alien. The two also starred in Steven Spielberg's The Adventures of Tintin: Secret of the Unicorn as Thomson and Thompson. Frost narrates the Channel 4 reality show Supernanny. He has made fleeting appearances in the Channel 4 surreal medical comedy series Green Wing as "just a man" in pub scenes (when Boyce asks who he is, he responds, "just a man"). In 2013, Frost played the role of Andy Knightley in the third Pegg-Wright feature film called The World's End.

Frost is good friends with fellow actor Simon Pegg and the two have appeared alongside each other in several films. In a 2005 interview, Frost stated that he was brought up as a Catholic but is now an atheist along with Simon Pegg. He is a supporter of West Ham United, as well as being a rugby player, formerly playing for Barking RFC.

Frost lived with his half-Swedish wife, production executive Christina, in St Margarets, London. They married in 2008. He previously lived in Finsbury Park, which was also the filming location for Shaun of the Dead. On 22 June 2011, Christina gave birth to the couple's son. They separated in 2013, and are now divorced.

In October 2015, Frost released a memoir titled Truths, Half Truths & Little White Lies (Hodder & Stoughton), detailing his life up to the age of 30.