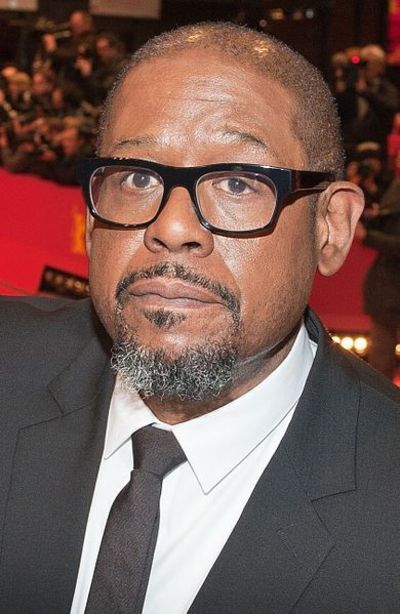 He has earned a reputation for intensive character study work for films such as Lee Daniels' The Butler, Bird and Ghost Dog: The Way of the Samurai, for his work in direct-to-video films and for his recurring role as LAPD Internal Affairs Lieutenant Jon Kavanaugh on the award-winning television series The Shield.

Whitaker won an Academy Award, a Golden Globe and a BAFTA for his performance as Ugandan dictator Idi Amin in the 2006 film The Last King of Scotland.

Whitaker was born in Longview, Texas, and his family moved to Los Angeles, California when he was four. His father, Forest Whitaker, Jr., was an insurance salesman and the son of novelist Forest Whitaker, Sr. His mother, Laura Francis (née Smith), was a special education teacher who put herself through college and earned two Masters degrees while raising her children. Whitaker has two younger brothers, Kenn and Damon, and an older sister, Deborah.

His first role as an actor was the lead in Dylan Thomas' play, Under Milk Wood.

Whitaker then attended Cal Poly Pomona on a football scholarship, but due to a debilitating back injury, he changed his major to music (voice). He toured England with the Cal Poly Chamber Singers in 1980. While still at Cal Poly, he briefly changed his major to drama. He was accepted to the Music Conservatory at the University of Southern California to study opera as a tenor, and subsequently was accepted into the University's Drama Conservatory. He graduated from USC in 1982. He also earned a scholarship to the Berkeley, California branch of the Drama Studio London. Whitaker also is pursuing a degree in The Core of Conflict: Studies in Peace and Reconciliation at New York University's Gallatin School of Individualized Study.

Whitaker has a long history of working with well-regarded film directors and fellow actors, as well as working in direct-to-video films alongside novice actors such as Lil Wayne, Maggie Grace and 50 Cent. In his first solo onscreen performance of note, he had a small role playing a high school football player in the 1982 film version of Cameron Crowe's coming-of-age teen-retrospective, Fast Times at Ridgemont High. He co-starred and interacted alongside Judge Reinhold, Phoebe Cates, Sean Penn and Robert Romanus. In 1986, he appeared in Martin Scorsese's film, The Color of Money (with Paul Newman and Tom Cruise), and in Oliver Stone's Platoon. The following year, he co-starred with Robin Williams in the comedy Good Morning, Vietnam.

In 1988, Whitaker played in the film Bloodsport alongside Jean-Claude Van Damme and he had his first lead role starring as musician Charlie Parker in the Clint Eastwood-directed film, Bird. To prepare himself for the part, he sequestered himself in a loft with only a bed, couch, and saxophone, having also conducted extensive research and taken alto sax lessons. His performance, which has been called "transcendent," earned him the Best Actor award at the 1988 Cannes Film Festival and a Golden Globe nomination. Whitaker continued to work with a number of well-known directors throughout the 1990s. He starred in the 1990 film Downtown with Anthony Edwards and Penelope Ann Miller. Neil Jordan cast him in the pivotal role of "Jody", a captive British soldier in his 1992 film, The Crying Game where Whitaker used an English accent. Todd McCarthy, of Variety, described Whitaker's performance as "big-hearted," "hugely emotional," and "simply terrific."

Whitaker's 2006 portrayal of Idi Amin in the film, The Last King of Scotland earned him positive reviews by critics as well as multiple awards and honors. To portray the dictator, Whitaker gained 50 pounds, learned to play the accordion, and immersed himself in research. He read books about Amin, watched news and documentary footage featuring Amin, and spent time in Uganda meeting with Amin's friends, relatives, generals, and victims; he also learned Swahili and mastered Amin's East African accent. His performance earned him the 2007 Academy Award for Best Actor in a Leading Role, making him the fourth African-American actor in history to do so, joining the ranks of Sidney Poitier, Denzel Washington, and Jamie Foxx. For that same role, he was also recognized with a Golden Globe, Screen Actors Guild Award, BAFTA Award, and accolades from the New York Film Critics Circle, the Los Angeles Film Critics Association, the National Board of Review, and the Broadcast Film Critics Association among others.

In 1996, Whitaker married actress Keisha Nash, whom he met on the set of Blown Away. The Whitakers have four children: two daughters together (Sonnet and True), and his son (Ocean) and her daughter (Autumn) from previous relationships. On Inside the Actors Studio, Whitaker said that a genetic test indicated he was of Igbo descent on his father's side, and Akan descent on his mother's side.

Whitaker studies yoga and has a black belt in kenpō. He also trains in the Filipino martial art of Kali, under Dan Inosanto.