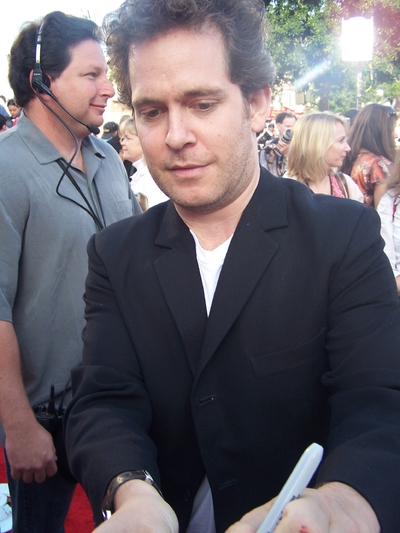 Thomas Anthony "Tom" Hollander (born 25 August 1967) is an English actor who has appeared in the films Enigma, Gosford Park, Cambridge Spies, Pride & Prejudice, Pirates of the Caribbean, In the Loop, Valkyrie and Hanna.

Tom Hollander was born in Bristol and brought up in Oxford, the son of teachers. His father is descended from Czech Jews who converted to Catholicism, and his mother is of English background. He attended the Dragon School and then Abingdon School where he was chief chorister.

As a youngster, Hollander was a member of the National Youth Theatre and the National Youth Music Theatre (then known as the Children's Music Theatre). In 1981, at fourteen years of age, he was awarded the lead role in a BBC dramatisation of Leon Garfield's John Diamond. He read English at Selwyn College, Cambridge. He was actively involved in stage productions as a member of the Footlights and president of the Marlowe Society. Friend and fellow student Sam Mendes directed him in several plays while they were at Cambridge, including a critically acclaimed production of Cyrano de Bergerac (which also featured future Deputy Prime Minister Nick Clegg). After finishing university and failing to secure a place at a drama school, he found work in theatre nevertheless.

Hollander's film and television appearances include Absolutely Fabulous, Martha, Meet Frank, Daniel and Laurence, Wives and Daughters, Harry, Cambridge Spies for which he received the FIPA D'OR Grand prize for best actor, Gosford Park, The Lost Prince and Pride & Prejudice for which he received the Evening Standard Film Awards Comedy Award, and London Critics Circle Best Supporting Actor. He has worked repeatedly with Michael Gambon and Bill Nighy and is a good friend of James Purefoy. Although highly respected as a character actor and the recipient of several awards, many of his films will still play on his height (5' 5" / 165 cm). Hollander has created several memorable comedic characters that draw more on his physical energy and intensity than his height, such as the "brilliantly foul-mouthed" Leon in BBC Two's Freezing, described in The Times as a "braying swirl of ego and mania".

Hollander is a cyclist and runner who has contributed his efforts to several charitable causes, including running to raise funds for the Childline Crisis Hotline in 2006, and in 2007, for the Teenage Cancer Trust. He is a long-time supporter of the Helen & Douglas House Hospice for Children and Young Adults in Oxford, which provides hospice care for children, and continues to support charitable organisations by contributing readings and other appearances throughout the year.

He is a patron of the British Independent Film Awards, and has supported the efforts of the Old Vic's "24 Hour Plays New Voices" Gala, which forwards the cause of young writers for the British stage.