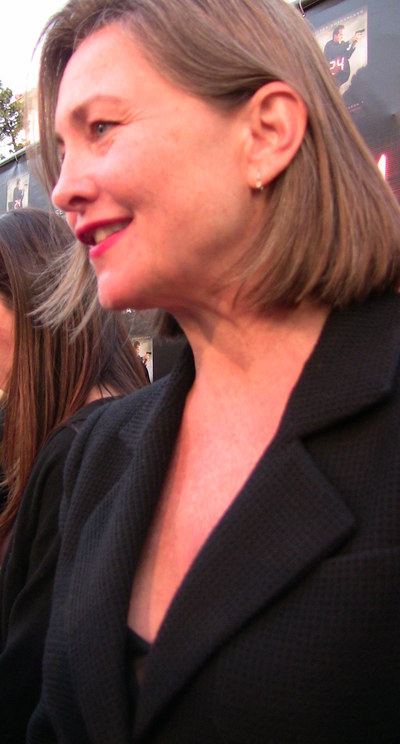 Cherry Jones (born November 21, 1956) is an American actress and recipient of the 2009 Primetime Emmy Award for Outstanding Supporting Actress – Drama Series and the 1995 and 2005 Tony Award for Best Performance by a Leading Actress in a Play. Most recently, she starred as Dr. Evans on NBC series Awake.

Jones was born in Paris, Tennessee, to a high school teacher mother and a flower shop owner father. She is a 1978 graduate of the Carnegie Mellon School of Drama. While at CMU, she was one of the earliest actors to work at City Theatre, a prominent fixture of Pittsburgh theatre.

Jones may be best known for her role as President Allison Taylor on the Fox series 24, for which she won an Emmy. However, most of her career has been in the theatre on Broadway, including her Tony-winning lead performances in Lincoln Center's 1995 production of The Heiress and John Patrick Shanley's play Doubt, a role which earned her the 2005 Tony Award for Best Leading Actress in a Play. The play opened at the Walter Kerr Theatre in March 2005.

Other Broadway credits include Nora Ephron's play Imaginary Friends (with Swoosie Kurtz); Angels in America: Millennium Approaches and Perestroika, the 2000 revival of A Moon for the Misbegotten, and Timberlake Wertenbaker's Our Country's Good, for which she earned her first Tony nomination. She is considered to be one of the foremost theater actresses in the United States.

In 1995, when Jones accepted her first Tony Award, she thanked her then partner, architect Mary O'Connor. When she accepted her Best Actress Tony in 2005 for her work in Doubt, she thanked "Laura Wingfield", the Glass Menagerie character being played in the Broadway revival by Jones's girlfriend, actress Sarah Paulson. The pair had attended the awards together and kissed right after Jones won, thus making it clear that Paulson was not closeted about the relationship. In 2007, Paulson and Jones declared their love for each other in an interview with VelvetPark at Women's Event 10 for the LGBT Center of New York.

Paulson and Jones ended their relationship amicably in 2009.