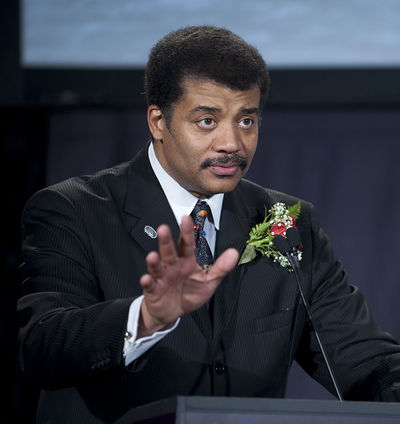 Neil deGrasse Tyson (born October 5, 1958) is an American astrophysicist, cosmologist, author, and science communicator. Since 1996, he has been the Frederick P. Rose Director of the Hayden Planetarium at the Rose Center for Earth and Space in New York City. The center is part of the American Museum of Natural History, where Tyson founded the Department of Astrophysics in 1997 and has been a research associate in the department since 2003.

Born and raised in New York City, Tyson became interested in astronomy at the age of nine after a visit to the Hayden Planetarium. After graduating from the Bronx High School of Science, where he was editor-in-chief of the Physical Science Journal, he completed a bachelor's degree in physics at Harvard University in 1980. After receiving a master's degree in astronomy at the University of Texas at Austin in 1983, he earned his master's (1989) and doctorate (1991) in astrophysics at Columbia University. For the next three years, he was a postdoctoral research associate at Princeton University. In 1994 he joined the Hayden Planetarium as a staff scientist and the Princeton faculty as a visiting research scientist and lecturer. In 1996, he became director of the planetarium and oversaw its $210-million reconstruction project, which was completed in 2000.

From 1995 to 2005, Tyson wrote monthly essays in the "Universe" column for Natural History magazine, some of which were published in his book Death by Black Hole (2007). During the same period, he wrote a monthly column in Star Date magazine, answering questions about the universe under the pen name "Merlin". Material from the column appeared in his books Merlin's Tour of the Universe (1998) and Just Visiting This Planet (1998). Tyson served on a 2001 government commission on the future of the U.S. aerospace industry, and on the 2004 Moon, Mars and Beyond commission. He was awarded the NASA Distinguished Public Service Medal in the same year. From 2006 to 2011, he hosted the television show NOVA ScienceNow on PBS. Since 2009, Tyson hosted the weekly podcast StarTalk. A spin-off, also called StarTalk, began airing on National Geographic in 2015. In 2014, he hosted the television series Cosmos: A Spacetime Odyssey, a successor to Carl Sagan's 1980 series Cosmos: A Personal Voyage. The U.S. National Academy of Sciences awarded Tyson the Public Welfare Medal in 2015 for his "extraordinary role in exciting the public about the wonders of science".

Tyson was born as the second of three children in Manhattan, New York, into a family living in the Bronx. His mother, Sunchita Maria (née Feliciano) Tyson, was a gerontologist for the U.S. Department of Health, Education and Welfare, and is of Puerto Rican descent. His African American father, Cyril deGrasse Tyson, was a sociologist, human resource commissioner for New York City mayor John Lindsay, and the first Director of Harlem Youth Opportunities Unlimited. Tyson's middle name, deGrasse, is from the maiden name of his paternal grandmother, who was born as Altima de Grasse in the British West Indies island of Nevis.

Tyson grew up in the Castle Hill neighborhood of the Bronx, and later in Riverdale. From kindergarten throughout high school, Tyson attended public schools in the Bronx: P.S. 36, P.S. 81, the Riverdale Kingsbridge Academy, and The Bronx High School of Science (1972–76) where he was captain of the wrestling team and editor-in-chief of the Physical Science Journal. He began his interest in astronomy at the age of nine after visiting the sky theater of the Hayden Planetarium. He recalled that "so strong was that imprint [of the night sky] that I'm certain that I had no choice in the matter, that in fact, the universe called me." During high school, Tyson attended astronomy courses offered by the Hayden Planetarium, which he called "the most formative period" of his life. He credited Dr. Mark Chartrand III, director of the planetarium at the time, as his "first intellectual role model" and his enthusiastic teaching style mixed with humor inspired Tyson to communicate the universe to others the way he did.

Tyson obsessively studied astronomy in his teens, and eventually even gained some fame in the astronomy community by giving lectures on the subject at the age of fifteen. Astronomer Carl Sagan, who was a faculty member at Cornell University, tried to recruit Tyson to Cornell for undergraduate studies. In his book, The Sky Is Not the Limit, Tyson wrote:

My letter of application had been dripping with an interest in the universe. The admission office, unbeknownst to me, had forwarded my application to Carl Sagan's attention. Within weeks, I received a personal letter...

Tyson revisited this moment on his first episode of Cosmos: A Spacetime Odyssey. Pulling out a 1975 calendar belonging to the famous astronomer, he found the day Sagan invited the 17-year-old to spend a day in Ithaca. Sagan had offered to put him up for the night if his bus back to the Bronx did not come. Tyson said, "I already knew I wanted to become a scientist. But that afternoon, I learned from Carl the kind of person I wanted to become."

Tyson chose to attend Harvard where he majored in physics and lived in Currier House. He was a member of the crew team during his freshman year, but returned to wrestling, eventually lettering in his senior year. He was also active in dance, in styles including jazz, ballet, Afro-Caribbean, and Latin Ballroom.

Tyson earned an AB degree in physics at Harvard College in 1980 and began his graduate work at the University of Texas at Austin, from which he received an MA degree in astronomy in 1983. Tyson joined its dance, rowing, and wrestling teams. By his own account, he did not spend as much time in the research lab as he should have. His professors encouraged him to consider alternate careers and the committee for his doctoral dissertation was dissolved, ending his pursuit of a doctorate from the University of Texas.

Tyson was a lecturer in astronomy at the University of Maryland from 1986 to 1987 and in 1988, he was accepted into the astronomy graduate program at Columbia University, where he earned an MPhil degree in astrophysics in 1989, and a PhD degree in astrophysics in 1991 under the supervision of Professor R. Michael Rich. Rich obtained funding to support Tyson's doctoral research from NASA and the ARCS foundation enabling Tyson to attend international meetings in Italy, Switzerland, Chile, and South Africa and to hire students to help him with data reduction. In the course of his thesis work, he observed using the 0.91 m telescope at the Cerro Tololo Inter-American Observatory in Chile, where he obtained images for the Calán/Tololo Supernova Survey helping to further their work in establishing Type Ia supernovae as standard candles. These papers comprised part of the discovery papers of the use of Type Ia supernovae to measure distances, which led to the improved measurement of the Hubble constant and discovery of dark energy in 1998. He was 18th author on a paper with Brian Schmidt, a future winner of the 2011 Nobel Prize in Physics, in the study of the measurement of distances to Type II Supernovae and the Hubble constant.

Tyson's research has focused on observations in cosmology, stellar evolution, galactic astronomy, bulges, and stellar formation. He has held numerous positions at institutions including the University of Maryland, Princeton University, the American Museum of Natural History, and the Hayden Planetarium.

In 1994, Tyson joined the Hayden Planetarium as a staff scientist while he was a research affiliate in Princeton University. He became acting director of the planetarium in June 1995 and was appointed director in 1996. As director, he oversaw the planetarium's $210 million reconstruction project, which was completed in 2000. Upon being asked for his thoughts on becoming director, Tyson said "when I was a kid... there were scientists and educators on the staff at the Hayden Planetarium... who invested their time and energy in my enlightenment... and I've never forgotten that. And to end up back there as its director, I feel this deep sense of duty, that I serve in the same capacity for people who come through the facility today, that others served for me".

Tyson has written a number of popular books on astronomy. In 1995, he began to write the "Universe" column for Natural History magazine. In a column he authored for a special edition of the magazine, called "City of Stars", in 2002, Tyson popularized the term "Manhattanhenge" to describe the two days annually on which the evening sun aligns with the street grid in Manhattan, making the sunset visible along unobstructed side streets. He had coined the term in 1996, inspired by how the phenomenon recalls the sun's solstice alignment with the Stonehenge monument in England. Tyson's column also influenced his work as a professor with The Great Courses.

In 2001, US President George W. Bush appointed Tyson to serve on the Commission on the Future of the United States Aerospace Industry and in 2004 to serve on the President's Commission on Implementation of United States Space Exploration Policy, the latter better known as the "Moon, Mars, and Beyond" commission. Soon afterward he was awarded the NASA Distinguished Public Service Medal, the highest civilian honor bestowed by NASA.

Tyson lives in Lower Manhattan with his wife, Alice Young. They have two children: Miranda and Travis. Tyson met his wife in a physics class at the University of Texas at Austin. They married in 1988 and named their first child Miranda, after the smallest of Uranus' five major moons. Tyson is a fine-wine enthusiast whose collection was featured in the May 2000 issue of the Wine Spectator and the Spring 2005 issue of The World of Fine Wine.