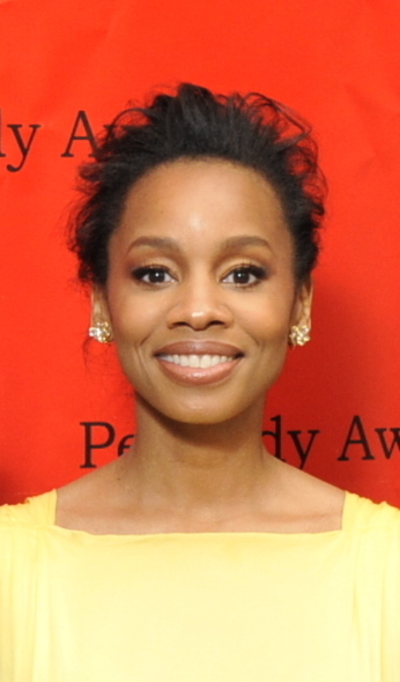 Anika Noni Rose (born September 6, 1972) is an American singer and actress known for her Tony Award-winning performance in the Broadway production of Caroline, or Change and her starring role as Lorrell Robinson in the 2006 film Dreamgirls. She also starred as Tiana, an African American princess in Walt Disney Pictures' 2009 animated film The Princess and the Frog. In 2014, Rose played the role of Beneatha Younger in the Broadway revival of A Raisin in the Sun, for which she was nominated for the Tony Award for Best Featured Actress in a Play. She was named a Disney Legend in 2011.

Rose was born in Bloomfield, Connecticut, the daughter of Claudia and John Rose, a corporate counsel. In her high school freshman year, she appeared in a school production and caught the acting bug. She then attended Florida A&M University where she earned a Bachelor's Degree in theatre, and started studying drama at the American Conservatory Theatre in San Francisco, California.

Rose moved to New York without a job. After three months, she secured the role of Rusty in Broadway's Footloose. She followed Footloose with numerous workshops and two musicals using pre-existing song catalogs, Eli's Comin' Off-Broadway and Me and Mrs. Jones with Lou Rawls in Philadelphia. Both of the full-scale tuners were rumored for transfers, but neither made it anywhere after their limited engagements ended. Rose's big Broadway break was getting cast as Emmie Thibodeaux in Caroline, or Change. In 2004, she was awarded the Theatre World Award, the Lucille Lortel Award for Outstanding Featured Actress, and the Tony Award for Best Featured Actress in a Musical for Caroline, or Change. In 2014, Rose returned to Broadway in a revival of A Raisin in the Sun, receiving a nomination for the Tony Award for Best Featured Actress in a Play.

After her film debut, King of the Bingo Game, she played the role of Kaya in From Justin to Kelly in 2003 and she performed in Temptation in 2004, followed by Surviving Christmas as a singer in the choir. In 2006, Rose starred in Dreamgirls as Lorrell Robinson with Beyoncé Knowles, Jennifer Hudson, Jamie Foxx, and Eddie Murphy. Rose appeared in the films Just Add Water, Razor, and Disney's 2009 animated feature The Princess and the Frog, as the voice of the lead character Tiana; the character is Disney's first African-American princess. Rose hosted a hometown screening of The Princess and the Frog for children from the Charter Oak Cultural Center, a non-profit multi-cultural arts center that provides free after-school programs in Hartford, Connecticut. Rose also stars alongside Jill Scott in The No. 1 Ladies Detective Agency directed by Anthony Minghella.

Rose was named a Disney Legend on August 19, 2011. In 2012, she guest-starred in "Gone Abie Gone", episode 3, season 24 of The Simpsons, voicing Abe Simpson's second wife, Rita LaFleur. The episode originally aired November 11 of that year.

Rose played the adult "Kizzy" in two episodes of television's Roots (2016 miniseries), an adaptation of the novel by Alex Haley and remake of the ground-breaking 1977 miniseries. Critic Alan Sepinwall, in suggesting Emmy nominees to the Academy of Television Arts & Sciences, called her "one of the best parts of the outstanding Roots ensemble." She has a role in the Starz series Power and the leading role in the 2017 BET drama The Quad.