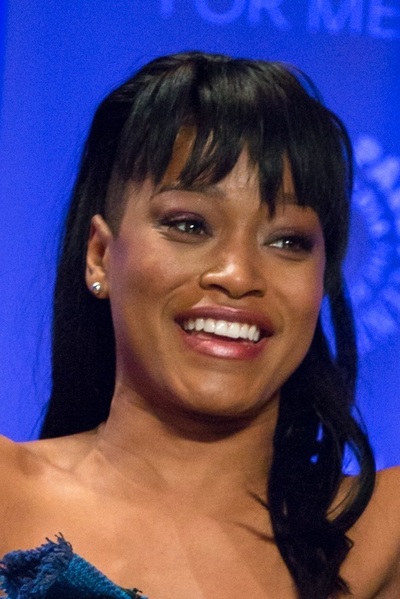 Lauren Keyana "Keke" Palmer (born August 26, 1993) is an American actress, singer, songwriter, presenter and television personality. Palmer was born in Harvey, Illinois and raised in Robbins, Illinois. After Palmer's film debut, Palmer and her family moved to California to help her pursue a career in acting. Palmer released her debut album, So Uncool, on September 18, 2007 through Atlantic Records. The album failed to chart on the US Billboard 200 but did chart at number 85 on the R&B chart. The album was preceded by the lead single "Keep It Movin'".

Apart from her work in music, Palmer is also a recognized actress. She made her acting debut in the 2004 film Barbershop 2: Back in Business and rose to prominence in 2006 for her breakthrough role in Akeelah and the Bee as well as starring in Madea's Family Reunion. Palmer has also starred in films such as The Longshots (2008) and Shrink (2009). In 2012, Palmer starred in four films Joyful Noise, Winx Club: The Secret of the Lost Kingdom, Ice Age: Continental Drift, and Virgin Mary. Besides films, Palmer has also starred in the television films Knights of the South Bronx (2005), Jump In! (2007), and Rags (2012) amongst others. Palmer has also had numerous television roles including the lead role in Nickelodeon sitcom True Jackson, VP. Palmer earned $20,000 per episode of True Jackson, VP, which made her the fourth highest-paid child star on television. She is currently a series regular on Scream Queens, a horror-camp television show, which debuted on the Fox Network on September 22, 2015.

Palmer was born on August 26, 1993 in Harvey, Illinois. Her parents, Sharon and Larry Palmer, who met in drama school, had both worked as professional actors before settling into full-time jobs. Her father works for a polyurethane company, and her mother is a high school teacher who works with autistic children. Palmer first sang in a church but earned exposure performing at a stage show at a Chicago tourist destination.

In 2002, Palmer auditioned for a stage production of The Lion King at age nine. In 2004, she gained her first film role in Barbershop 2: Back in Business, in which she played the niece of American rapper and actress Queen Latifah. After starring in the film, Palmer and her family moved to California, so Palmer could pursue a career in acting. Palmer then pursued a career in singing. In 2003, she participated in American Juniors, the American Idol spin-off series, but her audition scenes were edited out and the show was canceled that year. In 2005, Palmer signed a record deal with Atlantic Records. Her debut single, "All My Girlz", is featured in the Akeelah and the Bee soundtrack. In 2005, Palmer was featured in the television film Knights of the South Bronx, as well as starring in three television programs Second Time Around and ER. In 2005 signed with Disney Channel to star in the show Keke & Jamal, but the pilot was unaired and Palmer left the channel.

On November 18, 2006, she performed at the Home Depot Center in Carson, California for VH1's Save the Music Battle of the High School Marching Bands competition, marking her first ever stadium performance in front of thousands of people. In addition, as part of her contract with Disney, Palmer sang the songs "It's My Turn Now" and "Jumpin'" featured in the Disney Channel Original Movie Jump In!, in which she stars as Mary, the love interest to Corbin Bleu's character. In 2006, Palmer was featured in the music video for the Ludacris and Mary J. Blige song "Runaway Love", in which she starred as a pregnant 11-year-old girl. That same year, she recorded a song entitled "Tonight" which was featured as the first song in the end credits of Night at the Museum. Besides focusing on her music career, Palmer had the lead role in the 2006 film Akeelah and the Bee, in which she played a bright 11-year-old who comes from a poor neighborhood and competes in the Scripps National Spelling Bee. Palmer also had a supporting role in the 2006 film Madea's Family Reunion.

In 2007, Palmer starred in many acting roles, she was a supporting act in the thriller Cleaner alongside Samuel L. Jackson and Eva Mendes. Palmer also had the lead role in the television film Jump In! along with American actor Corbin Bleu. Palmer also starred in two television programs Tyler Perry's House of Payne and Just Jordan. Palmer released her debut album So Uncool on September 18, 2007, though Atlantic Records. The album failed to chart on the US Billboard 200, but did chart at number 85 on the R&B chart. The album was preceded by the lead single "Keep It Movin'". In 2008, Palmer began her starring role as the title character in Nickelodeon sitcom True Jackson, VP. Palmer also wrote and performed the theme song for the series. Palmer earned $20,000 per episode of True Jackson VP, which made her the fourth highest-paid child star on television. In July 2009, designer Jane Siskin created a Walmart fashion line inspired by True Jackson, VP, with all the designs being approved by Palmer. The fashion line consists of jumpers, modern dresses, knit tops, T-shirts, leggings, and more. As well as starring in True Jackson, VP, Palmer starred as the lead role in the 2008 film The Longshots, along with Ice Cube, becoming their second film together after Barbershop 2: Back in Business. In 2009, Palmer had a role in the film Shrink in which she played a patient named Jemma, who is a troubled high school student, and is required to see a therapist by her school after cutting her hand by punching a mirror.

In 2010, Palmer was signed by the Chairman of Interscope Records, Jimmy Iovine, and began working on an album. Between her MySpace and SayNow accounts, she has released several snippets of songs that were recorded for possible inclusion on her sophomore album. In a 2011 interview, Palmer stated the album is complete and is in the process of finalization. The self-titled album will be a mixture of R&B/hip-hop with pop undertones. Producers and writers for the album include Lil Eddie and Lucas Secon. In January 2011, Palmer released her first mixtape Awaken. The mixtape was officially released on January 10, 2011, for downloads on mixtape-downloading websites. The first and only single released from the mixtape was "The One You Call". A music video was also released for the song. It premiered on Palmer's official YouTube channel and iTunes. In 2011 she finished her show True Jackson, VP.

In 2012, Palmer starred alongside Dolly Parton and Queen Latifah in the film Joyful Noise, released in January 2012. She produced and starred in Rags, a Nickelodeon musical film, as well as voice characters in Ice Age: Continental Drift and Winx Club. Palmer has also recently been cast in the upcoming comedy Virgin Mary, opposite Abigail Breslin and Carter Jenkins. In 2012, Palmer spoke on the direction of the album saying "It's definitely a progression. What you would think I'd sound like at my age is what it is. It's a record I can say is truly my own. I was there from the beginning to the end. I was in full control of it, and it represents who I am." In July 2012, Palmer released the single "You Got Me" featuring Kevin McCall. The video for the single was released on July 11, 2012. Palmer has also announced a new single named "Dance Alone". Palmer released a self-titled mixtape Keke Palmer on October 1, 2012. It includes her new singles "You Got Me" & "Dance Alone" which have already been released. Since the release, her mixtape has over 35,000 downloads.

Palmer's first studio album So Uncool was heavily influenced by contemporary R&B, being described as "bright, bouncy, and melodic enough to appeal to teens and pre-teens. Fans of dancey teen pop will want to give this auspicious debut a listen" by cduniverse.com. Palmer was heavily influenced by American R&B singers Beyoncé, Ciara, Janet Jackson, Michael Jackson, Mariah Carey, Aaliyah, Brandy, Mary J. Blige, Whitney Houston, and R. Kelly, as well as girl group TLC. Following the release of her single "I Don't Belong to You" on October 25, 2015, Palmer took to interviewers to explain the meaning behind her song. "I don’t belong to anyone else but myself. I have to make my own decisions. Happiness is defined by me. My sexuality is defined by me. And that can change and this can change and I can make it what I want to make it because I’m the one who makes that choice. So that’s what ‘I Don’t Belong to You’ is saying. This song feels right. It feels right and it’s telling who I am. And it captures my identity." Following the interview, she shared with the world via social media that she now identifies as no label.