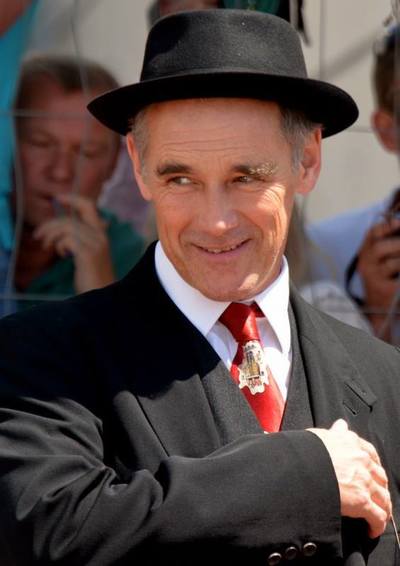 Sir David Mark Rylance Waters (born 18 January 1960) is an English actor, theatre director and playwright. He was the first artistic director of Shakespeare's Globe in London, from 1995 to 2005. His film appearances include Prospero's Books (1991), Angels and Insects (1995), Institute Benjamenta (1996), and Intimacy (2001). Rylance won the Academy Award and the BAFTA Award for Best Supporting Actor for his portrayal of Rudolf Abel in Bridge of Spies (2015).

He played the title role in Steven Spielberg's The BFG (2016), a live-action film adaptation of the children's book by Roald Dahl. He will appear in Christopher Nolan's Dunkirk (2017) based on the British evacuation in World War II, and as James Halliday in Spielberg's 2018 film Ready Player One, based on the novel of the same name.

After training at the Royal Academy of Dramatic Art in London, Rylance made his professional debut at the Citizens Theatre, Glasgow in 1980. He appeared in the West End productions of Much Ado About Nothing in 1994 and Jerusalem in 2010, winning the Olivier Award for Best Actor for both. He has also appeared on Broadway, winning three Tony Awards for Best Actor for Boeing Boeing in 2008, Jerusalem in 2011, and Best Featured Actor for Twelfth Night in 2014.

On television, he won the BAFTA TV Award for Best Actor for his role as David Kelly in the 2005 Channel 4 drama The Government Inspector and for playing Thomas Cromwell in the 2015 BBC Two miniseries Wolf Hall. For Wolf Hall, he also received Emmy and Golden Globe nominations.

In 2016, he was named in the Time 100 list of the most influential people in the world.

Rylance was born in Ashford, Kent, England to Anne (née Skinner) and David Waters, both English teachers. One of his grandmothers was Irish. Both his grandfathers were British POWs of the Japanese during World War II. Rylance has a sister named Susannah, an opera singer and author, and a brother, Jonathan, who works as a sommelier.

His parents moved to the US in 1962, first to Connecticut and then Wisconsin in 1969, where his father taught English at the University School of Milwaukee, which Rylance attended.

Rylance took the stage name of Mark Rylance because his given name, Mark Waters, was already taken by someone else registered with Equity. He returned to England in 1978; at the Royal Academy of Dramatic Art (RADA) in London he trained from 1978–80 under Hugh Cruttwell, and with Barbara Bridgmont at the Chrysalis Theatre School in Balham, London. In 1980, he gained his first professional work at the Glasgow Citizens' Theatre. In 1982 and 1983, he performed with the Royal Shakespeare Company (RSC) in Stratford-upon-Avon and London.

In 1988, Rylance played Hamlet with the RSC in Ron Daniels' production that toured Ireland and Britain for a year. The play then ran in Stratford-upon-Avon. Hamlet toured the US for two years. In 1990, Rylance and Claire van Kampen (later his wife) founded "Phoebus' Cart", their own theatre company. The following year, the company staged The Tempest on the road.

Rylance played the lead in Gillies MacKinnon's film The Grass Arena (1991), and won the Radio Times Award for Best Newcomer. In 1993, he starred in Matthew Warchus' production of Much Ado About Nothing at the Queen's Theatre, produced by Thelma Holt. His Benedick won him an Olivier Award for Best Actor. He took the leading role as British weapons expert David Kelly in Peter Kosminsky's The Government Inspector (2005), an award-winning Channel 4 production for which he won the British Academy Television Award for Best Actor in 2005.

In 2007, Rylance performed in Boeing-Boeing in London. In 2008, he reprised the role on Broadway and won Drama Desk and Tony Awards for his performance. In 2009, Rylance won the Critics' Circle Theatre Award Best Actor, 2009 for his role of Johnny Byron in Jerusalem written by Jez Butterworth at the Royal Court Theatre in London.

In 2010, Rylance starred in a revival of David Hirson's verse play La Bête. The play ran first at London's Comedy Theatre before transferring to the Music Box Theatre on Broadway, on 23 September 2010. Also in 2010, he won another Olivier award for best actor in the role of Johnny Byron in Jerusalem at the Apollo Theatre in London. In 2011, he won his second Tony Award for playing the same role in the Broadway production.

He played Thomas Cromwell in Wolf Hall (2015), BBC Two's adaptation of Hilary Mantel's historical novels Wolf Hall and Bring Up the Bodies. For his performance, he was nominated for the Primetime Emmy Award for Outstanding Lead Actor in a Miniseries or a Movie. Rylance was featured as the castaway on the BBC radio programme Desert Island Discs on 15 February 2015.

Rylance co-starred in the biographical drama Bridge of Spies, released in October 2015, directed by Steven Spielberg, and starring Tom Hanks, Amy Ryan and Alan Alda. The film is about the 1960 U-2 Incident and the arrest and conviction of Soviet spy, Rudolf Abel and the exchange of Abel for U-2 pilot Gary Powers. Rylance plays Abel and has received unanimous universal acclaim for his performance with many critics claiming it as the best performance of 2015. The St. Louis Post-Depatch quoted, "As the deeply principled Donovan, Hanks deftly balances earnestness and humor. And Rylance’s spirited performance is almost certain to yield an Oscar nomination." David Edelstein from New York cited 'It’s Rylance who keeps Bridge of Spies standing. He gives a teeny, witty, fabulously non-emotive performance, every line musical and slightly ironic — the irony being his forthright refusal to deceive in a world founded on lies." Rylance won the Academy Award, BAFTA Award, and New York Film Critics Circle Award in the Best Supporting Actor categories, as well as receiving Golden Globe Award and Screen Actors Guild Award nominations, among other wins and nominations.

Rylance played the title role in Spielberg's The BFG, a film adaptation of the children's book by Roald Dahl. Filming took place in 2015, and the film was released in July 2016. In 2016 Rylance co-wrote and starred in the new comedy play Nice Fish and at St. Ann's Warehouse, New York. The production subsequently transferred to the Harold Pinter Theatre in London's West End. Rylance is to star in Christopher Nolan's 2017 action-thriller Dunkirk based on the British military evacuation of the French city of Dunkirk in 1940 during World War II. He will appear alongside Tom Hardy, Kenneth Branagh, Cillian Murphy and Harry Styles.

In 1995, Rylance became the first artistic director of Shakespeare's Globe Theatre, a post he held until 2005. Rylance directed and acted in every season, in works by Shakespeare and others, including an all-male production of Twelfth Night, in which he played Olivia, and Richard II in the title role. Under his directorate, new plays were also performed at the Globe, the first being Augustine's Oak (referring to Augustine of Canterbury and Christianisation of Anglo-Saxon England) by Peter Oswald, the writer-in-residence, which was performed in 1999. A second play by Oswald followed in 2002: The Golden Ass or the Curious Man.

In 2005, Oswald's third play written for the Globe was first performed: The Storm, an adaptation of Plautus' comedy Rudens (The Rope) – one of the sources of Shakespeare's The Tempest. Other historical first nights were organised by Rylance while director of the Globe including Twelfth Night performed in 2002 at Middle Temple, to commemorate its first performance there exactly 400 years before, and Measure for Measure at Hampton Court in summer 2004. In 2007, he received a Sam Wanamaker Award together with his wife Claire van Kampen, Director of Music, and Jenny Tiramani, Director of Costume Design, for the founding work during the opening ten years at Shakespeare's Globe.

On 8 September 2007 Derek Jacobi and Rylance unveiled a Declaration of Reasonable Doubt on the authorship of William Shakespeare's work, after the final matinée of The Big Secret Live "I am Shakespeare" Webcam Daytime Chat-Room Show, a play in Chichester.

The actual author of Shakespeare's plays was proposed to be Christopher Marlowe, Francis Bacon, Edward de Vere, 17th Earl of Oxford or Mary Sidney (Mary Sidney Herbert, Countess of Pembroke). The declaration named 20 prominent doubters of the past, including Mark Twain, Orson Welles, John Gielgud, Charlie Chaplin, Charles Dickens, Ralph Waldo Emerson and actor Leslie Howard, and was made by the Shakespeare Authorship Coalition duly signed online by 300 people to begin new research. Jacobi and Rylance presented a copy of the document to William Leahy, head of English at Brunel University London. Rylance wrote (co-conceived by John Dove) and starred in The BIG Secret Live 'I am Shakespeare' Webcam Daytime Chatroom Show (A comedy of Shakespearean identity crisis) which toured England in 2007.

Rylance is married to director, composer and playwright Claire van Kampen, whom he met in 1987 while working on a production of The Wandering Jew at the National Theatre. They were married in Oxfordshire on 21 December 1989. Through this marriage, he became a stepfather to her two daughters from a previous marriage, actress Juliet Rylance and filmmaker Nataasha van Kampen. Nataasha died in July 2012 at the age of 28, following which Rylance withdrew from his planned participation in the 2012 Summer Olympics opening ceremony in London and was replaced by Kenneth Branagh.

Rylance has been a supporter of the indigenous rights organisation Survival International for many years. He is the creator and director of "We Are One", a fundraiser that took place at the Apollo Theatre in April 2010. The evening was a performance of tribal prose and poetry from some of the world's leading actors and musicians.

Rylance is a patron of the London-based charity Peace Direct which supports grassroots peacebuilders in areas of conflict, and of the British Stop the War Coalition. He is a member of the Peace Pledge Union, a network of pacifists in the UK. He performed the life and words of Henri, a man living in war-torn eastern Congo, during a presentation in New York City in 2011. He is also patron of The Outside Edge Theatre Company. It works from the perspective of creating theatre and drama with people affected by substance abuse. It provides theatre interventions in drug and alcohol treatment and general community facilities throughout Britain, as well as producing professional public theatre productions that take place in theatres, studio theatres, and art centres.

Rylance became a patron of LIFT (London International Festival of Theatre) in 2013. He said about the festival: "I feel LIFT has done more to influence the growth and adventure of English theatre than any other organisation we have."

Rylance became patron of the London Bubble "Speech Bubbles" project in 2015. "I found a voice through making theatre and am proud to be the patron of Speech Bubbles, which helps hundreds of children to do the same."

Rylance has long been an enthusiastic supporter of Conscience: Taxes for Peace not War, which works to change British tax law to allow Conscientious objectors the right to redirect that portion of their taxes which would usually go to the military into non-violent methods of conflict resolution.

Mark Rylance plays the role of Sully in Bones and All.