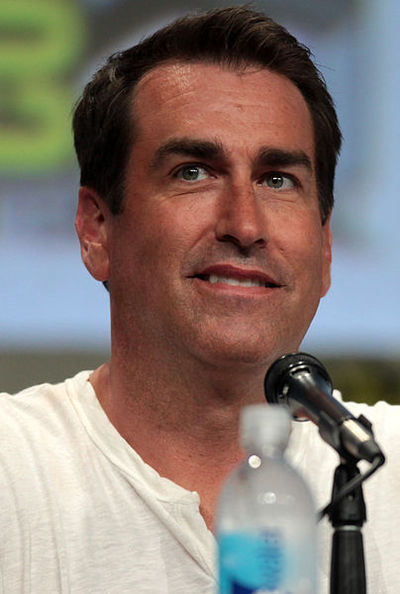 Robert Allen "Rob" Riggle, Jr. (born April 21, 1970) is an American actor, comedian and retired United States Marine Corps Reserve officer. He is best known for his work as a correspondent on Comedy Central's The Daily Show from 2006 to 2008, as a cast member on Saturday Night Live from 2004–2005, and for his comedic roles in films such as The Hangover, The Other Guys, The Lorax, 21 Jump Street, The Goods: Live Hard, Sell Hard, and Step Brothers. As of 2011, he has co-starred in the Adult Swim comedy-action series NTSF:SD:SUV::. Beginning in September 2012, Riggle replaced Frank Caliendo for the comedy skit and prognostication portions of Fox NFL Sunday.

Riggle was born in Louisville, Kentucky, and raised in Overland Park, Kansas, where he attended Shawnee Mission South High School. He later graduated from the University of Kansas, in 1992, with a B.A. in Theater and Film, whilst also attained his pilot's license, and is a member of the Phi Gamma Delta fraternity. He went on to earn a Master of Public Administration degree from Webster University in 1997.

He has a long-standing comedic partnership with comedian Rob Huebel with whom he frequently works with at the Upright Citizens Brigade Theater (UCBT) and in their former improvisational sketch comedy troupe Respecto Montalban. Perhaps the duo's best known creation was their long running two-man show Kung Fu Grip which they often performed at UCBT and other comedy venues for many years. The show was one of the featured acts in the 2004 HBO Comedy Arts Festival. Around this time they began appearing together in several of Comedy Central and VH1's talking head commentary programs such as Best Week Ever and A2Z. They also appeared in Bravo network's 100 Scariest Movie Moments special in 2004. These appearances got the duo their first mainstream exposure to television viewers. The two were instant fan favorites among regular viewers of the VH1 commentary programs. Riggle, Huebel and most of their fellow castmates from Respecto Montalban also performed regularly in comedic sketches on Late Night with Conan O'Brien throughout the late 1990s and early 2000s (decade).

The duo's growing popularity landed them an audition on Saturday Night Live in the summer of 2004. They auditioned together, though only Riggle ended up making the cut. After spending one season on Saturday Night Live from 2004–2005, Riggle soon joined Huebel and many of his other Respecto Montalban castmates in Los Angeles to work on new projects.