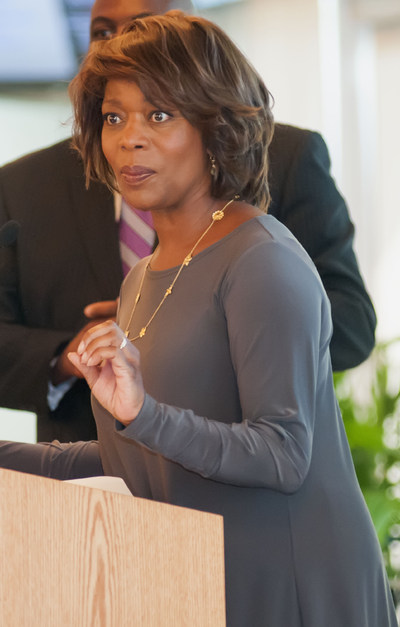 Alfre Woodard (born November 8, 1952) is an American film, stage, and television actress, producer, and political activist. Woodard has been called one of the most versatile and accomplished actors of her generation. She has been nominated once for an Academy Award and Grammy Award, 18 times for an Emmy Award (winning four), and has also won a Golden Globe Award and three Screen Actors Guild Awards.

Woodard began her acting career in theatre. After her breakthrough role in the Off-Broadway play For Colored Girls Who Have Considered Suicide When the Rainbow Is Enuf (1977), she made her film debut in Remember My Name (1978). In 1980 she starred in Robert Altman's Health and in 1983 won major critical praise and was nominated for an Academy Award for Best Supporting Actress for role in Cross Creek. In same year, Woodard won her first Primetime Emmy Award for her performance in the NBC drama series Hill Street Blues. Later in the 1980s, Woodard had leading Emmy Award-nominated performances in a number of made for television movies, and another Emmy-winning role as a woman dying of leukemia in the pilot episode of L.A. Law. She also starred as Dr. Roxanne Turner in the NBC medical drama St. Elsewhere, for which she was nominated an Primetime Emmy Award for Outstanding Lead Actress in a Drama Series in 1986 and for Guest Actress in 1988.

In the 1990s, Woodard starred in films such as Grand Canyon (1991), Heart and Souls (1993), Crooklyn (1994), How to Make an American Quilt (1995), Primal Fear (1996) and Star Trek: First Contact (1996). She also drew critical praise for her performances in the independent dramas Passion Fish (1992), for which she won an Independent Spirit Award and was nominated for a Golden Globe Award for Best Supporting Actress, as wells as Down in the Delta (1998). For her lead role in the HBO film Miss Evers' Boys (1997), Woodard won Golden Globe, Emmy, Screen Actors Guild Awards, and several another awards. In later years she has appeared in several blockbusters, like K-PAX (2001), The Core (2003), and The Forgotten (2004), starred in independent films, and won her fourth Emmy Award for The Practice in 2003. From 2005 to 2006, Woodard starred as Betty Applewhite in the ABC comedy-drama series Desperate Housewives, and later starred in several short-lived series. She appeared in films The Family That Preys (2008) and 12 Years a Slave (2013), and has also worked as a political activist and producer. Woodard is a founder of Artists for a New South Africa, organization devoted to advancing democracy and equality in that country. She is a board member of AMPAS.

Woodard was born in Tulsa, Oklahoma, to Constance, a homemaker, and Marion H. Woodard, an entrepreneur and interior designer. Woodard attended Bishop Kelley High School, a private Catholic school in Tulsa. She studied drama at Boston University, from which she graduated.

Woodard has made numerous appearances in television and motion pictures. She was nominated for an Academy Award for Best Supporting Actress for her performance in the 1983 film Cross Creek. In 1993, she starred in the film Passion Fish for which she was nominated for a Golden Globe Award. She also appeared in the films Heart and Souls, Crooklyn, How to Make an American Quilt, Primal Fear, in Down in the Delta as a single alcoholic mother from Chicago forced to spend a summer with her uncle in Mississippi, and as Lily Sloane, Zefram Cochrane's assistant in Star Trek: First Contact, a performance in the franchise which garnered wide critical acclaim.

In 1997, she starred in the HBO film Miss Evers' Boys, for which she won anEmmy Award, a Golden Globe Award, a Screen Actors Guild Award, a CableACE Award, an NAACP Image Award and a Satellite Awards.

In 2003, Woodard, took part in the HBO film Unchained Memories, a dramatization of WPA slave narratives. From 2005 to 2006, Woodard starred in the ABC series Desperate Housewives, and received another Emmy nomination for her role as Betty Applewhite. Woodard has appeared on stage in such plays as Map of the World, Drowning Crow, Me & Bessie and Shakespeare's The Winter's Tale. She starred in Tyler Perry's latest film The Family That Preys.

Woodard lives in Santa Monica, California, with her husband, writer Roderick Spencer, and their two children, Mavis and Duncan. Woodard follows Christian Science. She is a founder and board member of Artists for a New South Africa and is also active in the Democratic Party. Woodard has also expressed support for same sex marriage.