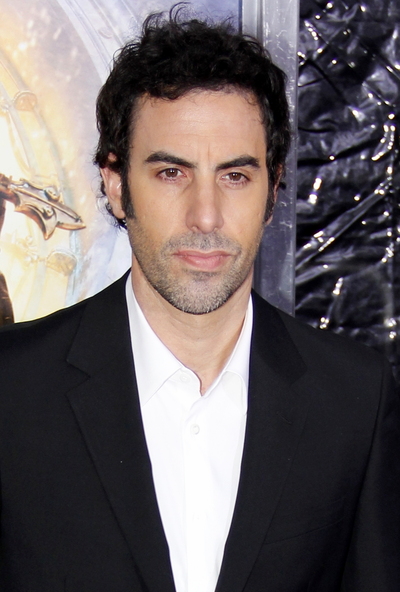 In most of his routines, Baron Cohen's characters interact with unsuspecting people who do not realise they are being set up for comic situations and self-revealing ridicule. His other work includes voicing King Julien XIII in the Madagascar film series (2005–2012) and appearing in Sweeney Todd: The Demon Barber of Fleet Street (2007), Hugo (2011) and Les Misérables (2012). He made a cameo as a BBC News Anchor in Anchorman 2: The Legend Continues (2013). In 2016, he played an English football hooligan brother of an MI6 spy in the comedy film Grimsby, and will play Time in Alice Through the Looking Glass.

Baron Cohen was named Best Newcomer at the 1999 British Comedy Awards for The 11 O'Clock Show, and since then, his work has been further recognised with two BAFTA Awards for Da Ali G Show, several Emmy nominations, a nomination for an Academy Award for Writing Adapted Screenplay, and a Golden Globe for Best Actor for his work in the feature film Borat. After the release of Borat, Baron Cohen stated that because the public had become too familiar with the characters, he would retire Borat and Ali G. Similarly, after the release of Brüno, Baron Cohen stated he would also retire the title character. At the 2012 British Comedy Awards, he received the Outstanding Achievement Award, accepting the award while reprising his Ali G character. In 2013, he received the BAFTA Charlie Chaplin Britannia Award for Excellence in Comedy.

Baron Cohen was born in Hammersmith, west London. His mother, Daniella Naomi (née Weiser), who worked as a movement instructor, was born in Israel. His father, Gerald Baron Cohen, a clothing store owner, was born in London, and raised in Wales. Baron Cohen was raised Jewish. His father's family were Eastern European Jews who moved to Pontypridd, Wales, and London, England, and his mother's family were German Jews. His paternal grandfather, Morris Cohen, had added "Baron" to his surname. His maternal grandmother, who lived in Haifa, Israel, trained as a ballet dancer in Germany. He has two older brothers: Erran and Amnon. Erran is a composer and has worked on several of Sacha's films. Baron Cohen's cousin, Simon, is an internationally renowned autism researcher.

Baron Cohen was educated at The Haberdashers' Aske's Boys' School, an independent school in Elstree, Hertfordshire, north of London. He went on to the University of Cambridge, entering Christ's College, Cambridge, where he read history, graduating in 1993 with upper second class honours. While attending the Cambridge University Amateur Dramatic Club, Baron Cohen acted in the plays Fiddler on the Roof and Cyrano de Bergerac, and performed in Habonim Dror Jewish theatre performances.

After leaving university, Baron Cohen worked for a time as a fashion model, appearing in many fashion magazines. By the early 1990s, he was hosting a weekly programme on Windsor cable television's local broadcasts with Carol Kirkwood, who later became a BBC weather forecaster. In 1995, Channel 4 was planning a replacement for its series The Word, and disseminated an open call for new television presenters. Baron Cohen sent in a tape of himself in the character of Kristo, a fictional television reporter (who developed into the Kazakh Borat Sagdiyev), which caught the attention of a producer. Baron Cohen hosted Pump TV from 1995 to 1996. Peter Sellers, known for portraying a wide range of comic characters using different accents and guises, was referred to by Baron Cohen as "the most seminal force in shaping [his] early ideas on comedy".

In 1996, he began presenting the youth chat programme F2F for Granada Talk TV and also had a small role in an advert for McCain Microchips playing the role of a chef in a commercial entitled "Ping Pong". He took clown training in Paris, at the Ecole Philippe Gaulier, studying under master-clown Philippe Gaulier. Of his former pupil, Gaulier says: "He was a good clown, full of spirit". In the late 1990s, Baron Cohen made his first feature film appearance in the British comedy The Jolly Boys' Last Stand. In 2000, Baron Cohen played the part of Super Greg for a series of TV advertisements for Lee Jeans; the advertisements never aired but the website for Super Greg created an internet sensation.