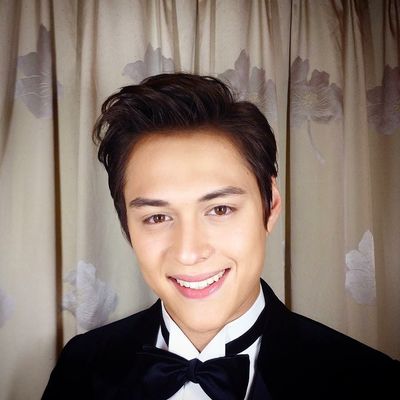 Enrique Mari Bacay Gil V (Tagalog: [ɛnˈɾikɛ ˈhil]; born March 30, 1992) is a Filipino actor, dancer and singer. He has appeared in various films and television shows such as Mula Sa Puso, Budoy, Muling Buksan Ang Puso and She's the One. He is best known for his role as Alexander "Xander" Grande III in the television series Forevermore in 2014–15, alongside Liza Soberano. Since then, he has starred in the films Just The Way You Are, Everyday I Love You, Dukot, and the drama television series Dolce Amore. In 2017, he starred in the romantic comedy film My Ex and Whys and comedy dram film Seven Sundays. In 2018, he leads the cast in the television drama fantasy series Bagani.

Enrique was born on March 30, 1992 in Cebu City. He is the second son of Enrique Amadeo Gil III and Barbara Anne Bacay. His father is half Spanish while his mother is of Filipino, and Spanish descent. He has an older brother named Enrique Javier (Javy) and a younger sister named Diandra Frances (Andie). His parents used to work as flight attendants for Philippine Airlines. He finished grade school at the Montessori De Manila in March 2004, a private institute inside the BF Executive Village (Venice Street) in Las Piñas, and secondary school in March 2008 from Manresa School in Parañaque. He then went to San Beda College Alabang to pursue Information Technology, but he decided to put his studies on hold because he wanted to focus on his acting career. He is a cousin of Paul Salas and is also related to Dingdong Dantes.

Enrique started acting in the summer of 2008. He was 16 years old then, and boredom led him to enroll in commercial modeling and musical theater workshops conducted by Trumpets. He appeared in a series of TV commercials, including a Lewis and Pearl's ad, alongside Coleen Garcia. He was later launched as part of Ae landed his first television role in the action-drama series Pieta where he played Harold. Before Pieta, he has made a cameo appearance in I Love Betty La Fea as one of the Ecomodels.

In 2009, during the taping of Pieta, his mom convinced him to audition in the sitcom George and Cecil. As soon as head writer and director Joey Reyes saw Enrique, he immediately cast him to be on the show. Later he was also cast in the indie film Pitas as a brother of the lead actress, Kristel Moreno.

In 2010, he co-starred in the indie war film Diego and His Brothers. He joined ASAP XV as one of Star Magic's "Gigger Boys" in April and in May, co-starred in the teleserye Rosalka, in which he played the character of Andrew. He was originally set to appear in Kokey @ Ako, but his character was written off in favor of Jason Francisco. In October, he was given the role of Joco, the younger brother of Paolo Barredo (Gerald Anderson), in the film Till My Heartaches End. He also got his first hosting stint in the ABS-CBN teen variety show, Shoutout!

In 2011, Shoutout! was revamped and renamed to Shoutout!: Level Up, but the show was eventually cancelled due to poor ratings. He played Jim in the 10th episode of Your Song Presents: Kim. He got his break when he was cast to play Michael Miranda — originally played by Diether Ocampo — in the 2011 remake of Mula Sa Puso. He played Troy Cabrera in Good Vibes. Gil admitted, during the Good Vibes press conference, that he was set to appear in the ABS-CBN's remake of María la del Barrio but had to let go of his role due to conflicting schedules. He replaced Albie Casiño in the Star Cinema film Way Back Home — the film debut of Kathryn Bernardo and Julia Montes. He appeared as BJ Maniego in Budoy. He was featured in Zia Quizon's Music Video debut entitled Ako Na Lang.

In 2012, he starred as Dasho Jao Rinpoche in Princess and I. He was also cast in the movie The Reunion, a Filipino teen romantic comedy film directed by Frasco Mortiz and was included in the movie Amorosa, making this his first horror film. Later in the year, he appeared in The Strangers, one of the official entries for the 38th Metro Manila Film Festival. This was his first MMFF movie.

In 2013 Gil joined the PETA campaign Free Mali to transfer her from the Manila zoo to Boon Lott's Elephant Sanctuary in Thailand. Mali is the only captive elephant in the Philippines and has been in captivity for the majority of her life, alone, in a tiny enclosure and in need of proper care. On the same year, he was featured in Myrtle Sarrosa's Mr. Kupido music video, which was released in February. Enrique also portrayed Senate President Juan Ponce Enrile on Maalaala Mo Kaya. Following this, he appeared in a number of new projects such as Muling Buksan Ang Puso series, alongside Julia Montes and Enchong Dee.

In September 2013, it was announced that he will be part of the movie She's The One with Bea Alonzo and Dingdong Dantes; many considered this his breakthrough film as an actor. He released a debut dance album under Star Records entitled King of the Gil. Later in the year, Gil conquered the Smart-Araneta Coliseum for his first dance concert with Special guests Angel Locsin, Vice Ganda, Kim Chiu, Kathryn Bernardo, Vhong Navarro, Jhong Hilario, Arron Villaflor, Rayver Cruz, Martin del Rosario, Arjo Atayde, Ejay Falcon, gloc-9, Young JV, G-force, The Streetboys and his co-star from The Reunion, The Strangers and Muling Buksan Ang Puso leading lady Julia Montes. Before proving his dancing prowess in his King of the Gil concert, Gil debuted on radio drama via "Dear M.O.R. Special" on "My Only Radio (MOR) 101.9 For Life!" and "MOR TV." He portrayed Carlo, a hopeless romantic guy who gives everything to his liberated and dominant girlfriend Lois, who will be played by FM radio's first-ever roving DJ and Darling ng Masa Eva Ronda.

In 2014, he replaced Kiko Estrada in the fantasy series Mirabella — the debut project of Julia Barretto. On February 26, the wattpad author HaveYouSeenThisGirL admitted via Twitter that Gil was really supposed to be in the film adaptation of Diary ng Panget but refused to tell why it didn't push through. On March 1, he launched his single "Do The Moves" with Sarah Geronimo and apl.de.ap. Its youth-oriented music video was released on March 8. March 16, Gil confirms that he is part of the film The Trial as Martin, the best friend of Ronald (John Lloyd Cruz). On May 18, Gil was awarded as the Most Promising Male Star of the Year at the 45th Box Office Entertainment Awards of the Guillermo Mendoza Memorial Scholarship Foundation. On June 25, Star Cinema announced that Gil alongside Liza Soberano will lead the film adaptation of Kimberly Joy Villanueva's novel The Bet. On August 21, Gil took part in ABS-CBN Philharmonic Orchestra's debut album "Decades of OPM" together with Abra doing their version of "Totoy Bibo." Following this, he was cast in a lead role for the 2014 romantic drama television series Forevermore as the rebellious, broken hotel company heir Alexander "Xander" Grande III who falls in love with a simple farmer girl, Maria Agnes Calay, played by Liza Soberano.

In October 2015, after their hit film Just The Way You Are, Enrique Gil and Liza Soberano starred in a romantic movie, Everyday I Love You, this time with actor Gerald Anderson. In the movie, Gil plays Ethan, who falls in love with Bacolod lass Audrey (Soberano), who is in a relationship with Tristan (Anderson).

In February 2016, following the phenomenal success of Forevermore, Gil and Soberano returned to prime time to give viewers a taste of love's sweetness in the romantic drama, Dolce Amore, in which he played the role of Simon Vicente "TenTen" Ibarra, a poor and hardworking Manila boy who will do anything for his family. In July 2016, Gil was the lead actor in the action movie Dukot, which was based on a real kidnapping incident in the country more than eight years ago. It was helmed by director Paul Soriano and was co-produced by Star Cinema.

In 2018, he was cast in the role of Lakas, a warrior in the television drama and fantasy series Bagani. The show debuted at Number 1 in its time slot, and consistently ranked ahead of its competition during its five-month run.

In September 2015, Gil involved in an altercation on an airplane. Gil's inebriation caused him to reportedly bother actress Jessy Mendiola, prompting actor Luis Manzano to step in. On September 11, Gil issued a public apology for the incident.